Mark of the Dragon

A Mark of the Dragon, known as a Dragon Birthmark (竜の痣 Ryuu no Aza) in the Japanese version, is a special mark that indicates that a person is a Signer. The symbol of the dragon is the Ouroboros, which is either a dragon, a lizard or a serpent biting its own tail. The symbol represents unity, infinity or a never ending cycle.

When the star shined, the King knew it would be a message from their god, the Crimson Dragon. The dragon was then Summoned to imprison an incarnation of an ancient evil in the earth. This evil is represented in the Nazca Lines.

According to legend, the Crimson Dragon could only be Summoned with the help of the Signers, whose individual marks either represented the Heart, Hand, Tail, Wings, Foot and Head of the dragon. These people were being searched for by a group known as Iliaster, disguised as the Sector Security. According to what Rex Goodwin told Yusei, he organized the Fortune Cup not only to confirm the identities of Yusei Fudo, Akiza Izinski and Luna as Signers, but also in order to awaken their powers so that they could fight against their nemesis, the Dark Signers.

The Head and Tail Marks of the Dragon have been possessed by three other individuals in addition to those listed above.

Roman Goodwin's arm once possessed the Head Mark, but was then severed from his body when Roman became a Dark Signer. Rex then attached Roman's severed arm to himself through the powers of the Dark Signers though he stated that there was some resistance. Regardless he was able to call forth the marks of the other Signers as well. Towards the end of episode 64, Rex lost his Head Mark when it transferred to Yusei, and Yusei's Tail Mark then selected Crow as its new owner.

In the dub, Yusei assumes that his birthmark is the Head (which at the time was the Tail) after seeing Yanagi's sketch of the Crimson Dragon. However, it is proven to be a mistake as in the dub of episode 62 Rex confirms that his brother's mark is the Head and not the Tail.

The Marks of the Dragon indicate a deep connection between the Signers, and represent this by glowing and throbbing at certain times, such as when a Signer is about to Duel against a Dark Signer.[1]

The marks also rival the Dark Signer's dark mark. Whenever a Signer is in the presence of one of the Dark Signers, both of their marks react.[2] At times the Signer's mark will pulse very painfully on the arm it's on.[3]

The marks give the Signer in question powers and abilities that no normal being possesses. They can be used to locate other Signers if they focus enough, even if the Signer in question is moving. So far, only Akiza used this ability to locate Yusei when he was kidnapped by a rival team.[4] Also, a Mark of the Dragon will always shield the Signer itself or any companions close to them from harm or any other effect, like having their souls absorbed into an Earthbound Immortal or changes in the timeline.[5][6]

It is also shown that the marks allow them to see the Divine Temple.[6] Anyone else touching the Signer is able to see it as well.[7] They also allow the Signer to activate the small, Ener-D reactors in his Duel Runner and continue to ride it, when all others in the city have stopped functioning.

In Yu-Gi-Oh! 3D Bonds Beyond Time, the mark gives the ability to communicate with both Duel Monster and human spirits. 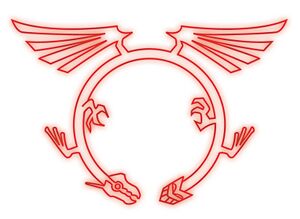 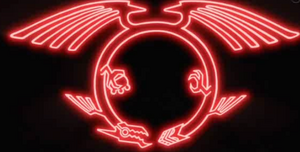 It is possible for a Signer to, temporarily, take control of all 6 Marks of the Dragon at once as the entire Crimson Dragon's seal, however the criteria for doing so is sketchy. Yusei Fudo, Jack Atlas, Rex Goodwin and Leo are the only Signers (past or present) to have done this, with the Legendary Signer (who possessed the whole mark on his chest) being the only one to (apparently) do so at will. Rex Goodwin was the second Signer to have the entire seal on his chest (as opposed to the others who had it on their back) due to him having the condor mark on his back (but unlike the Legendary Signer (who had it on his left pectoral, over his heart), Rex had it in the middle of his chest).

Yusei and Jack did this inadvertently while trying to save Kalin Kessler and Carly Carmine, respectively, and possessing all 5 marks allowed them to draw "Majestic Dragon", with which to summon their respective Majestic Synchro Monsters. Rex was instead able to do so at will during the 3-vs-1 Shadow Turbo Duel against Yusei, Jack and Crow Hogan. However doing so did not seem to afford him anything non-cosmetic. Yusei was also able to take control of all 5 marks at the end of his Duel with Primo. Leo obtained the seal after being on the verge of death. While at this, the Heart Mark formed itself along Luna's Hand Mark within the seal, thus revealing it's true form of the original seal.

In episode 150, Yusei receives again the Marks from his friends, and his clothes along with his Duel Runner turn gold when he is about to perform an Over Top Clear Mind.

in Yu-Gi-Oh! 3D Bonds Beyond Time, The completed mark appears again on Yusei's back. It allowed him the ability to travel through time on his Duel Runner to save Maximillion Pegasus from Paradox with the help of Jaden Yuki and Yugi Muto. It also allowed Yusei to use the Crimson Dragon to defend Jaden from a blast from Paradox's monster. 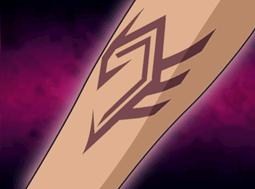 The player's Mark of the Dragon

In Yu-Gi-Oh! 5D's World Championship 2009: Stardust Accelerator, the player's character has a Mark of the Dragon on their arm. This mark was artificially placed there by Rex Goodwin in an attempt to awaken the Crimson Dragon. It is possible this mark is meant to represent the Crimson Dragon's body.

In Yu-Gi-Oh! 5D's World Championship 2010: Reverse of Arcadia the player's character gets a Mark of the Dragon at the end of the game. Which mark is not clear since the full mark of the Crimson Dragon is shown. The three main theories are that the player receives the Head, as Yusei doesn't mention a change in his mark, the Tail, giving Yusei the Head, or an unknown mark such as the Body mark, which returns from WC09, as The Shining Darkness is not available in-game, and therefore, Crow does not have Black-Winged Dragon in the game.

Interestingly, in Yu-Gi-Oh! 5D's World Championship 2009: Stardust Accelerator and Yu-Gi-Oh! 5D's World Championship 2010: Reverse of Arcadia, the Crimson Dragon full mark already had the Heart Mark on it. Whether this was an oversight or intentional foreshadowing is unclear, as Stardust Accelerator was released in Japan the day after the Japanese air date of Episode 51, the same with Reverse of Arcadia and Episode 97.

In Yu-Gi-Oh! Duel Links, the Marks of the Dragon are represented by Skills that add that character's relevant Signer Dragon to the Extra Deck and two copies of an appropriate Tuner to the Main Deck.

The full Mark of the Dragon is visible on Dark Signer Rex Goodwin's chest.