Yusei's kidnapping and recruitment by the Boss's evil scheme is put to an end by Akiza. However the 2 of them are confronted by an unknown Turbo Duelist who appears and challenges Yusei to a Turbo Duel.

Yusei Fudo wakes up suddenly finds himself in a dark place. While searching around, he quickly discovers that he is in a moving vehicle and trapped. It all comes back to him when he finds his Duel Runner, remembering that he had received a call for his services and was to be expected at a certain house. However, when he heard a shout coming from the inside, he quickly made his way inside. Only to discover that it was a set-up, while he was swiftly ambushed.

Trailer on which Yusei is kept

After that a screen lights up and a mysterious man appears on it. As Yusei asks who he is, he introduces himself as Boss from the Tour Riding Group. Yusei is puzzled at why such organization would do that. However Boss tells him that those others who really don't know this group assumes. After Yusei asks him why he was abducted, Boss reveals that because Yusei is the winner of the Fortune Cup, Boss intends to make him recruit onto his team for the World Racing Grand Prix. Though Yusei obviously declines stating that he already will enter in with his long time friends, Jack Atlas and Crow Hogan. Boss clarifies that he doesn't care; assuming that no matter what Yusei will join them. As he reveals that they will even use their doctor's psychology in Yusei so that he can achieve this goal. As Yusei replies that that sort of thing wouldn't be allowed, Boss abruptly states that it will, as only they and he know about this and no one else.

Meanwhile Jack, Crow, Mina and Akiza organize a search party to look for Yusei. As they are receiving a different call about Yusei's capture, though the guys think that instead all may be a prank. Still Akiza tells them that they have to make sure that it isn’t, thus Jack states that when it comes to any situation involving Yusei she… However this statement doesn’t continue over Akiza’s madly and scaring expression over that comment. 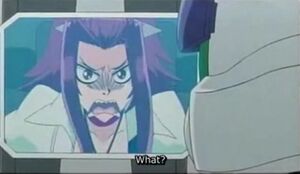 Suddenly they “intercept” a call made by a mysterious man in which he says that they have caught Yusei. He tells them where they are heading and that they better hurry up before his friends find him. After the call cuts, Mina and Akiza head towards the West Route where the truck holding Yusei is.

Once they are there, suddenly Akiza’s Mark of the Dragon begins to glow enabling her to feel his presence. As they pass through a highway, she then becomes aware of his location on a particular truck.

As Akiza tells this to Mina, the 2 of them then take another route in order to be on the same roadway as the truck. As they close again the Crimson mark painfully activates, with it Akiza then concludes that Yusei is on a trailer that’s driving in front of them.

As Yusei's Dragon mark also is active, Mina and Akiza get close and after discovering that there’s no one driving the trailer. So therefore with no way to make it stop, Akiza then has no other choice than to use her psychic powers. 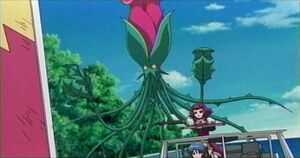 Therefore she activates her Duel Disk and summons "Rose Tentacles" ordering it to whip the shut door and with this, her monster then proceeds. As it began whipping the door, this ultimately begins to smash up. As Yusei is perplex at what is causing this, Ichiro and his henchmen also notice this through the screen.

Though Mina becomes concerned about Akiza using her powers, she tells her not to worry as she can control this power now. After Rose Tentacles is finally able to crack the door open, Yusei is surprised to see Akiza. After this, Ichiro orders his employees to make the truck go up faster in order to destroy his Duel Runner.

As the trailer then speeds up, it begins losing control making Rose Tentacles fall off and disappear. As Mina and Akiza still manage to catch up with it, as Yusei warns Akiza, she impulsively jumps to one of the doors. As Yusei helps her get on board, the door falls off taking her Duel Disk along with it. 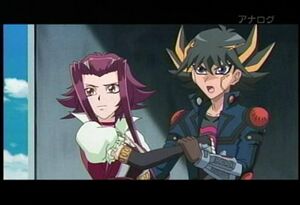 Yusei and Akiza in the truck after it loses its control

However Mina loses their sight as the car gets ruined in the process, though she then sees a Duel Runner passing by. Meanwhile knowing that at any moment the truck may fall off the road, Yusei heads towards his Runner. He then throws to Akiza one of his helmets and tells her to get on the Runner.

However she’s not happy with this at all, as she knows that only one person can be on it. Though Yusei denies this and tells her that there’s not enough time before they perish. Thus Akiza gets on; warning him that if she doesn’t return home safely, he’ll be sorry for this.

As there about to jump off, the mysterious Turbo Duelist from before appears in front off them. It then immediately challenges him to a duel, making him suspect that it might be one from the same group that took him. Thus at the time the truck is about to fall off the road, Yusei and Akiza escape from it, jumping back into the road aboard the Duel Runner. 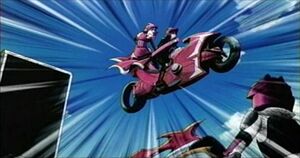 As soon as they land back on, it automatically and unexplainable, enters into the autopilot Duel Mode. As Yusei’s new enemy then follows after them, it forces Yusei to a Turbo Duel, by threatening there is a bomb in his Duel Runner and if he stops, it'll explode.

Thus even with his replies at why recur to that, the mysterious Turbo Duelist activates Speed World 2. Thus as the 3 of them are detoured to the dueling lane’s, Elsworth is seen watching everything and then setting off in his own Duel Runner.

Thus since there is no turning back from this, Yusei tells Akiza to hold on tightly.

The Turbo Duel then officially begins, with Akiza as a close up spectator, realizing that it will be her first time to see Yusei's perspective when he’s Turbo Dueling. 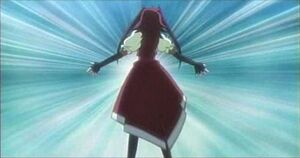 Akiza notices that even though this is just a normal duel for them, it still is very different from a Psychic Duel too. She also then wonders what unusual feelings are evoking at that very moment.

After Sherry summons her ace monster, she stops in the middle of the duel. Yusei then realizes that the bomb was just a bluff, so he stops his Duel Runner too. As he tells Sherry to reveal her identity, she immediately takes off her helmet revealing her appearance. 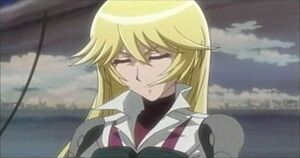 As she does, Akiza is surprised to see a female Turbo Duelist. As Sherry apologizes for the fake bomb threat, she says that she needed to test his skills and that her goal is to have Yusei join her team and no one else’s.

3/1300/500) in Attack Position. Yusei then activates the effect of "Junk Synchron" to Special Summon "Speed Warrior" (

2/900/400) from his Graveyard in Defense Position with its effects negated. Yusei then tunes "Speed Warrior" with "Junk Synchron" in order to Synchro Summon "Junk Warrior" (

2/400/200) in Attack Position. She then tunes "Centaur Mina" with "Fleur Synchron" in order to Synchro Summon "Fleur de Chevalier" (

8/2700/2300) in Attack Position. Sherry's hand contains "Chain Close", "Apprentice Knight", and "For Our Dreams". Since "Fleur Synchron" was used for the Synchro Summon of a Synchro Monster, its effect activates, allowing Sherry to Special Summon "Apprentice Knight" (

The following changes were made in the English dub:

Cards that made their debut in this episode are in italics.