Primo uploads Yusei Fudo's new riding program into a legion of Duelbots. Meanwhile, Yusei and Lazar are locked in by a robot in control of a Lock Deck. With some strategic card-playing, Yusei manages to Summon "Stardust Dragon" and win the Duel.

Turn 6: Guard Robot
The Guard Robot draws a card and subsequently sets it.

3/800/300) in Attack Position. The effect of "Summon Pass" activates, allowing the Guard Robot to draw one card. Yusei guesses Trap Card and the robot reveals, the Trap Card, "Barrel Behind the Door".

Turn 9: Yusei
Yusei draws "Double Cyclone" and subsequently activates it to target his face-down "Graceful Revival" and the Guard Robot's "Counter Force" and destroy them, but the Guard Robot activates its face-down "Solemn Judgment" to negate the effect of "Double Cyclone" and destroy it by paying half its Life Points (Guard Robot 3500 → 1750). The effect of "Counter Force" activates, giving it a fourth Charge Counter.

3/0/2000) to Attack Position. Due to this action, the effect of "Lock Dragon" is no longer applied to both players. 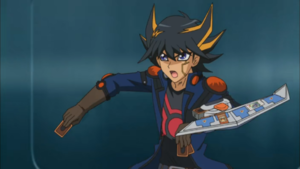 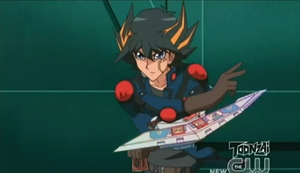