"Trouble for Team 5D’s", known as "Burn! Phoenixian Cluster Amaryllis" in the Japanese version, is the ninety-ninth episode of the Yu-Gi-Oh! 5D's anime.

Jack loses against Andre and so the next in line for Team 5D's is Akiza.

After Jack loses against Andre, he ends up crashing along with his Phoenix Whirlwind/Wheel of Fortune. Yusei then hurries to try to help him, but Jack stops him by reminding Yusei of one of the rules of the WRGP, which forbids a person from helping them, disqualifying the team if one does so. Still injured, Jack picks up his damaged Duel Runner and begins pushing it all the way to the pits, all this with an effort while stating that he won’t let their dream end up in there.

Jack pushes his Phoenix Whirlwind up to where Akiza is waiting. Meanwhile on the stand, Mina Carly and Stephanie observe what has happened to him and all rush to the pits. However, another problem for Team 5D's arises. According to another rule of the tournament, the winner of one round is allowed to keep doing laps before the new teammate is brought onto the track. As he does so, Andre’s Speed Counters will increase for each lap until they reach the maximum of 12. After that, Team 5D’s Speed Counters will start decreasing. Once they reach zero, the team will automatically lose.

Yusei tells Akiza to get ready, but as she does, he notices her being nervous. Yusei then tells Akiza to look at the crowd, from where her parents are currently watching. A flashback is shown where Akiza tells her parents about participating in the Prix. Though Setsuko tells her that it is dangerous, Akiza states that she wants to fight using a Duel Runner along with her friends. To that, Hideo understands and encourages his daughter to show them what she can do. Yusei then reminds Akiza that her current self isn’t alone anymore. 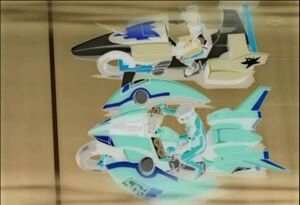 Jack then finally arrives to where Akiza is, urged on by the fact that they have only one Speed Counter left. With a final effort, he reaches her, and with that, Akiza races off from the pits. Fortunately, she meets up with Andre in time. They both race for the first corner, as she needs to take the first turn if the Team’s match duel is to continue. And luckily, Akiza gets the first turn. After seeing this, Jack faints and is taken to the emergency room by Mina, Carly and Stephanie.

Before the Duel commences, Andre states that using the overboost system is starting to slow him down. Still, he prompts for Akiza to face him.

Beginning of the Second Duel[edit]

Akiza aggressively commences to damage Andre's life points with the attack and effect of her Phoenixian Cluster Amaryllis. To this move, Breo and Jean comment and notice that she going all out. This is because of the overwhelming disadvantage she has against Andre: the fact that Team Unicorn’s Speed Counters are at max, meaning that Andre can activate any Speed Spell.

Meanwhile, Andre figures out what Akiza's strategy is, and finds a way to counter it. He not only gets rid of her monster, but he also is able to revive Thunder Unicorn and inflict some major damage to Akiza. In the pits, Breo and Jean comment that Andre could had finished her by using Speed World 2’s damaging effect, but he didn’t do it because that would mean fighting Yusei with 0 Speed Counters.

On Team 5D's side, Leo and Luna are worried. However, Yusei tells them that he gave Akiza a secret plan. As everyone asks what this plan is, he tells them to just continue watching. Yusei himself then hopes that Akiza will use that card to reverse the situation. 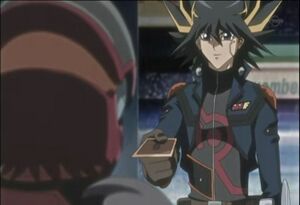 Though Akiza herself is worried, she recalls that moment after Yusei told that she is not alone anymore. At that time he gave her a card telling to go. Upon noticing what card it is, Yusei states that her opponent won’t think of her using that card, and that's where a chance lies. After this, he tells her to have fun with her Turbo Duel.

Akiza remarks on how what this fun is, implying that the plan is a reckless one. Still, she will respond to Yusei's wish. Akiza then makes her move and Summons her ace monster, "Black Rose Dragon", at which Andre is concerned. However, in a move that surprises him, she is able to play the card Yusei gave her -- "Stardust Dragon". Everyone else is also surprised, including most of her own team, and Akiza then attacks Andre's monster and is close to winning. At the last moment, however, he dismantles her team attack.

Towards the End of the Duel[edit]

After this move, Jean points to Andre not to hold back anymore, as the appearance of "Stardust" is somewhat troubling. With this, Andre tries to beat "Stardust" and Akiza with one attack. Although "Stardust" is destroyed, Akiza uses a Trap to reduce the damage, keeping her alive but badly damaged, down to only 800 Life Points.

Andre plans to finish her off with the same move he used against Jack. But Akiza's final move ruins his move by sacrificing her remaining Life Points to activate "Wicked Rebirth" and bring "Stardust" back. Andre has decreased his Speed Counters for nothing, and as he reflects on this, he states that her move was a good one. 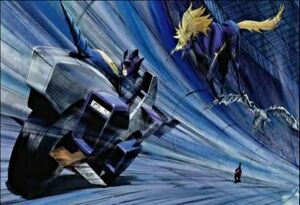 Akiza reaches the pits and says to Yusei that she is sorry that she couldn’t do anything. However, Leo and Bruno state that this isn’t true, and Yusei says to her to leave the rest up to him. Still, after he leaves from the pits, she cries, but Crow tells her to instead look at the crowd. Out there, Hideo and Setsuko try to cheer her up, and seeing this, the rest of the crowd applauds to her. To this, Akiza thanks her parents and friends.

After this, the MC states that in order for Team 5D's to reverse the situation and win, Yusei must now defeat 3 opponents in a row.

Jack has just lost to Andre. While Jack struggles to get up and pass the baton to Akiza, Andre takes this moment to take laps and gain Speed Counters for each full lap. He takes twelve laps, giving him twelve Speed Counters (Andre's SPC: 0 → 12). Andre then proceeds in taking more laps and for each full lap he makes, Jack loses one Speed Counter. If Jack's SPC becomes 0 this way, Team 5D's will automatically lose. Andre takes three laps and removes three of Jack's Speed Counters (Jack's SPC: 4 → 1). Jack, at the last second, gives the baton to Akiza, allowing her to move forward and Duel Andre. Akiza makes it to the corner before Andre, so the Duel between them can proceed as normal.

As the WRGP system works like a survival match, Andre starts off with 2700 Life Points and 12 Speed Counters, whereas Akiza starts off with 4000 Life Points and 1 Speed Counter. The field also stays from the previous duel, so Andre still has his field from his duel with Jack Atlas ("Unicorn Knight" in Attack Position), while Jack left no cards on his field for Akiza to use.

2/800/0) in Attack Position. She then sends "Phoenixian Seed" to the Graveyard in order to Special Summon "Phoenixian Cluster Amaryllis" (

2/100/600) in Attack Position. Andre then activates the effect of "Unibird" to remove itself and "Phoenixian Cluster Amaryllis" from play and revive "Thunder Unicorn" (

4/1700/1200) in Attack Position. Akiza then activates the effect of "Witch of the Black Rose" to draw one card ("Rose Fairy"). Since Akiza added "Rose Fairy" from her Deck to her hand via a card effect, she Special Summons "Rose Fairy" (

3/600/1200) from her hand in Attack Position. Akiza then activates "Speed Spell - Angel Baton" to draw two cards ("Half Counter" and "Wicked Rebirth") and send one card ("Glow-Up Bulb") from her hand to the Graveyard. Akiza then tunes "Rose Fairy" with "Witch of the Black Rose" in order to Synchro Summon "Black Rose Dragon" (

1/0/0) in Attack Position and make its Level the same as the Level of "Black Rose Dragon" (Siphon Token:

7 → 1). Akiza then sends the top card of her Deck ("Dark Verger") to the Graveyard in order to Special Summon "Glow-Up Bulb" (

Andre activates the effect of "Speed World 2" to remove four Speed Counters (Andre's SPC: 12 → 8) and inflict 800 damage to Akiza for each Speed Spell in his hand. Andre reveals "Speed Spell - End of the Storm", but Akiza activates her face-down "Wicked Rebirth" to pay 800 Life Points (Akiza 800 → 0) and revive "Stardust Dragon" (

8/2500/2000) in Attack Position with its effects negated. (In the real game, a player cannot pay a cost equal to or more than their Life Points, therefore Akiza would not be able to activate "Wicked Rebirth". However, since Yusei was next in line to duel, with his own set of 4000 Life Points, Akiza was able to pay all of her remaining Life Points, since the team overall would not lose all its Life Points.)

Due to the ruling of the WRGP, it goes immediately to Andre's End Phase. The effect of "Speed Spell - Speed Energy" expires ("Thunder Unicorn": 4600 → 2200/1800). Akiza then passes the baton to Yusei who proceeds in Dueling Andre with all the cards that Akiza had on her field.