"Trash Talk", known as "Memories of an Old Person, The Scrap-Iron Family Deck" in the Japanese version, is the sixty-eighth episode of Yu-Gi-Oh! 5D's. It first aired in Japan on July 22, 2009.

After visiting an old area of Satellite, Yusei, Jack and Crow meet up with Martha and Blister. There they hear the story of an old man stuck in his ways and hiding, Mr. Bashford.

Yusei and the others go to meet Bashford. After running into an actual version of Scrap-Iron Scarecrow and then jumping over 1 hole only to fall into another hole, Crow challenges and faces Bashford.

Turn 4: Crow
Crow draws "Black-Winged Strafe" and subsequently activates it to destroy "Maternal Junk" by sending "Blackwing - Shura the Blue Flame" from his hand to the Graveyard, but Bashford activates his face-down "Scrap-Iron Barricade" to prevent "Maternal Junk" from being destroyed by Crow's card effects this turn. After that resolves, "Scrap-Iron Barricade resets itself.

2/1300/0) in Attack Position. Crow then activates the effect of "Blizzard the Far North" to Special Summon "Blackwing - Shura the Blue Flame" (

Crow then activates his face-down "Black Thunder" to inflict 400 damage to Bashford for every card on his side of the field. Bashford currently controls seven cards (Bashford 2600 → 0). 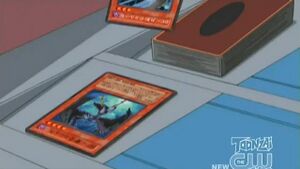 The Japanese cards are seen in the dub. 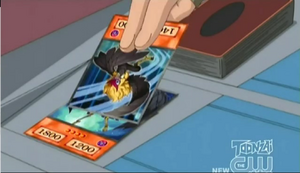 "Blackwing Shura the Blue Flame" upside down after a glitch. 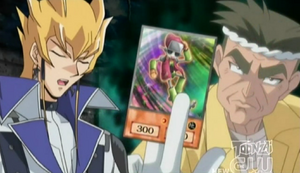 Cards in italics made their debut in this episode.