"Acceleration", known as "Aki Izayoi, Acceleration!" in the Japanese version, is the seventy-fifth episode of Yu-Gi-Oh! 5D's. It first aired in Japan on September 9, 2009 and in the United States on October 23, 2010.

Fascinated by her friends' Turbo Duels, Akiza decides to apply for her own license.

Yusei Fudo, Jack and Crow have just finished fixing up the engine of a Duel Runner. Just then Akiza appears before them in a leather outfit. Though she tells them of her uncertainty, Yusei reassures her the opposite. A flashback is shown in which Akiza tells him that she wants to know and feel the world of Turbo Dueling that Yusei experiences. With that, she has resolved to get her own license. 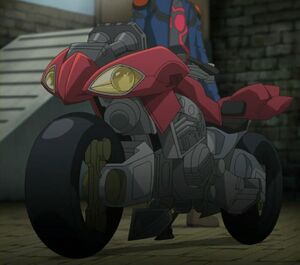 Yusei tells Akiza that her Duel Runner was assembled from parts obtained from a junkyard, assuring her that it should be enough for the test. Akiza is grateful for the Duel Runner, and is now more determined to get her Turbo Dueling license.

At the Duel Academy, after class, while cleaning her helmet, Leo and Luna approach her, asking if she also has plans on entering the WRGP. She denies it, claiming the sole purpose of this is to experience what Yusei and the others feel when they are Turbo Dueling. They are unexpectedly approached by three other candidates for the test, trying to convince her to give up in a most mocking manner. This, however, does not deter Akiza's resolve a bit, the only thing resulting from this is a rebuke from Luna towards the three.

Later, the Head instructor calls them to start the lesson on how to ride a Duel Runner. The lesson commences with all the students trying to pass a corner at an accelerated speed, some failing to do so, including Akiza. However, she spends the afternoon practicing, and despite some initial difficulties with her riding skills, her self-motivation and determination to continue, as well as Yusei's tutelage, help her to pass the first exam. 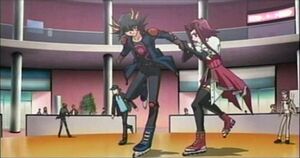 Yusei teaching Akiza how to skate

After this, Yusei decides to teach her how to ride backwards. However, while trying to do so, Akiza ends up crashing again. In order to help her with this, he takes her to a skating ring to learn how to balance better. During this, Leo says It's a date, but Luna doesn't think so. Akiza tries to skate, resulting in her stumbling, making him understand that this is the first time she skates. Despite this minor setback, she eventually learns not only how to skate, but she does it quite proficiently. At this point, Luna agrees with Leo that it seems to be a date after all.

The next day, Yusei, with the help of Jack and Crow, have remodeled her Duel Runner for her qualification duel. Akiza, who is happy because of the effort they've put for her, reassures them that she will obtain her license. Finally, everyone gathers at the Duel Academy’s riding field, where the final exam will be held over, this includes the 3 previous students who despise Akiza for having succeeded over them. As they watch some other guy crashing before the Duel even commences, they managed to identify to their surprise the guy who is in charge of the exam, Trudge.

Trudge tells Akiza that because of the Grand Prix, the amount of people requesting for a license has increased way up. And so, in order for her to pass the exam and obtain one, she must defeat him. As her friends are concerned about how she will fare in the Duel, Trudge says that he won’t go easy on her, to which Akiza replies that she doesn’t want him to. And so, the Turbo Duel officially commences between the two of them.

As the duel begins, in addition to being new to Speed Spells and to Turbo dueling overall, Akiza has a harsh time as Trudge is purposely playing rough on her, in order to teach her how to handle herself in an actual Turbo Duel. At first Trudge takes the lead, destroying Akiza's ace monster, "Black Rose Dragon", and inflicting serious damage to her Life points. At the end of Duel though, Akiza makes an offensive comeback with a combination of her "Splendid Rose" and "Blossom Bombardment".

As Trudge is on the verge of losing, the 3 individuals in the stands have plotted to harm her by detonating a frame holding large pipes. The pipes come crashing down after Trudge has passed them. While Yusei is concerned by this turn of events, Trudge simply warns her that if she stops, the exam will be over. After a brief moment of shock and worry, she then remembers Sherry and the reason why she's doing all of this. Reacting instantly, she uses the skills she learned from Yusei and successfully avoids all the pipes. As she catches up with Trudge, he becomes surprised as well.

The Duel ends with Akiza defeating Trudge, and as they both stop, he congratulates her on passing the exam. As Yusei and the others are glad to hear the result, Jack, who overheard the three about their involvement with the pipes in order to harm Akiza, decided to teach them a lesson with his own hands-literally. Even Sherry, who was watching her display of skills from afar, is intrigued by the outcome. 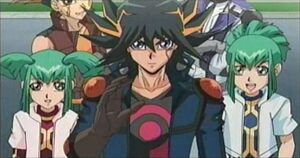 With Akiza having officially earned her license, Yusei offers his hand as a sign of congratulation, to which she reciprocates with her own, and welcomes her to the world of Turbo Dueling.

4/1300/1300) in Defense Position. Akiza then tries to activate "Speed Spell - Summon Speeder", but because she doesn't have enough Speed Counters, her Duel Runner won't allow it.

3/1000/1000) in Attack Position. Akiza then activates the effect of "Twilight Rose Knight" in order to Special Summon "Lord Poison" (

Trudge then activates his face-down "Climactic Barricade" since Akiza Normal Summoned a monster. Now all monsters that are Level 4 or below can't attack this turn and Akiza will take 500 damage for every Level 4 or below monster she controls during her End Phase. Akiza then activates "Speed Spell - Summon Speeder" to Special Summon "Dark Verger" (

2/0/1000) in Attack Position. She then tunes "Dark Verger" with "Witch of the Black Rose" in order to Synchro Summon "Splendid Rose" (

At the end of the credits, it was shown that "Splendid Rose" was chosen to become a card in the anime as a result of a drawing competition.

The following cards appeared in this episode. Card in italics debuted here.