Diablo was the collective name for the Duelbot army built by Primo. It also means devil in other languages.

Unleashed towards the end of the preliminary rounds of the World Racing Grand Prix, this army was an attempt by Primo to complete the Grand Design through brute force. The plan was to switch the Duel Lanes to Battle Royal mode and force Turbo Duelists to fight multiple Duelbots at the same time. Although Jakob opposed the plan, he let it proceed. In the end, Yusei Fudo, Jack Atlas, Bruno, Kaz, and likely several other Turbo Duelists were able to overtake the Diablo and begin to take back the Duel lanes. Sensing this, Primo sent all of the Diablo to take out Yusei Fudo, Sherry LeBlanc and Elsworth. They almost succeeded but were destroyed by Bruno in the guise of Vizor. Then, as Bruno began to Accel Synchro Summon in his Duel with Primo, a small pod of Diablo were able to distract him before he could Summon his ace monster. As Yusei began to Duel Primo, Bruno, Jack and Kaz managed to hunt down and finish off as many of the Diablo as they could. It is unknown if any remain, but it was shown that Sector Security were picking up the Duelbots up after they were defeated in order to reprogram them to do what they were originally built for. 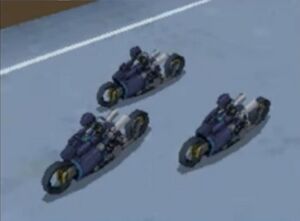 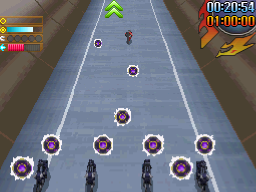 In Over the Nexus, the Diablo appear once more to terrorize the player along with other Turbo Duelists. The player must escape the Diablo by dodging various "Ally Salvos" that they throw at the player for one minute. If the player is successful, they can escape without taking any damage.

All of the robots used "Ally of Justice" Decks to swarm the field and destroy opposing cards, assisted by Trap Cards such as "DNA Transplant" and "Solemn Judgment". Furthermore, the Diablo traveled in packs, outnumbering opponents by at least four to one and sharing cards with each other to defeat all their opponents almost immediately. The primary card that showed up in their Duels though was "Ally Salvo".