The Cursed Needles are equipment used by the monkey army controlled by Zeman.

This equipment is used to trap and control creatures from Minus, and is also responsible for the "Minus Curse". In the English version, the staves armed with this needle were called Minus Staves. 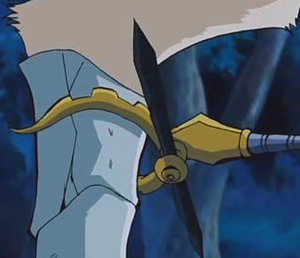 While the needle is turned to look like a Minus sign, backwards effects occur near the Cursed Needle, such as reversing a being's personality (If on someone while it is minus, one hears the opposite of what a person says or says things opposite), and causing things to roll uphill or bounce upstairs. When it is turned to look like a Plus sign, the monkey soldiers can capture spirits in stone tablets.

While it appears as a Plus sign, it reverses all that is caused while in Minus mode.

If two Cursed Needles in Minus mode touch each other, they will cancel each other out, changing into Plus mode, then explode.

"Zeman the Ape King" and "Magician Ape" also use this equipment.