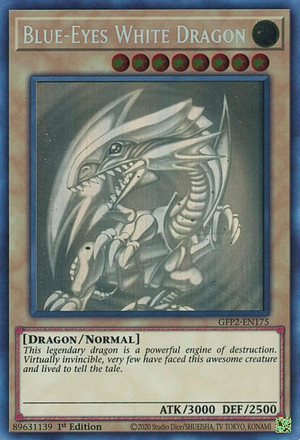 "Blue-Eyes White Dragon", with its password, 89631139, visible in the lower-left corner of the card.

A password is the eight-digit number printed in the bottom-left corner on most OCG/TCG cards (certain cards, such as "Gate Guardian", do not have a password, and some cards instead have limitation text in this spot). The password for a card is always the same in all languages and all prints of that card, including alternate artwork versions, except for "Dark Magician" and "Polymerization" ("Dark Magician" has an Arkana version, and "Polymerization" has an alternate password version, both with different passwords from their main versions). Because of this consistency, passwords can be useful for identifying cards.

Passwords, while serving no real purpose in the OCG/TCG, are used in some video games. By entering a card's password (usually in a "Password" screen), the player may obtain that card for their virtual collection. This usually has various restrictions. In most games, this can only be done once per card. In some games the player will be given the card for free, while in others the player must also pay in-game currency. In later games, players must already have the card in their card list, either by owning at least one copy of it, or by owning most of the other cards in the set the desired card is from.

Yu-Gi-Oh! Duel Monsters and Yu-Gi-Oh! The Duelists of the Roses use their own passwords for cards. Duel Monsters has nine passwords, spelled with kana and used to unlock nine of the 15 secret monsters; each password is the name of a staff member who worked on the game or on the manga at Shueisha at the time. In The Duelists of the Roses, the passwords are mostly alphanumeric, and all of the game's 854 cards have a password, though 120 of them are unusable.

Several video games use passwords for things other than unlocking cards; for example, Yu-Gi-Oh! Dark Duel Stories has passwords that unlock Stage 5 characters, a password that makes Grandpa give the player an extra card after every Duel, and a password to immediately view the credits. Dark Duel Stories also has 106 unusable card passwords which produce a custom error message when entered; several of these passwords have never been associated with cards in the OCG/TCG or in other video games.

Passwords are not featured in the anime or the manga, or in other real-life games such as Yu-Gi-Oh! Rush Duel, Yu-Gi-Oh! Bandai's Official Card Game, Yu-Gi-Oh! Dungeon Dice Monsters, or collector's cards.

Cards printed without a password[edit] 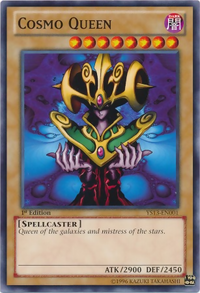 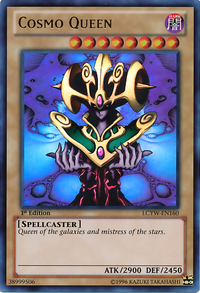 "Cosmo Queen", an example of a card printed both without (left) and with (right) a password.

A number of cards have been printed in the OCG and TCG without a password. Many of these cards had passwords in various video games, and have often been reprinted with their passwords later on.

These passwords are used in video games to perform some action other than unlocking cards.

These nine passwords are the only ones in Yu-Gi-Oh! Duel Monsters, and use kana instead of numbers or letters. Each password is the name of a staff member who worked on the game, or who worked on the manga series at Shueisha at the time. This was probably done because Duel Monsters was released before the first OCG set, Vol.1, though it is not known why so few of the cards in the game have passwords, especially since the game credited at least nine individuals, but only six of them had passwords, and since the game includes 15 secret monsters, but only nine of them can be unlocked with a password.

Yu-Gi-Oh! Dark Duel Stories includes 102 unusable passwords which, when used, return the error message "Can't Record Password! Try a different password." There are also four passwords that appear in the game's data twice, for the cards "Wall of Illusion", Neo the Magic Swor", "Man-eating Treasur", and "Sorcerer of the Do". These four cards, and nine others with unusable passwords, were featured in the next Duel Monsters video game, Yu-Gi-Oh! Duel Monsters 4: Battle of Great Duelist.

22 cards with unusable passwords were not released in the OCG/TCG until after the release of Dark Duel Stories (which was first released in Japan on July 13, 2000); four of the cards ("Mimicat", 2015; "Roulette Spider", 2015; "Dark Renewal", 2014; and "Anti-Magic Arrows", 2015) were first released over a decade later, and one card ("Beckon to Darkness") has never been released in the OCG/TCG. All cards which had been printed in the OCG before the release of Dark Duel Stories (all printed cards up to Magic Ruler) were featured in the game, either as playable cards or as unusable passwords.

Nine of the unusable passwords have never been used for cards in the OCG/TCG or in other video games; these passwords have blank rows (other than the password itself) in the below table. The passwords are listed here in the same order in which they appear in the Dark Duel Stories ROM, though the table can be resorted by clicking on the desired column's header.

Yu-Gi-Oh! Duel Monsters 6: Expert 2 has 1115 cards, but due to a bug in the password checking routine, only the first 1086 passwords are usable. As a result, 17 passwords cannot be used, even though they are present in the game's ROM. (There are actually 29 unusable password slots, but 12 of them correspond to cards without a usable password anyways; that is, their password in the ROM is set to FFFFFFFF.)

The "I#" column in the following table stands for "internal number".

Entering a card's password allows it to be purchased for a certain number of Star Chips; the same card can only be purchased once.

The Japanese version of the game allowed certain cards to be acquired via lottery, in which a special password was entered into the player's PocketStation. The PocketStation's internal ID would be used to generate a five-digit number, and if the ending digits of this generated number were correct for the entered password, a card would be awarded. This meant that most cards would not be awarded on a given device; in the extreme cases (requiring all five digits of the generated number to be correct), only one in 100,000 devices would "win" the lottery.

While they were not used for any cards in Forbidden Memories, passwords for certain cards would be shown in its credits; these passwords were instead for Yu-Gi-Oh! The Duelists of the Roses, the sequel to Forbidden Memories. The potentially shown passwords are for "Exodia the Forbidden One", "Goblin Fan", "Meteor Dragon", "Mirror Wall", and "Slate Warrior".

Yu-Gi-Oh! The Duelists of the Roses used eight-character alphanumeric passwords that have never been reused elsewhere. All 854 cards in the game have a password, but 120 of them are unusable, listed below. Usable passwords are listed on the list of cards.

Unusable The Duelists of the Roses passwords[edit]

All 854 cards included in Yu-Gi-Oh! The Duelists of the Roses have an 8-character alphanumeric password in the ROM. 120 of these passwords are marked as unusable, listed in the following table.

Each password used costs a certain amount of DP, with the price depending on the card.

Ultimate Masters: World Championship Tournament 2006 has a second unrelated password system used for unlocking additional banlists. Because Konami could not effectively predict future banlists, this system allows the banlist's complete contents and name to be encoded.

Yu-Gi-Oh! ZEXAL World Duel Carnival features a Present Code system for unlocking otherwise-unavailable items and Deck Recipes. Each code consists of a name or word/phrase written in kana, followed by a string of digits. The codes were revealed on the game's official website and in some promotional materials.