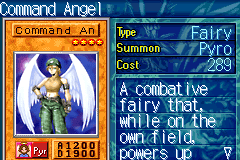 Fire, known as Flame (, Honō) in the Japanese version and Pyro in multiple North American video games,[note 1] is an Alignment.

It appears in the games Duel Monsters II: Dark duel Stories, Dark Duel Stories, Duel Monsters 4: Battle of Great Duelist, The Sacred Cards, and Reshef of Destruction and is briefly featured in the manga. In the OCG and TCG, FIRE and Pyro are Attribute and Type versions of this Alignment respectively.