From Yugipedia
Jump to: navigation, search
This article is about the Type. For the card part, see "Plant" (card part).

Plant ( Shokubutsu) is a Type of monster.

Plants also have Plant version of staple cards like "Solemn Judgment" and "Mirror Force", in the forms of "Pollinosis" and "Wall of Thorns", respectively. Plants have non-Plant support versions of "Marauding Captain" in form of "Twilight Rose Knight", a version of "Witch of the Black Forest" in form of "Violet Witch". Other Plant cards are very similar to certain non-Plant cards, for example: "Dark Verger" and "Quillbolt Hedgehog". Other cards present similarities in the card images like "Wonder Clover" and "Break! Draw!".

The usual Attributes associated with Plants are EARTH or WATER. Plant cards usually revolve around swarming and regenerating back onto the field. Unlike Zombies, Plants are often used to fuel effects such as negations rather than for strictly attacking purposes. They have many cards that allow them to be Special Summoned from the Deck and hand but mostly from the Graveyard. Cards like "Lonefire Blossom", "Plant Food Chain", "Lord Poison", "Gigaplant", "The World Tree" and "Miracle Fertilizer" all add major support to bringing back a swarm of Plant monsters to overwhelm the opponent. There are many good Plant Tuner monsters, like "Copy Plant" and "Spore". 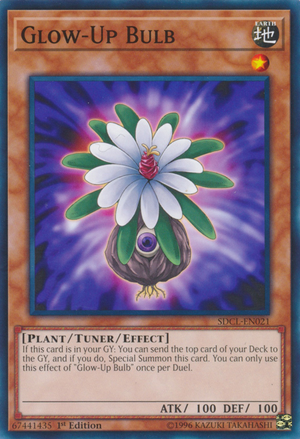