Cyberse (サイバース Saibāsu) is a Type of monster. This Type is used by Yusaku Fujiki, Varis, Bohman, BitBoot, Theodore Hamilton, Earth, Windy, Lightning, Harlin, Skye Zaizen, Ai, and Pandor in Yu-Gi-Oh! VRAINS, Yami Kuroda in Yu-Gi-Oh! OCG Structures, and Nail Saionji in Yu-Gi-Oh! SEVENS. Appearance-wise, they resemble creatures and humanoids strongly connected to elements of digital technology and cyberspace. At times though, they tend to resemble either Insect, Machine or Psychic monsters (the humanoids bearing design elements from the TRON franchise). The name is a portmanteau of "Cyber" (サイバー Saibā) and "Universe" (ユニバース Yunibāsu).

Their general theme revolves around swarming the field with weak monsters to easily Link Summon powerful Link Monsters, and they also have lots of monsters that gain effects when banished in a similar vein to Psychic monsters.

In Yu-Gi-Oh! Rush Duel, Cyberse monsters' main strategy is to draw cards repeatedly in order to add a Maximum Monster and its parts to the hand as fast as possible and set up for a Maximum Summon; the first Maximum Monster revealed and that appeared in the Yu-Gi-Oh! SEVENS anime, "Yggdrago the Heavenly Emperor Dragon Tree", is Cyberse-Type.

OCG/TCG archetypes and series mostly or entirely composed of Cyberse monsters include: 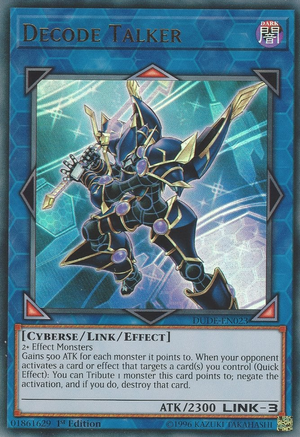