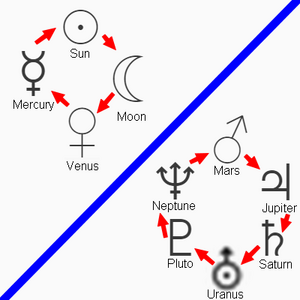 A chart showing the relationship between the Guardian Stars. Moving clockwise around each group, each Star is strong against the next Star and weak against the previous one.

Guardian Star (守護星 Shugo Hoshi), known as Cosmic Alignment in the manual, is a Monster Card property in Yu-Gi-Oh! Forbidden Memories, based on the Alignments featured in Yu-Gi-Oh! Duel Monsters II: Dark duel Stories. Each monster has a choice of two Guardian Stars, which dictate the element it uses in its battles. Each Guardian Star is named after a celestial body; the sun, the moon or one of the eight extraterrestrial planets in the Solar System, following the classification prior to the 2006 revised definition. Each Guardian Star is strong against one other Star and weak against another one. If a monster battles a monster of a weaker Star, it gains 500 ATK and DEF.

When a player Summons a monster, they choose one of its two Guardian Stars. The CPU opponent always chooses the first of the two. When a battle is viewed in 3-D, the monsters use different attacks depending on their Guardian Star.

The Guardian Stars are as follows: