"TRANSCEND GAME (part 1)" (〈〉Toransendo Gēmu ❬zenpen❭) is the first part of a special two-part story of the Yu-Gi-Oh! manga, TRANSCEND GAME. It was released in the Weekly Shōnen Jump magazine on April 11, 2016 in Japan and on December 19, 2016 in the United States.

"TRANSCEND GAME" was authored by Kazuki Takahashi and is related to the Yu-Gi-Oh! The Dark Side of Dimensions movie, serving as a link between the end of the manga series and the film. 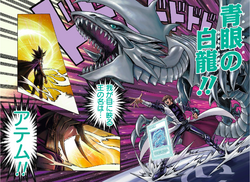 While standing on a KaibaCorp flying machine, Seto Kaiba looks onward and states that if that is the infinite darkness over there, the Dragon of Light will illuminate it, as he Summons a "Blue-Eyes White Dragon", by placing its card on his Duel Disk. In his eye he sees the king, Atem.

Events leading up to this began six months earlier. KaibaCorp had made progress on a particular project. At their headquarters, Kaiba is notified that it is time for his visit to the research and development department. As he puts on his coat, Kaiba thinks of "Operation Neurons", the development code for the company's new Duel Disk. He reflects on how they had tried numerous test versions, only a few of which were safe enough to be considered their new product.

On his way, Kaiba walks past glass casings containing the Duel Disk prototype and KC mass production Disk. Inside a third encasing, is a test version of the Neurons VR system, which he deems to be scrap, but a failure loaded with unlocked potential.

At the Duel Disk research and development department, Kaiba meets with Mokuba Kaiba, Chief Kuwabara and a number of researchers. Kuwabara informs him that to collect data for the test versions, they accepted applications for test monitors and received over a million candidates. Out of them, they gathered around 200 thousand Duelists under the age of fifteen, irrespective of race and faith, with network data in every branch of the country providing them with data around the clock. Mokuba adds that it is amazing to have Duelists all over the country craving to see the world Kaiba has created and offering their help free of charge. Kaiba requests that they pay close medical attention to the test subjects. 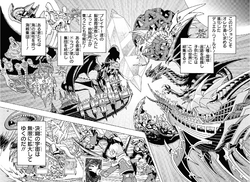 The group pass through a door into a bridge over a room, where the test subjects are sitting on the floor wearing the Neurons headgear. Kaiba explains that the electromagnetic coils of the Neurons gear detect brainwave activity, which it converts to electromagnetic signals. The image from the user's imagination is then linked to the Crystal Cloud Network to complete the VR Solid Vision. Mokuba further comments that with Neurons systems interacting with each other around the world, people who have never seen each other are Dueling in VR space, in the world Kaiba created; the world of Duel Links. He explains how Duelists can create Decks from card data sent across the cloud server and that they can even group together based on their brainwave frequency—their Duel pulse. People can form guilds, such as dragon users or pirates.

Using a much smaller headpiece, Kaiba is able to see what is happening in the Duel Links. He explains that the ATK of monsters Summoned from the Crystal Cloud Server is determined from the users' brainwaves and that the power of their consciousness is the key to making monsters stronger. He reckons that the hardest thing to modify in any game is maintaining order, but it could also be said that the destruction of order is the way of the world. 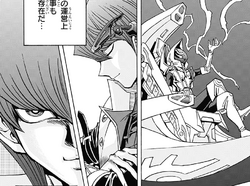 Kaiba admires Prana's dangerous element, but is also cautious of it.

A woman in the Duel Links challenges the Dragon Knight Airborne Brigade to a Duel. The guild laughs at the idea of one person challenging their guild alone. However she Summons "Duza the Meteor Cubic Vessel", with an ATK of 8800 Pulse. Kaiba comments that this person must have a brainwave frequency that transcends that of a normal person and that they will destroy everything. "Duza the Meteor Cubic Vessel" attacks and destroys "Stone Head Dragon". The woman remarks that the Dragon Knight Airborne Brigade are not all they were made out to be, before flying away. 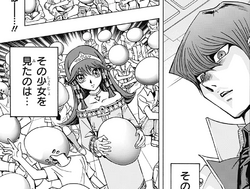 A girl who has removed her Neurons gear catches Kaiba's attention.

Kaiba finds the appearance of such a dangerous element captivating, but from a business perspective, he cannot let it go unchecked and notes that the Duelist called herself Prana.

Kuwabara is impressed with the quality of the Solid Vision and Mokuba comments that the new Duel Disk's trial version is a success. However, Kaiba regards the system as being at only 50%. With there being some unexpected distortions in the VR, he requests a report of the brainwave data from a portion of the subjects to be sent to him by the end of the day.

Kaiba looks down from the bridge, in surprise, at a girl, who has removed her Neurons gear. Present-day Kaiba thinks "That was when... I saw that young girl...".