With Shadi holding Anzu in danger, Dark Yugi is forced to face Shadi in the first stage of his Shadow Game. 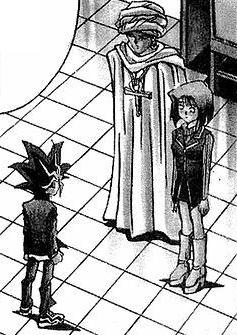 With Anzu as his hostage, Shadi has just baited Dark Yugi into taking control of regular Yugi's body. He tells Yugi that he needed to see him again and now that he's here, the time has come to finish their battle in a Shadow Game. Shadi recollects on how last time they met, Shadi searched Yugi's soul room, Yugi forced him out, but this time he shall test Yugi's powers in the real world. With Shadi in command, Yugi sees no option, but to accept his challenge. Shadi tells Yugi to meet him on the roof in 10 minutes, at 8 o' clock, where they will begin their game. In the meantime, Shadi will prepare the game. Fortunately for him, all the tools he needs for the game are in the archeology lab.

With 1 minute to go before the game, Yugi ponders on why Shadi is so determined to test his power. He wonders if Shadi's bloodline or whatever group he's with want to use his power or eliminate it. Even Yugi doesn't know the full extent of the Millennium Puzzle's power, but hidden inside the true room of his soul, the Puzzle's unknown powers pulses quietly waiting for the right time. The only thing Yugi's sure of is that Shadi is his enemy. No matter what game Shadi makes him play, he must win for Anzu's sake. The clock then strikes 8. 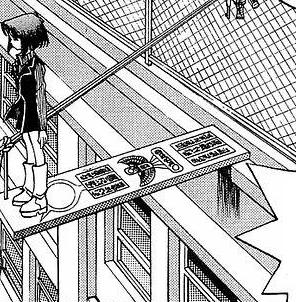 Anzu on the board over the edge of the building.

On the roof, Yugi finds Anzu, still motionlessly possessed by Shadi, standing on a board sticking over the edge of the roof past the safety fence. The board is tied to a series of four ropes, running past Anzu's hand, through the Millennium Key and tied to four ushebti at the opposite side of the fence. The Key is held back from sliding along the ropes by another rope tied to a larger ushebti. Shadi says that they shall begin the game, “The Trial of the Mind”. 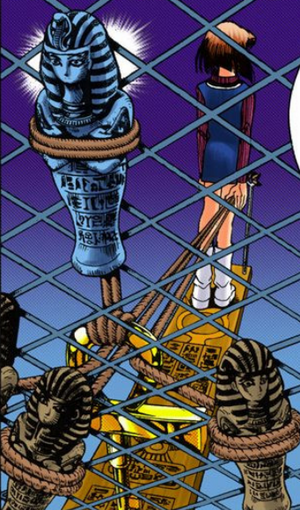 The ushebti supporting Anzu and the Millennium Key.

Yugi goes over to fence to see Anzu. He yells at Shadi for putting Anzu in danger and insists that he does not use her in their game. Shadi replies that he is and Yugi losing the game, will cost her life. Before he explains the rules, Shadi says that he has something he'd like to say about the Millennium Puzzle; he doesn't how Yugi came into possession of it, yet alone how he completed the puzzle, which nobody has been able to solve for 3000 years. Yugi thinks it's a coincidence, Shadi believes, but tells him that he is wrong; the puzzle chose him after waiting over 3000 years. Shadi claims his bloodline has been similarly chosen to wield the power of Millennium Items. Yugi has heard enough. He tells Shadi not to dare call them some sort of allies and demands that he get on with the game.

Shadi tells Yugi not to be afraid. Yugi is surprised to have been called afraid. Shadi continues that somewhere in Yugi's heart, he is afraid of the unknown powers of the Millennium Puzzle. That is the weakness of Yugi's heart, he says and invites him to look in front of himself for proof. Yugi notices one of the ushebti has begun to crack and sees it break apart before his eyes. This releases one of the ropes, supporting Anzu's board. Yugi starts to sweat and wonders how the statue could have broken by itself.

Shadi asks if Yugi has noticed the game has already started. He explains that the ropes tied to the ushebti are supporting Anzu's board. The ushebti reflect Yugi's heart and every time he shows weakness in his heart, one will break releasing one of Anzu's support ropes. Once the four ushebti are gone, Anzu will fall. However this is a game, so Shadi explains how Yugi can win. The ushebti supporting the Millennium Key, reflects Shadi's heart. Should it be broken, the key will slide along the ropes supporting the board and touch Anzu's hand. Once a person, whose soul room has been redecorated touches the Key, they are returned to normal. If the Key touches Anzu's hand, she will be saved and Shadi will lose. In effect, the person whose heart shows weakness loses the game. 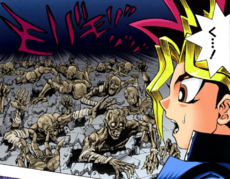 Stage 1 of the game.

Shadi gets ready for them to begin. Yugi wonders what tricks Shadi will use to test his heart. Shadi laughs and announces the start of Stage 1. The tiles around Yugi start to crack, as hands break their way through the floor. They grab Yugi by the feet and in a few seconds, the bodies of these mummies make their way through the floor. They all start grabbing onto Yugi.

Shadi declares that is the first stage of Yugi's heart's weighing and asks him the riddle, “What creeps on the ground and clings to pillars?”. If Yugi can answer this, he'll know what surrounds him. Surrounded by the mummies, Yugi worries, but tries to stay focused. The face on one of his ushebti starts to crack.

Shadi watches Yugi squirm with nothing really physically disturbing him. He informs Yugi that he is trapped in an illusion. He will drown in the illusion and lose another ushebti, should he show weakness in his heart. The only way for Yugi to defeat the illusion is to answer Shadi's riddle.

Feeling the zombie's hands touching his face, Yugi tries to think of the answer to the riddle. Frustrated he wonders why he can't break the illusion, when he knows it's not real. He tries to relax and thinks about the question. “That which creeps on the ground” is the mummies, he thinks, and the “pillar” that they cling to is him. He tries to think of it the other way around. He imagines a pillar standing and wonders what would be coming off it clinging to the ground. The answer hits Yugi, the illusion's true nature is his shadow, he announces. The mummies disappear, as he does so, leaving him standing face-to-face with Shadi. 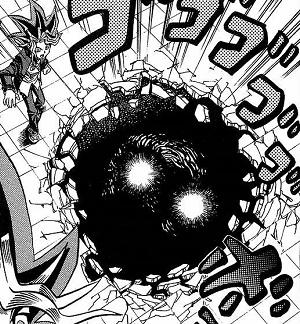 Stage 2 of the game.

Shadi smirks that Yugi was somehow able to clear the first stage, but says he was just trying him out. The next stage is even harder, he claims and asks if Yugi can keep his heart strong. The floor in front of Yugi starts to crack up, he steps back as a huge hole takes form. Inside the hole is a pair of large glowing eyes.

Jonouchi chased by the professor.

Elsewhere, Jonouchi is still running the professor, possessed by Shadi.