"The Path of Darkness!" (の！！ Kurayami no Michi!!) is the 137th chapter of the Yu-Gi-Oh! manga. In its first English printing, it was numbered as the 78th chapter of Yu-Gi-Oh! Duelist. In the 3-in-1 edition, its number was changed to match the original Japanese printing.

Yugi is forced to face Ryuji in a D.D.M. match. However, Ryuji holds an overwhelming advantage being the creator of the game, and immediately takes the lead against Yugi, who cannot count on his other self, without his Millennium Puzzle.

The narrator explains D.D.M - Dungeon Dice Monsters; each player starts with a Pool of twelve dice, and they roll three dice on every turn. Ryuji tells Yugi to play, and he rolls his dice as the narrator explains that depending on what Crests the player rolls, they can summon a monster or activate special powers. He rolls two star-shaped Summon Crests and a sword-shaped crest, and declares that since he got two Summon Crests, he can Summon a creature. He sets the die on the field, and tells the creature to come out, declaring "Dimension Dice!" Yugi is shocked to see a creature appear from the die; the Level 2 "Wizard Dragon", with 300 ATK and 200 DEF, and the special ability to use a Magic Crest to move any creature two spaces in the dungeon. Yugi realizes that the dice all have creatures inside them, and they fold open to create corridors in the dungeon. Ryuji asks if Yugi gets it now; in D.D.M, players use their dice to build a dungeon, and then invade that dungeon with their monsters to attack the enemy Dungeon Master. The player loses if their Dungeon Master is attacked three times, and Yugi notes that every time you summon a creature, you also expand the dungeon, so every die you play affects the game in more ways than one. 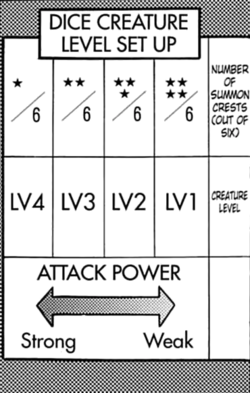 Ryuji tells Yugi that it's his turn, and to roll his three dice. Yugi determinedly thinks that they still have his Millennium Puzzle, so he can't rely on his other self. He tells Ryuji that he has to promise to return the Millennium Puzzle if Yugi wins, and Ryuji agrees, but laughs to himself, thinking that there's no way Yugi can win this game. Yugi clenches his dice, thinking that he can win by himself, and he rolls his dice. He rolls an arrow, a six-pointed star, and a symbol of crossed swords. Yugi gasps that the Crests are all different, and Ryuji tells him that it's too bad that the summon failed. He explains that the dice that Yugi chose are high-Level, meaning that they're difficult to summon. Yugi is surprised at the mention of Levels, and Ryuji explains that there are six different Crests that can be seen on the dice; (a table next to him shows the six types of Crests; Summon, Movement, Magic, Attack, Defense and Trap). Then there's Levels; for example, his "Wizard Dragon" is Level 2. Levels are a measure of power, but what do they have to do with the Crests? It's determined by the number of Summon Crests on the creature dice; on "Wizard Dragon's" dice, there are three Summon Crests, so in other words the chances of summoning him are one in two. "Wizard Dragon" is easy to summon, but in return its Level is low. He tells Yugi to take a look at his dice, and Yugi realizes in shock that they all only have one Summon Crest. So if there's less Summon Crests, there's less of a chance of summoning a monster, and thus a player takes a greater risk to summon a tougher monster. The outcome of this game will be decided by the number of creatures that they can summon, but if Yugi chooses only high-Level dice, he'll have no chance of winning unless he's got great luck. As a table depicts the correlation between Level and Crest number, Yugi laments that he didn't realize the rules when he chose his dice, and their Levels are all too high.

Ryuji states that since Yugi failed to summon, he can't play any dice on the board, so that means it's Ryuji's turn. First he draws a new die so that he has three in his hand. He rolls his dice again, rolling two Summon Crests and an arrow; a Movement Crest. Ryuji celebrates rolling two Summon Crests again, declaring that he can summon a creature. He declares "Dimension Dice", and the path unfolds connected to the path of "Wizard Dragon", revealing a serpentine dragon. Yugi notes that the dungeons are connected and a passage is heading towards his side of the board. Ryuji explains that the dice must be set so that they link up, and since he also rolled a Movement Crest, he will move one of his creatures one space. His new creature crawls forwards a space on its dungeon path. Yugi rolls again, but only rolls 1 Summon crest in addition to a Movement and Attack Crest, and he laments his failure. Ryuji warns Yugi that if he doesn't summon a creature soon, Ryuji's creatures will walk all over him. Yugi gulps, thinking that he'll lose if this keeps up. Ryuji thinks to himself that he knew it; without the Millennium Puzzle Yugi is just a normal kid.

Clown masks line the walls of the room, and Mr. Clown watches from one of them, laughing and thinking that that's it, telling Ryuji to let Yugi know that the grandson of Sugoroku is no match for him. It's all just a part of his revenge. A security guard tells Mr. Clown that Yugi's friends are looking for him, and Mr. Clown snorts, ordering him to tell them something and get rid of them. He smirks, thinking that soon their long struggle over the Millennium Puzzle will be resolved at last.

The guard does as he's told, claiming that he hasn't seen Yugi. Jonouchi snaps that he's lying; he knows Yugi came here to buy a game. Anzu adds that Yugi never came out and vanished inside the store. The guard states that as they can see they're very crowded, so their friend probably got tired of waiting in line, gave up on the game and went home. Jonouchi snaps that Yugi would go without food for a day before giving up on a game, but Sugoroku tells him that there's nothing that they can do, and he suggests that they just wait at his house for Yugi to show up. After all, Yugi's in high school, so he's too old to get lost. Jonouchi thinks it's fishy that Yugi would leave without telling them, but Anzu just suggests that they take Mr. Mutou's offer up. Bakura looks back at the Black Clown, thinking that he had a bad feeling about this.

Back at the game, Ryuji has summoned another creature, and he asks Yugi what's wrong; pretty soon his creatures will reach Yugi's Dungeon Master. Yugi thinks that he'll lose if he can't summon a creature soon, and he declares his turn, begging for a pair of Summon Crests, but he doesn't roll any, getting a Magic Crest and three Movement Crests. He thinks in frustration that the dice won't pair up no matter how many times he rolls. Ryuji snickers, asking if this is the extent of Yugi's gaming skills that he's heard so much about. Now Ryuji knows the truth; without the Millennium Puzzle, Yugi is worse than some kid on the street. He warns Yugi not to collapse into despair yet, because Ryuji intends to utterly crush him. He rolls his dice, getting two more Summon Crests and a Trap Crest. He laughs that now he's right in Yugi's face, and declares "Dimension Dice", summoning the "Twin-Headed Griffon" one space from Yugi's Dungeon Master. Ryuji declares that this is checkmate, and Yugi thinks that if he doesn't roll a Summon Crest on his next turn, he won't be able to stop Ryuji from killing him.

Ryuji tells Yugi that it's his turn, and Yugi thinks of Dark Yugi and the Millennium Puzzle. He looks up in resolution, thinking that if he loses he can't get the Millennium Puzzle back, and he grips his dice tightly, vowing to get his other self back. Thinking that he can't lose, he rolls his dice. Ryuji thinks that it's over; Yugi's chances of summoning a creature are less than one in six. The dice land and spin - and they come up with two Summon Crests and a Magic Crest. Yugi celebrates his roll, and Ryuji watches in shock, disbelieving that Yugi could get two Crests with Level 4 dice. Yugi declares "Dimension Dice", opening his dice in between his Dunegon Master and "Twin-Headed Griffon", and Summoning the Level 4 "Little Wizard" with 500 ATK and 600 DEF. It attacks and destroys "Twin-Headed Griffon" with "Magic Lightning Rod", and Ryuji thinks that since one of Yugi's dice was a Magic Crest, he was able to use it to activate "Little Wizard's" special ability, allowing it to attack a creature two spaces away. Yugi cheers that he beat "Twin-Headed Griffon".

This is a D.D.M. match. Check the article for rules.