"The Cards with Teeth (Part 2)" is the tenth chapter of the Yu-Gi-Oh! manga. This is the first chapter to be a continuation of a previous chapter.

This was originally printed in the Weekly Shōnen Jump magazine in Japanese. Its first English release was in the Shonen Jump magazine. It has been reprinted in volume 2 of the tankōbon and volume 1 of the bunkoban.

Dark Yugi continues his Duel with Seto Kaiba to win back his grandfather's "Blue-Eyes White Dragon". 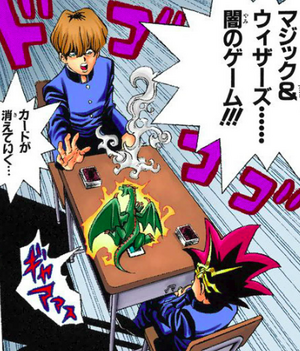 Dark Yugi and Kaiba continue their Shadow Game of Duel Monsters. Kaiba's Life Points have just dropped to 1500, from "Ryu-Kishin" being destroyed by "Blackland Fire Dragon". Dark Yugi informs Kaiba that the first player to run out of Life Points loses and as punishment they will know death through a Penalty Game. Kaiba thinks about that and laughs that this is the extreme game he has been looking for. Dark Yugi vows to win the game and get back Grandpa's card, his heart.

Kaiba starts his turn and draws the minotaur, "Battle Ox". With 1700 ATK, he says it is one of the strongest Beast-Warriors. He Summons the card and "Battle Ox" comes to life. Kaiba orders it to attack Dark Yugi's "Blackland Fire Dragon". "Blackland Fire Dragon" uses its "Flame Breath" attack, but "Battle Ox" easily counters and beheads the dragon. The difference between the two monsters' ATK is subtracted from Dark Yugi's Life Points, dropping him from 2000 to 1800.

As Dark Yugi starts his turn, the reader is shown some of the rules of Duel Monsters. Since the English manga was printed later than the Japanese, it explains that this is the first edition of Duel Monsters. The given rules explain battle positions, determining the results of battle and Spell Cards.

The ATK of "Battle Ox" is lower than the DEF of "Mystical Elf". Unable to beat the elf, Kaiba switches "Battle Ox" to Defense Mode and plays a Spell Card face-down on the field.

Dark Yugi draws "Skull Servant", which is too weak to do anything right now.

Over the next few turns, "Battle Ox" destroys "Skull Servant", an unnamed bald tattooed monster, an unnamed plant, "Half-Fish Man", "Mushroom Man" and 2 unseen cards. Dark Yugi's Life Points are now down to 500, while Kaiba's are still at 1500. Kaiba tells him to give up, there is no way he can win.

Dark Yugi gets ready to draw and thinks if this next card is not stronger than "Battle Ox", it is all over. He draws the strongest card in his Deck, "Summoned Skull". Kaiba is surprised to see Dark Yugi has the Skull Demon. In the Japanese version, Kaiba says it is one of the five strongest monsters in the game. In the English version, he says it is one of the five strongest Fiends. He asks how Dark Yugi could have such a rare card. "Summoned Skull" uses its "Demon Lightning" attack to defeat "Battle Ox". 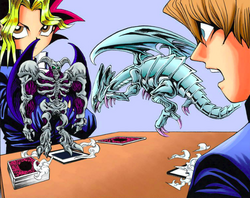 Over the next few turns "Summoned Skull" defeats every card Kaiba draws, including an unidentified black robed monster. After this, Kaiba's Life Points are dropped to 800. Kaiba starts to worry. Although his Deck does have cards that can beat "Summoned Skull", the odds of drawing one are low. However he does know one way he can win; the card is not in his Deck, but he brought it with him. In the English version, he thinks to himself that the games rules went out the window once monsters started to come to life. Both versions, he thinks if he can bring out his trump card, he will win.

Kaiba compliments Dark Yugi, saying he is pretty good, while he sneaks the "Blue-Eyes White Dragon" card from his pocket to his hand and pretends to draw it from his Deck. In the English version, the Type and lore for "Blue-Eyes White Dragon" are added to the card again. Kaiba Summons the dragon, with 3000 ATK and 2500 DEF. In the Japanese version, it says these are the max values. In the English version, it says that they are the max values in First Edition Duel Monsters. 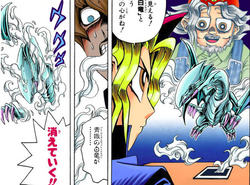 Dark Yugi is surprised and remarks that that is his grandfather's card. Kaiba denies taking Sugoroku's card again and says that this is his own "Blue-Eyes White Dragon".

The difference in ATK between "Blue-Eyes White Dragon" and "Summoned Skull" is 500, exactly enough to beat Dark Yugi. Kaiba orders "Blue-Eyes White Dragon" to attack, but the monster stays still. Dark Yugi explains that Kaiba still does not understand the true meaning of this game; the card will not attack, because Kaiba's soul is not in it. Dark Yugi says he can see the soul of his grandpa behind the "Blue-Eyes". The dragon starts to disappear and Dark Yugi tells Kaiba that it was tore between its fate to destroy and its loyalty to Grandpa's soul, so it chose to destroy itself, as the only way to fulfil its duty. Kaiba says that it is impossible; there's no way cards can think. 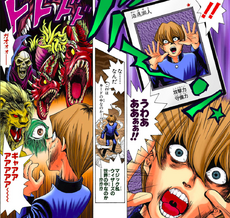 Dark Yugi starts his turn and directs their attention to a card, he had been keeping face-down. He activates the card, "Monster Reborn" and uses it to revive "Blue-Eyes White Dragon" on his side of the field. "Blue-Eyes" uses its "Burst Stream" attack to Kaiba directly and lower his Life Points to 0, defeating him.

For Kaiba's Penalty Game, Dark Yugi traps him in a Duel Monsters card, sending him to the World of Duel Monsters, where he will experience death, but it is only an illusion. Dark Yugi hopes that by becoming a card, Kaiba will come to understand the Heart of the Cards and then like Grandpa, then he will become a true game master.

Dark Yugi takes back the "Blue-Eyes White Dragon", to return it to Grandpa.

Several turns pass, in which "Summoned Skull" destroys a number of Kaiba's monsters, including an unidentified black robed monster. Kaiba is down to 800 Life Points.

Kaiba sneaks "Blue-Eyes White Dragon" into his hand and pretends to draw it. He then Summons it and tries to attack "Summoned Skull", but the dragon destroys itself as the card was stolen.

Dark Yugi activates his face-down "Monster Reborn", Special Summoning "Blue-Eyes White Dragon" to his side of the field. He attacks Kaiba directly with it, winning the Duel.

Episode 3 of Toei Animation's Yu-Gi-Oh! series, "Clash! The Strongest Monster" is based on this chapter and the previous one. A number of changes were made including: