"Let the Duel Begin!", known as "Duel Start!!" is the sixty-fifth chapter of the Yu-Gi-Oh! manga. In its first English printing, it was numbered as the sixth chapter of Yu-Gi-Oh! Duelist. In the 3-in-1 edition, its number was changed to match the original Japanese printing.

This chapter was originally printed in the Weekly Shōnen Jump magazine in Japanese. It has been reprinted in in Volume 8 of the tankōbon and Volume 5 of the bunkoban.

The Duelist Kingdom tournament begins. Dark Yugi tracks down Insector Haga to get revenge for their encounter on the boat. 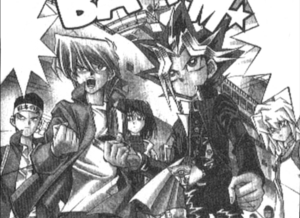 The contestants for Duelist Kingdom arrive on an island, located somewhere in the pacific, approximately 5 km in width.

Jonouchi sneezes having caught a cold from when he dived into the water to try and save Yugi's "Exodia" cards earlier. Dark Yugi apologizes for Jonouchi getting a cold on his behalf, but Jonouchi insists that it's nothing and is more bothered by Haga throwing the cards overboard. Dark Yugi glares over at Haga and vows to take him out first.

Saruwatari instructs the participants to go towards Pegasus Castle, where they are to hear an announcement from Pegasus. Pegasus appears on a balcony, where he welcomes the Duelists and explains some of the rules. He instructs each participant to place their Duel Glove on their left hand and insert their Star Chips into the holes on the wrist. He describes the Star Chips as the "life" of each Duelist and they must stake at least one in each of their Duels. If a player loses all of their Star Chips, they will lose everything and no longer be considered a Duelist. Having his split his two Star Chips with Jonouchi, Dark Yugi realizes that they must both win their first Duels. Pegasus explains that Duels will take place battle royal style around the island and the first Duelists to win ten Star Chips may enter the castle. Only then may they have a chance to win the "Honors". Dark Yugi wonders why such a large playing area is needed for a card game tournament and recalls Haga mentioning that there will be new rules in this tournament. Pegasus says that the tournament will begin in one hour and will last for forty eight hours.

Two minutes into the dueling, Dark Yugi, Jonouchi, Anzu, Honda and Bakura look around the island's plains. Bakura thinks the area seems peaceful and not like a place for playing Duel Monsters. Anzu points out how other people were just standing around doing nothing, meaning they're not the only ones who don't know what to do. Jonouchi spots a sign, saying that there was a lake to the right and a forest to the left and Dark Yugi suggests that they go to the forest, as he had seen Haga go that way earlier.

Inside the forest, Dark Yugi is confronted by Haga. He says that Haga at least had the courage to face him. Haga replies, of course; if he defeats Yugi first, the rest will be easy. He then challenges Dark Yugi to a Duel on the spot and leads him over to a battle box. Haga laughs to himself that Dark Yugi has already unknowingly fallen into his trap. 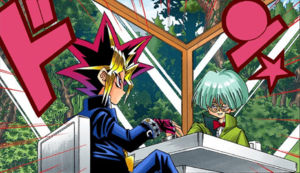 As they sit down to Duel, Haga is surprised to see that Dark Yugi is already down to one Star Chip and asks if he has already lost a game. He thinks that he'll only be needing to wager one Star Chip, but Dark Yugi says that he will be wagering them both. He reminds Haga that he had said he would be taking him out and it's like Ryuzaki said, it's either kill or be killed. Dark Yugi then says that he is staking one Star Chip and his life. Haga is excited by the new twist and accepts. Jonouchi, Anzu, Honda and Bakura all start cheering for Dark Yugi and a group of other Duelist gather around when they see that a Duel is taking place. 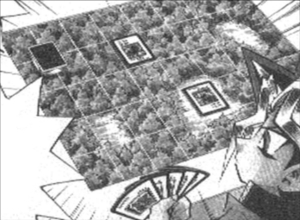 Haga Summons "Killer Needle", with 1200 ATK and Dark Yugi Summons "Mammoth Graveyard", which also has 1200 ATK. Dark Yugi gets "Mammoth Graveyard" to attack "Killer Needle". Having the same ATK, both monsters should be destroyed. At first it seems that only "Mammoth Graveyard" gets destroyed. Haga laughs and asks if Dark Yugi has figured out why he choose the forest as the stage for their Duel. He says that Pegasus gave him a special preview of the new rules and directs Yugi's attention to the board, where the landscape has been reproduced. Haga explains that the landscape from 40 meters has been around the Battle Box is being reflected on the board. In this case its 80% Forest and 20% Wasteland. Since Haga's Insects thrive in the forest, they get a Field Power Source, increasing their ATK and DEF when played in the forest. He laughs that Dark Yugi can't win against his Insects. However Dark Yugi smirks and tells Haga to take another look at his monster. "Killer Needle" had also been destroyed in battle because "Mammoth Graveyard" also got a Field Power Source from the Wasteland. Dark Yugi then claimed to have figured out the Field Power Source rule, the moment he sat down at the table.

Mammoth Graveyard attacks "Killer Needle" and both monsters are destroyed.

In the Yu-Gi-Oh! anime, the beginning of the fourth episode, "Into the Hornet's Nest" is based on this chapter. A number of changes are made, including: