Seto Kaiba travels to Duelist Kingdom, having awoken from his coma. 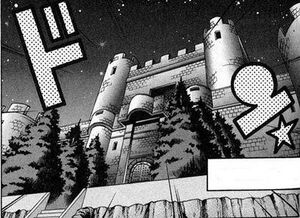 At Pegasus Castle, Croquet has just informed Pegasus that one of their agents at Kaiba Manor has reported that Seto Kaiba has woken from his coma and is heading towards the island. Frustrated, Pegasus says that this is a mess. One of the Big Five thinks that if this is true they may need to change their entire plan, but another disagrees, saying that they cannot turn back now. Another curses Kaiba, asking why he could not have just died. However Pegasus insists that there is no need for alarm; they will continue as planned and once Yugi is defeated KaibaCorp will belong to them. He claims to have already taken care of Kaiba, who will not reach the island. The Big Five take Pegasus' word and state that if Kaiba is alive, more than their deal would be in danger. Pegasus then steps out onto the balcony and pities Kaiba, who he thinks shall be sent back to Hell where he belongs.

Meanwhile on another part of the island, Dark Yugi has just defeated the Player Killer of Darkness and won back Mai's Star Chips. Mai compliments Dark Yugi on his win. However as he offers the Star Chips back to her, she says that she cannot accept them. She explains that Dark Yugi fought for them, so they are his, while she having lost a battle is out of the running. With no more Star Chips, she says that it is time for her to leave and walks away, saying that she was glad to have come to the island and met Yugi and his friends. However, she is called back by Jonouchi, Honda and Bakura, who have just woken from their sleep.

Anzu is surprised to see the boys awake and Jonouchi rhetorically asks who could sleep with that loudmouth talking all the time. Mai smiles and asks what is wrong with the others; they do everything together, even say goodbye. Honda checks the time with Bakura, who says that it is a little before 11. Honda says that in that case, they still have one more hour and reminds Mai that she had said they would be enemies tomorrow. Since it is still the same day, he concludes that they are still friends.

Dark Yugi says that he, Mai and Jonouchi came to the island to fight fair and square, but others, like the Player Killers hired out their skills to destroy for the sake of destruction. As far as he is concerned, they are not Duelists and he would rather not have them disgracing the honor of their battles. He holds out the Star Chips for Mai to take and suggests that they decide which true Duelist is the strongest. Anzu reminds Mai that it was her dream to fight Yugi. While Mai agrees, she is still uncertain about taking the Star Chips. 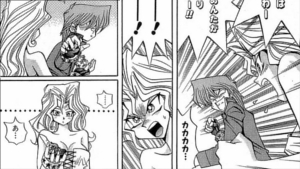 Jonouchi convinces Mai to take back the Star Chips.

Jonouchi steps forward and states that nothing is getting solved if they keep moping and that he would like to propose an alternate solution. When Anzu asks what it is, he grins and says "simple". He snatches the Star Chips from Dark Yugi's hand and exclaims that if Mai does not want them, he will take them. He laughs that he now has ten Star Chips and will be the first to Pegasus Castle. Mai becomes infuriated and yells at him not to dare take her Star Chips. She says that she will never forgive him for this and demands that he hand them over. Without arguing, Jonouchi returns the chips. He tells her that if her pride will not let her take the Star Chips, she can throw them in the ocean. However, if he was in her situation, he says that he would throw away the Star Chips or her dream. He then waves good night and heads back to his sleeping place.

Mai tells Dark Yugi that she will borrow the Star Chips, but while she is in his debt, she does not have the right to battle him. However when she earns that right, she vows that they shall fight fair and square. Dark Yugi agrees and says that he will be waiting.

Elsewhere, Kaiba is approaching the island, in a helicopter. He asks his guard how long it has been since Death-T, to which he replies about six months. To Kaiba it feels longer, as he feels he has not touched his cards in years. The guard says that they had all been waiting for him, hoping that he would get better. Kaiba takes out a report, which details everything that happened while he was gone. Mokuba had left it with the maid, the only person in the estate that he trusted. The guard says that he is worried and hopes Mokuba is safe. Kaiba assess the situation; Pegasus made a plot with traitors in his house to take control of KaibaCorp and kidnapped Mokuba. He vows not to rest until he destroys Pegasus.

The guard says that he means no disrespect, but reminds Kaiba that there is another enemy on the island, the boy who started all the trouble and if Kaiba beats him he can truly claim supremacy and will be number one. Kaiba thinks "revenge" and reflects on his Duel with Dark Yugi in Death-T. That is the last thing he remembers before the coma. Kaiba comments that Dark Yugi's fighting technique was unstoppable. He does not mind if his emotions boil over in revenge again and wants to battle him one more time. 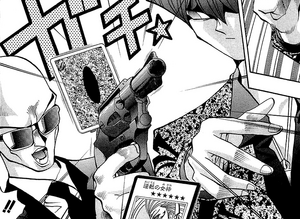 Kaiba looks out the window and notices that the moon is now on the opposite side of the helicopter than it was before, meaning that he has been flying around in circles. He realizes that the guard and the helicopter pilot have also defected to Pegasus. The guard sees that Kaiba has noticed and points a gun at him. He confirms that he has switched sides and says that Kaiba has to die and sink to the bottom of the sea now. He asks if Kaiba is ready, to which he replies that he would like to get his cards out of the way so they do not get blood on them. The guard allows for it, commenting that Kaiba really is the lord of the cards. He says that those are Kaiba's last words and prepares to shoot him. However Kaiba quickly jams one of the cards he took, "Gyakutenno Megami", into the gun, blocking its hammer and preventing it from firing. He berates the guard for making him damage a rare card and before the guard has time to react, Kaiba grabs the gun, snapping the guard's finger in the process. Kaiba says that if they want to kill him, they will have to kill the cards too. He then orders guard and pilot to jump out of the helicopter into to sea, threatening to kill them otherwise. He bids farewell to the two men and continues to fly to the island himself.

This chapter was redone in the start of episode 16 of the anime. All of theses events were skipped in the anime, except for the first event in Pegasus Castle. Kaiba had not been in a coma in the anime.