"Let's Find 'Love'!" is the forty-first chapter of the Yu-Gi-Oh! manga.

This chapter was originally printed in the Weekly Shōnen Jump magazine in Japanese. Its first English release was in the Shonen Jump magazine. It has been reprinted in volume 5 of the tankōbon and volume 4 of the bunkoban.

Yugi, Jonouchi and Honda end up facing the guidance counselor Tsuruoka in a game where they must find a hidden keychain or risk expulsion.

At the Kame Game, Yugi's mother calls him, saying that he will be late. She storms up the stairs thinking that there will be trouble if he is still asleep. 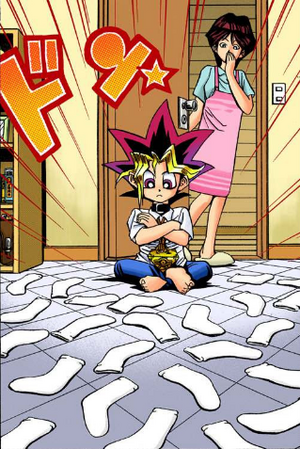 She opens the door to Yugi's room and finds him sitting on the floor staring at a lot of white socks scattered across the floor. She asks what he is doing, but Yugi tells her to not talk to him as he is trying to concentrate. Yugi looks hard at the socks and turns two over. Each of them have a heart symbol drawn on them. Yugi starts to celebrate. His mother is totally blank. She pauses and asks what he is doing. Yugi laughs that this is his Sock Concentration game.

The rules of Sock Concentration are displayed:

Yugi explains that he is training his sixth sense. His mother then walloped him with a ladle, suggesting that he train his mind for school first. She tells him that Anzu came over and is waiting at the front door. Yugi is surprised and quickly grabs his schoolbag, asking his mother why she did not tell him that first. She reminds him that he had told her not to talk to him. Yugi says "see you later" and rushes to the front door.

Anzu greets Yugi and says that she thought it would be fun to walk to school together. Yugi is delighted that he gets to be alone with Anzu all the way to school. Anzu sighs; School is going to be a drag today, as the results from their achievement test will be up today and they will have their names plastered onto the wall with their scores. However, Yugi is excited over the results. Anzu asks why he is so happy. Yugi informs her of a game Katsuya Jonouchi and Hiroto Honda promised to play with him the day the results were out and tells her that they have bet hamburgers on it. 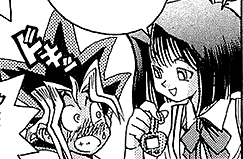 Anzu suggests that she and Yugi test their love compatibility through the Lovely Two models.

The talk of a game reminds Anzu of something. She pulls a device out of her pocket and asks if Yugi has seen one of them before; It is something all the girls have right now. Yugi has not seen one before, but takes a look and asks if it is a new keychain game. Anzu replies that it is not really a game; It is a portable love tester, called Lovely Two. Yugi is astonished that Anzu has something this girly. Anzu explains that you enter your name, birthdate and blood type. She does not know how it works, but the keychain creates a special waveform from your personal data. When you are near someone with another Lovely Two, you press a button. If they have matching waveforms, both keychains make a noise like a bell ringing. If this happens, the two people are supposed to be perfect for each other. Yugi looks at the Lovely Two interestedly, but is a bit disappointed that it is not really a game.

Anzu takes out another Lovely Two. Since she has two, she allows Yugi to keep one. Yugi is delighted that Anzu is giving him a gift and wonders if this could mean something bigger. Anzu suggests that Yugi enter his data and Yugi happily does so. Anzu titters craftily and asks if Yugi wants to see how well they fit together. Yugi's heart thumps and he stutters out an "okay". Yugi nervously pushes the button, but nothing happens. Disappointed, he sighs and wonders if this means he and Anzu do not belong together. Anzu smiles and says that their biorhythms must be off today or something and she is sure that they will ring next time. 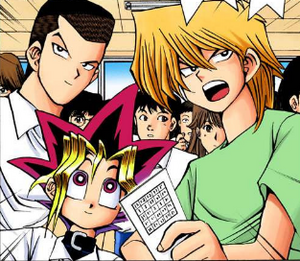 Honda, Yugi and Jonouchi get ready to play the Achievement Test Bingo Game.

At school, students gather around the test results, with mixed reactions of happiness, disappointment and annoyance. The names of the students are written in Japanese. This is not translated in the English version. Jonouchi, Honda and Yugi make their way up to the front of the crowd and hold out score cards. Jonouchi announces that this is war to settle the score. Yugi says that he calls it the "Achievement Test Bingo Game".

The rules of the game are displayed:

The game starts and the three boys start filling in their boxes. Anzu looks at them abashedly and asks what they are doing.

The manga includes a grid for the reader to fill in numbers and play the game too. The next page contains the colors corresponding to the gender of the top 50 students, but not their names. The English versions says that the names are not shown to protect the innocent.

Jonouchi looks angrily at his card, having not got a single line. Yugi celebrates that he got three. Honda is happy enough that he got just one. As promised, Jonouchi is to buy three hamburgers for Yugi and two for Honda. Jonouchi stands by the promise and Honda wonders if Yugi ever loses.

The guidance counselor, Tsuruoka approaches the three and asks if they are having fun and what could be so fun about achievement test scores. The three boys know that this means trouble. Tsuruoka asks if they thought that the test was a game and points to their scores. Jonouchi, Honda and Yugi came 392nd, 380th and 372nd, respectively, out of 400 students. He asks where their laughter is now. In the Japanese version, he calls them "Kings of idiots". In the English version, he calls them "Three Stooges". They wish he did not say that out loud as the other students start laughing at them.

Tsuruoka notices something inside Yugi's shirt pocket and removes the Lovely Two. Yugi and Anzu both look at him in anxiety as he takes it. Tsuruoka holds the keychain out, stating that you cannot bring games to school. Yugi rebels, saying that it is not a game and is very important to him. Honda and Jonouchi stand at Yugi's side and demand that Tsuruoka give it back; Being a teacher does not give him the right to take other people's possessions. Tsuruoka retorts that unskilled slackers like them do not have the right to talk back to a teacher. Jonouchi frowns and asks "Whaddaya mean unskilled?". Education is a noble profession, Tsuruoka says, and as such, teachers have the right to do anything to slackers like them. He could even smash this, he says, and drops the Lovely Two on the floor. Before he can step on it, Yugi switches to Dark Yugi, who insists that they do have skills, skills that Tsuruoka could never match. Jonouchi and Honda are surprised by the transformation. "I have never lost a game", Dark Yugi announces. Tsuruoka is stunned by what he said and Anzu realizes that this is the other Yugi.

Thirty minutes later, the game begins. The school grounds are huge, Dark Yugi thinks, so he will have to narrow the search area. Anzu thinks that although Dark Yugi is good, this is hopeless. Dark Yugi looks inside a locker.

Jonouchi and Honda arrive with a wheelbarrow, shovels and a pickaxe, which they borrowed from the construction site next door, in case they need to do some digging. Dark Yugi thanks them, but does not believe that Tsuruoka went outside and is confident the keychain is inside the building. Jonouchi asks how Dark Yugi knows this. Dark Yugi explains that he checked Tsuruoka's outdoor shoes at the teachers' entrance and that there is no sign that he went out.

Tsuruoka spies on them walking down a corridor through a nearby window. He laughs at them for searching so hard and thinks that they will never find it, as the keychain is hidden in his secret place. He laughs, saying that the three of them are as good as expelled and that the next time he sees them they will be bagging his groceries.

Dark Yugi looks under a desk with 42 minutes and 18 seconds to go. He starts to sweat when there are only 21 minutes and twenty seven seconds left. Anzu entrusted him with the keychain, so it is a treasure and he must find it, he thinks. 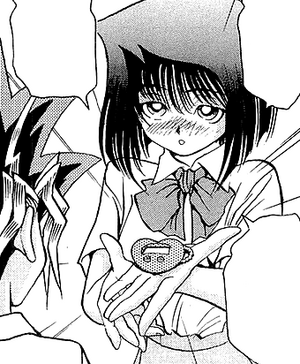 Anzu watches Dark Yugi searching. She blushes and her heart thumps. She thinks that he is so desperate to find the spare keychain that she gave him. The word "spare" sparks an idea. She approaches Dark Yugi and shyly stutters that she thought her game might be helpful. Dark Yugi takes it and she says that it might not be and apologizes. However, Dark Yugi clasps his hand around it and says that it is perfect. Anzu is surprised at first, but smiles after comprehending.

Holding Anzu's Lovely Two, Dark Yugi dashes through the school and thinks that people tend to hide things where they can see the hiding spot, so the keychain must be somewhere near Tsuruoka. 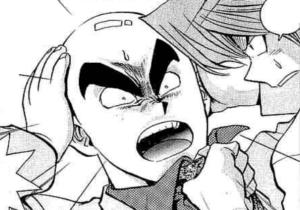 Tsuruoka is revealed to be bald.

Dark Yugi, Jonouchi and Honda arrive at the door to the teachers' lounge. Anzu is a few steps behind them. Tsuruoka orders them out, reminding them that students are not allowed in. However, this only confirms Dark Yugi's suspicions that the keychain is in the room. Tsuruoka argues that he is wrong, the keychain is somewhere they cannot reach. Dark Yugi interprets that as somewhere they cannot touch. He explains that he thought about this and had wondered where he would hide it if he was Tsuruoka. First, he would use his teacher privileges. Students cannot raise a hand to a teacher, they cannot even touch a teacher, Dark Yugi says, so the safest place to put the device is on Tsuruoka's own body. Tsuruoka sweats and says that as a teacher, he is like a god to them, so they would not dare touch him or he would expel them. He laughs and asks what they are going to do now. They cannot prove he has it without touching him.

With 30 seconds left, Dark Yugi takes out Anzu's Lovely Two. Anzu closes her eyes and begs the bell to ring. Dark Yugi presses the button and the beeping starts. Jonouchi wonders what that noise is. Tsuruoka holds his hands next to his head. Jonouchi sees that the sound is coming from his head. He and Honda leap at Tsuruoka. With this much proof, Jonouchi says, he cannot say that they cannot touch him.

Jonouchi picks up Tsuruoka, and sees that he is bald. Inside his wig, they find the keychain. Tsuruoka begs them not to tell anyone his secret. Jonouchi holds the keychain with 5 seconds left and says that it looks like they win. Dark Yugi takes back his Lovely Two and returns the other to Anzu.

Anzu thinks to herself that whenever she sees Dark Yugi, she will hear the sound of that bell again, in her heart.