From Yugipedia
Jump to: navigation, search
This article is about the shop. For the card with the same Japanese name, see "Jar Turtle". 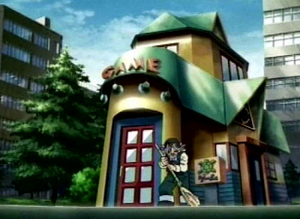 Kame Game is a location in the Yu-Gi-Oh! manga and anime. It is Solomon Muto's game shop and also the family residence of Solomon, Yugi's mother and Yugi Muto. The word "kame" is Japanese for "turtle". In the dub, the shop's name is never mentioned and only the word "game" written on the front.

The shop has upstairs bedrooms and other living quarters shown on occasion. 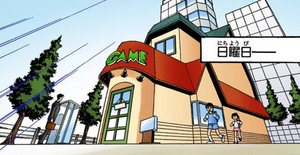 Kame Game, in the manga

Sugoroku Mutou lives in the shop, along with his daughter-in-law and his grandson, Yugi.

Yugi found the Millennium Puzzle on a shelf in the shop. Eight years later, he solved the puzzle in his bedroom, while under pressure to figure out what to do about Ushio's self-imposed bodyguard fees. He then became possessed by Dark Yugi for the first time.[1]

Kame Game sold Sound Pierrot dolls for ¥2,500, two of which Dark Yugi used in the silence game with Sozoji.[2]

When Hiroto Honda was looking for a gift for Miho Nosaka, Yugi and Katsuya Jonouchi brought him to Kame Game to browse. Sugoroku recommended the love jigsaw puzzle, which Honda thought was perfect and purchased.[3]

Yugi brought his friends to the shop to show them his grandfather's "Blue-Eyes White Dragon" Duel Monsters card one day. Seto Kaiba entered the store shortly afterwards and saw the card. Grandpa refused to sell or trade the card to him, but Kaiba later attempted to steal the card.[4]

In his room, Yugi trained his sixth sense by playing Sock Concentration, until getting hit with a ladle by his mother, who said he was going to be late and that Anzu Mazaki was at the door.[5]

Sugoroku introduced Jonouchi to Monster Fighter in the shop and sold him the Killer Emaada figure, which he used to battle with Yugi. The next day, Yugi and Jonouchi showed them to their classmates, who became interested in buying them. Over the next week, they became hugely popular at the school and were sold out at Kame Game.[6]

Sugoroku was showing the dogs and jackals game to Yugi, Jonouchi, and Anzu at Kame Game, when were interrupted by Imori, who brought the Dragon Cards into the shop to ask Sugoroku for more information on them. Having heard rumors of the game, Sugoroku feared that breaking the seal containing the cards would cause yin and yang to clash, creating a warped power. Imori promised he would not break the seal, but lied. He further researched the Dragon Cards and planned to use their power to face Yugi in a Shadow Game to win the powers of the Millennium Puzzle.[7]

Yugi invited his friends over to watch the finals of the Japanese National Duel Monsters Championship. Afterwards he opened the package containing Pegasus' videotape that he received in the mail. Upon placing the tape in the VCR, he was challenged to a game of Duel Monsters by what seemed to be a prerecording of Maximillion J. Pegasus. The Duel turned out to be a Shadow Game,[8] which Dark Yugi lost, causing Pegasus to trap the soul of Sugoroku in the videotape as a Penalty Game, thus incentivizing Yugi to take part in the upcoming Duelist Kingdom tournament.[9]

The next day, Yugi received his invitation to Duelist Kingdom when he got home. Katsuya Jonouchi, Anzu Mazaki, Hiroto Honda, and Ryo Bakura came over shortly afterwards, distressed since Jonouchi had also received a videotape in the mail, fearing it could be from Pegasus. Since Jonouchi did not have an 8 mm player, they watched the tape in the living room at Kame Game. Instead the tape turned out to be from his sister, Shizuka Kawai, whom Jonouchi had not previously mentioned to his friends out of shame of not being able to help prevent her imminent blindness. However Dark Yugi insisted Jonouchi join him in the Duelist Kingdom tournament, by splitting his entry Star Chips, so that they could use the prize money to fund surgery for Shizuka's eyes.[10]

Kame Game had some rivalry when Mr. Otogi opened the Black Clown.

Yugi Mutou found the Millennium Puzzle in the basement of Kame Game when he was a child. Eight years later, while under pressure to figure out what to do about Ushio's self-imposed bodyguard fees, he came close to solving the puzzle in his bedroom, before realizing he was missing a piece and going to Domino High School to look for it.[11] 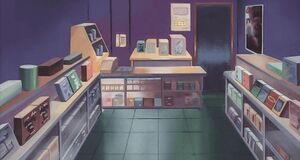 Yugi took his friends here to show them Solomon's "Blue-Eyes White Dragon" Duel Monsters card one day. Seto Kaiba also entered the store that same day and saw the card. Grandpa refused to sell or trade the card to him, but Kaiba kidnapped him later to Duel him for the card.[13]

Kame Game had some rivalry when Duke Devlin opened the Black Clown.

A number of years later, Jaden Yuki and his friends visited Kame Game on a trip to Domino City. Solomon Muto was still running the shop.