The Cyber Art Dojo (サイバー流道場 Saibā Ryū Dōjō)[1] is located in a mountainous area, which was run by Duel Academy's Chancellor Sheppard.

Cyber Art is a term used in Yu-Gi-Oh! GX anime that denotes the "Cyber" cards used by Duelists such as Zane Truesdale and Chancellor Sheppard. Zane Truesdale was the dojo's greatest student and therefore was given "Cyber End Dragon", the ultimate card of the Cyber Art. 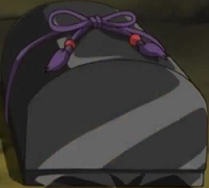 The Underworld Deck (hidden behind the Dojo's poster)

Zane used Cyber End Dragon and other Cyber Art cards throughout his time at Duel Academy and in the Pro League. After his breakdown in the Pro Leagues and subsequent change of personality, he journeys back to the dojo and confronts Sheppard, wishing to take possession of the Underworld Deck ("Cyber Art Reverse" in the original), a Deck of forbidden cards, the centerpiece being "Cyberdark Dragon".

In the past, the dojo apparently had a rivalry with another dojo, consisting of users of Jinzo Art cards. Eventually, the Jinzo Art Duelists were defeated and the style was not heard from further.

Later, a Jinzo Art Duelist named Makoto Inotsume confronts and defeats Sheppard in a Duel and then declares his intention to track down Zane to Duel him as well. He wishes to defeat all Cyber Art Duelists, prove the superiority of the Jinzo Art, and abolish the Cyber Art dojo. By this point, Zane was very weak and often had to use a wheelchair. Despite this, he Duels Inotsume anyway. He collapses midway through the Duel, though he had been losing it since the beginning.

Zane's brother Syrus resolves to take Zane's Deck and finish the Duel for him. Inotsume gives him three days to train using the Deck. Syrus begins to experience the same heart problems as Zane. At the advice of Jaden Yuki, Syrus "makes the Deck his own" and combines it with cards from his own "Vehicroid" Deck. This new "Cyberroid" Deck is able to defeat Inotsume. Syrus ceases experiencing heart problems as he begins to respect the Deck, which is something Zane hadn't done.