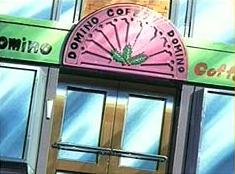 Domino Coffee is a restaurant in Domino City in the anime and manga. In the English anime, the restaurant's name is erased. In the manga, its name is never mentioned.

Téa Gardner and Yami Yugi went here among other places on their date. In the anime, the drinks they were served has logos resembling those of Starbucks. These logos were erased in the English anime.