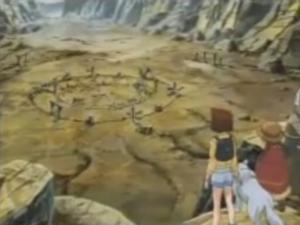 The Stone Wilderness is a sacred valley in the anime, where lost souls wander. It is unnamed in the dub.[1]

In the center of the valley is a circle, which reflects the heart of whoever enters. Both good and evil souls can dwell here. If someone enters, they may not return.[1]

After Yami Yugi lost Yugi's soul because Yami played "The Seal of Orichalcos" in his Duel against Rafael, Ironheart took him to the Stone Wilderness to meet Yugi. As Yami approached the circle, voices told him to turn back, but he called on the voices to show themselves. Yami then walked past the souls of people he had defeated in Duels, before meeting Yugi.[1]

Yami tried apologizing, but Yugi blamed Yami for what happened and challenged him to a Duel. Since Yugi was the mirror of Yami's heart, he initially drew the same cards as him. Yugi managed to shuffle his Deck and reset their hands to change that. Since there was still darkness in Yami's heart, Yugi was able to draw "The Seal of Orichalcos". He played it and used the same strategy Yami used against Rafael, where he callously sacrificed monsters to achieve victory. Yami convinced himself that he must win, or he would not be able to rescue Yugi later on. Yami managed to counter the sacrificing gambit and won the Duel. Yugi was pleased that Yami won and asserted that in defeating him, Yami has resisted the Orichalchos' temptations and purified the darkness in his heart.[1]

The following souls are known to have inhabited the Stone Wilderness: