From Yugipedia
(Redirected from Keith Howard)
Jump to: navigation, search
For the manga version of this character, see Keith Howard (manga).

Bandit Keith (バンデット・キース Bandetto Kīsu) is a character in the Yu-Gi-Oh! anime and one of the secondary antagonists of the Duelist Kingdom arc. In the Japanese version, his full name is Keith Howard (キース・ハワード Kīsu Hawādo).[3] He gained the nickname "Bandit Keith" for his success in the Duel Monsters circuit, and once held the title of U.S. Duel Monsters Champion. His success plummeted after he was humiliated by Pegasus, with his grudge motivating him to enter Duelist Kingdom, where he was put in conflict with Yugi Muto and his friends. 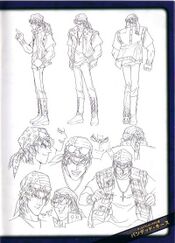 Keith is a tall blonde-haired man with blue eyes. He is thin in the face and unshaven - in his prime, he was more clean-shaven. He wears a red shirt, a large sleeveless leather vest with studded shoulders and a high collar, tan pants, and tall leather boots. Keith also wears an American flag bandanna over his shaggy blonde hair, sunglasses, studded wristbands that he uses to conceal cards, and a cross necklace in addition to a simpler cord. Prior to his fall from grace, he kept his sunglasses on his forehead and didn't wear a vest. While he was under the control of the Millennium Rod, he wore the purple cloak of the Rare Hunters, using a mechanical dispenser in place of his wristbands to cheat.

During the final round of the Intercontinental Championship tournament in New York City, Keith was up against Maximillion Pegasus, who used his Millennium Eye to read Keith's mind and predict his moves. Afterwards he wrote something down on a piece of paper and calls over a boy named Sam from the audience. He tells the boy to Duel against Keith using the instructions on his note. Using it, Sam defeats Keith in one turn.

Keith, shocked and humiliated at being defeated by a child, fell into depression. He later sneaks into Duelist Kingdom to defeat Pegasus and reclaim his glory.[4] 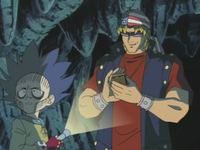 In Duelist Kingdom, he trained three Duelists; Zygor, Sid and Bonz. He had Bonz Duel Joey Wheeler and lent him several rare cards, including "Call of the Haunted", to strengthen his Deck. [5] Although Keith directed nearly all of Bonz's moves, he still lost. Afterward, Keith called Bonz a loser and ignored Joey's challenge for a Duel face-to-face. After leaving the arena, Keith trapped Joey, Yugi Muto and their friends in the cave, then attacked his own minions and stole their Star Chips, giving him enough to enter the castle as the first finalist. [6]

Later, Keith was surprised to see Yugi and Kaiba on one of the castle walls. [7] 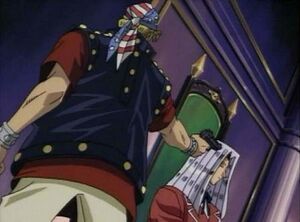 Keith holds a gun to Pegasus's head. (the gun is edited out in the dub)

Keith later Dueled Joey in the semifinals, using a Machine Deck. His Machine cards had superior firepower and immunity to any magical attacks. Keith also cheated by pulling cards out from underneath his wristband to power up his monsters, but Joey still won. Afterwards, Keith refused to accept defeat, and claimed that Joey should be disqualified since the card he used to enter the semifinals was not his. Unfortunately, while Joey admitted that Mai gave him her card, he then asked how Keith knew - Pegasus chuckled and explained that Keith obviously stole the entry card, certain that Joey would not be able to find it in time for the duel.

Pegasus then has Bandit Keith disqualified - not just because of his thievery, but for "improper behavior taking place during the match" due to the cards hidden beneath his wristband. Pegasus ordered his security guards to take Keith away, but Keith broke free and confronted Pegasus, pointing a gun at his head (the gun is removed in the dubbed anime) and demanding the prize money. Pegasus mocked Keith, saying that he had sunk to being the worst criminal scum since their Duel in America. As Keith stepped forward, Pegasus hit a hidden button on the floor with his foot, causing the floor beneath Keith to fall away and dumping him into the ocean. 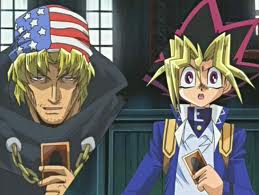 While struggling against the ocean currents, Keith was rescued by Rare Hunters, and fell under the control of Marik Ishtar. Disguised as a fortune teller, Keith asked Yugi Muto if he could see his Millennium Puzzle. When Yugi handed it over, Keith stole it and fled to a hidden arena. Chaining the Puzzle to the arena, Keith said the only way for Yugi to reclaim it was to Duel him. In the English anime, Marik had Keith Duel Yugi to win the Puzzle for him; in the Japanese anime, Marik had Keith Duel Yugi in the hopes that Dark Yugi would appear.

Although Keith was hooded, Yugi deduced his identity from his Machine Deck. At this point, Marik revealed that he and his Rare Hunters rescued Keith and took him under his control. Keith's Deck, augmented with rare cards added by the Rare Hunters, as well as hidden cards under his robe's sleeves, begins to overpower Yugi. However, the Duel was watched by Yami Bakura, who sensed the dark energies from Keith and realized he had been hypnotized. Refusing to let Yugi lose and forfeit the Puzzle, which he wanted for himself, he used the Millennium Ring to break Marik's control of Keith. While Marik and Keith struggled for control, Keith shattered the Puzzle against the console - in the English anime, he does this because Marik commands him to; in the Japanese anime, Keith does it himself because he thinks the voice trying to control him is the spirit of the Puzzle. Yami Bakura then swung down, knocking Keith off the arena.

While Yami Bakura left Yugi to put the Puzzle back together, Keith hallucinated that Marik was nearby, giving him orders. Grabbing a length of pipe and attacking the images, Keith shattered the arena power unit, causing a fire. While the building burned, Joey and Tristan broke down the door. Terrified, Keith ran past them, claiming the arena was haunted. 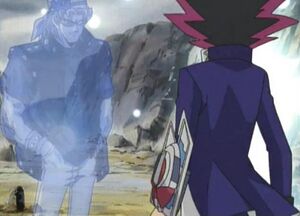 Keith's "lost soul" was seen when Yami Yugi ventured to find his other half and when Yami, Kaiba and Joey entered Dartz's lair.[8]

In Yu-Gi-Oh! 5D's, a parody of him named Pirates Keith was listed as one the duelists defeated by Hunter Pace. [9]

United States The King of Duelists[edit]

In the United States The King of Duelists tournament finals, Pegasus had a beginner from the crowd Duel Keith by following a set of instructions Pegasus wrote, in order to humiliate Keith. Most of the Duel was not shown, so only a single one of Keith's cards is known. 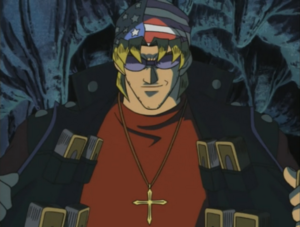 As a professional Duelist, Keith has a large number of Decks which he keeps hidden inside of his jacket, consisting of several different Deck themes. During his time in Duelist Kingdom, he lends several cards to Bonz to fortify the young Duelist's Zombie Deck (including "Zanki" and "Crawling Dragon"), although Keith's Main Deck consists of all sorts of Machines as well as handful of Fiend Type Monsters.

In his Duel with Yugi while Keith is being manipulated by Marik Ishtar, he also uses rare and powerful cards provided by the Rare Hunters, including the legendary "Zera the Mant". Despite his reputation, he cheats by hiding cards in his wristband. Similarly, when he wears the Rare Hunter robes, a claw mechanism feeds cards directly to his hand. Because the Duelists are so far from each other when Dueling at an arena, Keith's opponents rarely realize he is cheating.