From Yugipedia
Jump to: navigation, search
"Pandora" redirects here. For the card, see Pandora (card).
For other versions of this character, see Arkana (disambiguation).

Arkana, known as Pandora in the manga and Japanese version, is a member of the Rare Hunters organization in the Yu-Gi-Oh! anime. He uses "Dark Magician" similar to Yugi Muto, but his magician wears red and gold robes instead of purple, has slightly darker skin, silvery hair, black markings under the eyes and on the chin, and a more sinister expression. Prior to becoming a Rare Hunter, Arkana was a professional stage magician. 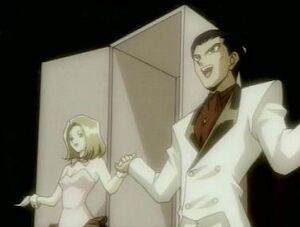 Arkana in his prime, performing with Catherine 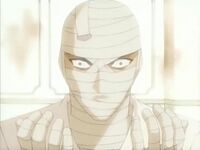 Arkana despairing at his ruination

His life went downhill after an escape trick failed, being caught in a locked box's explosion and scarring his once-handsome visage, which led him to wear the mask that he is seen wearing during the Battle City tournament. With his reputation and face ruined, Arkana fell into despair and selfishly focused on his own dilemma while rejecting Catherine's love, which caused her to leave him.

Eventually, Arkana came to realize that Catherine's love was too important to him to lose, but that it was already too late, as she was gone. Losing both his love and career, a ruined and depressed Arkana stumbled from day to day on the verge of giving up hope when he met Marik Ishtar, who promised to help him regain the love of his fiancée if he became a Rare Hunter and killed Yugi Muto.

Arkana's losses seemed to have a negative impact on his psyche, as he became sadistic and insane during his Duel with Yugi, laughing at the prospect of a fatal consequence of the duel, and believing that, as the master of the Dark Magician, he has the right to sacrifice his monsters' souls to win, doing so in such a gleeful and remorseless manner.

Assigned in the Battle City tournament to Duel Yugi Muto, Arkana took inspiration from his background as an escape artist, and trapped Yugi in a Duel arena where the loser would get his legs cut off by a buzzsaw (in the English dub of the anime, the buzzsaws were changed to Dark Energy Discs that sent the loser's mind to the Shadow Realm upon contact). Arkana acted insanely sadistic throughout the entire Duel, while rejecting all offers to end the unnecessary gruesomeness by claiming that this was his great show of escaping from the jaws of death, much to Yugi's disgust. 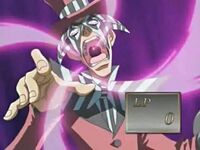 In the Japanese anime, Arkana also made a reference to Pandora's Box, a nod to his own name, and that the box containing the key to their shackles was the one hope of their escape. Furthermore, Arkana used the stripper technique, one of the many card-cheating techniques he learned from his previous profession, and cruelly sacrificed his monsters to win, all the while treating his monsters as dispensable slaves and claiming that ruthlessness to even one's own "slaves" is necessary to victory; in the dub when Yugi tells him that he must believe in the Heart of the Cards instead of Marik if he is Dueling for his lost love, Arkana claims his Deck was made for the sole purpose of defeating Yugi, and after that, he will have no more use for it. He made claims that he was the ultimate Dark Magician user based what he considered to be his Deck's superiority in terms of summoning speed and spell card powers and having three Dark Magicians, which led him arrogantly believe he is the the ultimate archmage; ironically, he had no knowledge of the existence of "Dark Magician Girl" until Yugi played it against him. Eventually, because Arkana betrayed his cards, Yugi managed to defeat him (due to the fact that Dark Magician Girl's strength increased for each Dark Magician in the Graveyard, and since Arkana sacrificed his own, it gave her a necessary power-up to defeat him). 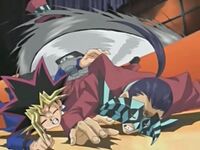 As the buzzsaw approached Arkana, he, at first, put up dramatics by screaming in feigned horror, then planned to use a spare key he hid in his sleeve, but Marik used his Millennium Rod to erase the key from his mind as penalty for his failure, ignoring Arkana's pleas for mercy. 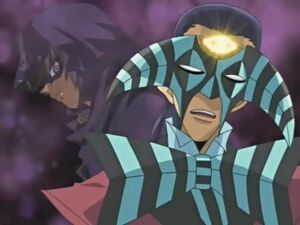 After Yugi saved him, Arkana rushed towards the curtains where Catherine was supposedly waiting for him; she turns out to be a mere dummy, but Arkana apparently lost his sanity, caressing and apologizing to the doll as though it was his true love (in the English dub, he lamented how he was deceived by Marik, and then deluded himself by saying that perhaps Marik was hiding the real Catherine elsewhere). Marik then spoke to Yugi through Arkana about the Tomb Keepers and his ultimate goal is to free himself of the duty that he never wanted. Marik then left, leaving Arkana unconscious. 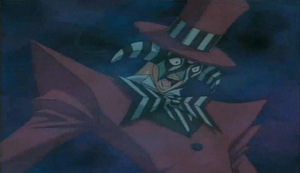 Marik's memory of Arkana is erased

Arkana made an additional appearance during Yami Marik's Duel with Mai Valentine at the Battle City Finals. After Marik's "Makyura the Destructor" was destroyed during their Shadow Game, Marik's memory of Arkana was erased, to which Marik showed sick satisfaction. 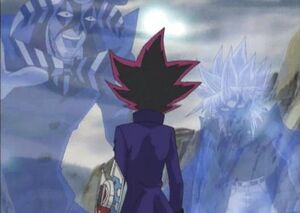 In the Waking the Dragons arc, Arkana makes a cameo as one of the "lost souls" seen alongside Yami Marik wandering about the sacred circle as Yami Yugi ventures to find his other half. [1]

Arkana uses a "Dark Magician" Deck centered around the "Dark Magician" by supporting it through an array of cards such as "Thousand Knives" and "Dark Renewal". Arkana's "Dark Magician" cards are all illegally trimmed so that he can manipulate what he is about to draw. Unlike Yugi, he has 3 copies of "Dark Magician". This fact is reiterated in episode 62 after he draws "Dark Magic Curtain" when he says "...and what kind of master would have only one Dark Magician in his Deck uhmm? My first one might be gone, but I have another Dark Magician and he's waiting to destroy you, Yugi!"