Rare Hunter 3 is a character in the Yu-Gi-Oh! manga and anime. He is a member of the Rare Hunters. 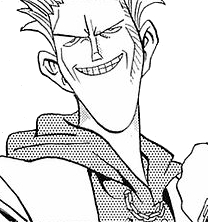 Rare Hunter 3 in the manga.

Rare Hunter 2 and Rare Hunter 3 were sent by Marik Ishtar to Duel Dark Yugi in Battle City. The two confronted him and refused to let him past unless he could defeat them in Duels. They explained that Marik would kill them if they let him past and if he refused to Duel them, Katsuya Jonouchi would be killed. Neither of them wanted to be the first to Duel, so they played roshambo for it, but kept tying with each other.

Eventually Seto Kaiba appeared and suggested that they both fight him and Dark Yugi as a Tag Team. Kaiba claimed that one of the reasons he held the tournament was to wipe out the counterfeiting Ghouls and he was Dueling them for that purpose, rather than helping Dark Yugi's friends. After a few turns, Kaiba easily defeated both Rare Hunters with "The God of Obelisk".[2]

In the dub of the anime, Umbra claims to be this character. Although this is not explicitly stated in the original Japanese version, both characters share the seiyu of Koji Ishi as well as being both voiced by Andrew Paul in the dub and both being tall and having blue hair.

The only known cards in the Rare Hunter's Deck are an unseen monster that he Set and "Mirror Force".