Isis (アイシス Aishisu) is a character in the Yu-Gi-Oh! manga. She is named after the Egyptian deity, Isis. This is the original depiction of the character, Isis.

Isis was a high priest, serving Pharaoh Atem. She possessed the Millennium Tauk, allowing her to see visions of the future, and partook in the conflict with Bakura, King of Thieves and Zorc Necrophades.

Isis' twentieth-century counterpart is Ishizu Ishtar, who is similar to her in name and appearance and likewise possessed the Millennium Tauk. 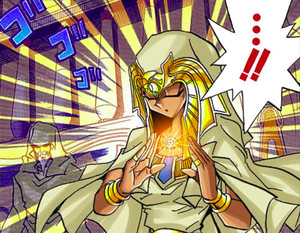 With the Millennium Tauk, Isis detected an evil presence, someone with incredible powers of heka approaching the palace, shortly before Bakura, King of Thieves arrived.[3] She took part in the Diaha with Bakura, summoning her personal ka, Spiria, to help battle Diabound, until Atem ordered the high priests to stand down.[4] She then witnessed the revelation of Atem, as the chosen pharaoh, capable of wielding the three hidden gods, as he summoned Obelisk, forcing Bakura to retreat.[5]

Isis took part in the mock Diaha with the other high priests, where she teamed up with Mahado and Kalim to battle Seto, Akhenaden and Shada. She summoned Spiria, who used the "Rainbow Barrier" ability to shield her teammates. The barrier was dispelled by Shada's Zerua and Spiria was soon defeated by Seto's Duos, whose power had grown by sacrificing its own allies. Afterwards, she witnessed the mock Diaha between Atem and Seto.[6]

Following Mahado's death in a Diaha with Bakura, Isis, the other priests and pharaoh were shown the stone slab for Mahado's spirit, which had been fused with his Magus of Illusion ka. As they tried to determine Bakura's faith, Isis was asked if she could use the Millennium Tauk to see Bakura's future. Seto demanded to know why she had not forseen Mahado's actions, but she reminded him that she could not see the futures of Millennium Item holders. The fact that she could not see Bakura's future led to conclusion that he had either died or taken Mahado's Millennium Ring. Isis then sent Spiria to the Valley of the Kings to use her clairvoyance to search for Bakura. Mana arrived at the slab, weeping over the death of her master and requested that Atem summon him from the slab. Isis attempted to comfort her, insisted that she give Mahado time to rest his wounds and reminded her that she would not be able to see him, as her heka was not strong enough yet. And said that Mana must train hard in order to follow in Mahado's footsteps.[7]

After Atem disappeared following another Diaha with Bakura, the Millennium Tauk showed Isis a prediction for the future of the kingdom. She saw a ripple in the waters and the reflection of shadows. She informed the priests and said that if it is only one ripple, it will fade soon, but if two or three overlap, it will become a great swell that will drown them in tragedy. However, she claimed that the tragedy could be prevented by using a vessel to hold the swell. Akhenaden believed her prediction referred to Seto succeeding Atem as pharaoh.[8]

Isis' ka, Spiria, succeeded in locating Atem, alive in a canyon on the edge of the city. With Shada being the priest in the nearest position, Isis sent him to rescue the pharaoh. Shada reported to Isis that he had located Bakura's lair in Kul Elna and requested that she send reinforcements as he and the pharaoh were heading there.[9]

The high priests arrived at Kul Elna for the final battle with Bakura. Isis summoned the ka Mystical Elf to help attack Diabound from four directions at once. However she was ultimately destroyed, causing pain to Isis.[10] Although Bakura was defeated, Akhenaden managed to gather the seven Millennium Items, including Isis' Millennium Tauk, and place them in the stone tablet,[11] resurrecting Zorc Necrophades and becoming the High Priest of Darkness.[12]

Isis continued to serve as priestess under Seto's rule, when he succeeded Atem as pharaoh, following his death.[14] 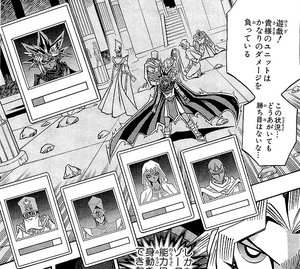 Isis, as one of the cards in Dark Yugi's deck, in the Shadow RPG

When Dark Yugi played the Shadow RPG against Dark Bakura in the twentieth century, he replayed his life as Pharaoh Atem. Each player had a deck of blank cards, which filled in as they regained memories. Among Dark Yugi's cards were the priests, including Isis. The players could use cards containing people to control their actions. When the players did not issue commands to their cards, they behaved according to the motives they had in the original course of events.[15]

When Atem passed through the Door to the Afterlife, his companions from ancient Egypt, including Isis, stood at the other side.[18]

Isis has used the following ka: