Honda started out as a bully, who would along with Katsuya Jonouchi, would pick on Yugi Mutou. However soon after Jonouchi became friends with Yugi, he got Yugi to help when Honda had a crush on Miho Nosaka, resulting in Honda befriending Yugi.

Honda accompanies Yugi on most of his adventurers. His fighting and shooting skills prove useful in earlier games. During Duel Monsters tournaments, he and Anzu Mazaki provide support and encouragement for Yugi and Jonouchi. 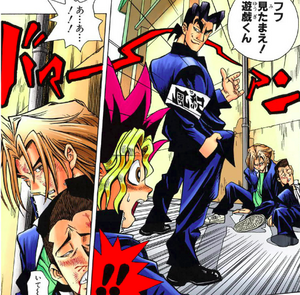 Honda and Jonouchi used to bully Yugi at school. Together they took the unsolved Millennium Puzzle from Yugi and teased him about it. However Anzu Mazaki arrived and told them off, causing the two boys to flee. While talking about what happened in the hall, Honda and Jonouchi met the hall monitor, Ushio, who overheard them mentioning bullying. Jonouchi tried telling Ushio to stay out of it, but knowing how influential Ushio was, Honda restrained Jonouchi and said nothing important about bullying. The next day Ushio beat-up Jonouchi and Honda, accusing them of bullying Yugi. However Yugi tried defending them when he found out, which resulted in him being beaten-up too.[3]

Although Jonouchi became friends with Yugi after the encounter with Ushio, Honda still forced Yugi to carry stuff and buy pornographic magazines for him.[4]

Honda lent his air rifle to the class for usage in their Carnival Games booth for the school festival.[5]

Honda developed a crush on Miho Nosaka (manga). As his infatuation got to him, he let Jonouchi know and despite Honda's wishes, Jonouchi told Yugi and asked him for help. Yugi suggested that they browse his family's store for a present. Yugi's grandfather suggested a love letter jigsaw puzzle. Honda could write a love letter to Miho on it, for her to assemble when she receives it. Jonouchi laughed at the idea of Honda doing something like that. However Honda thought it was perfect and bought it. Having never sent a love letter before, he got Yugi to write one and threatened him, should Miho not like it.[4] 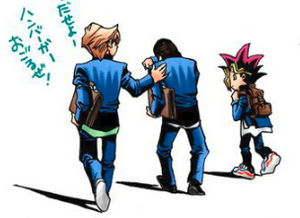 The next day at school, the teacher Ms. Chono found the puzzle on Miho's desk and confiscated it. As she found out it was a love letter, she read it to the class and offered the sender a chance to confess or face expulsion. Although owning up would still result in expulsion. Yugi claimed to have wrote it and Jonouchi claimed to have sent it, so Honda can still have a chance with Miho. However Honda also claimed it was from him. Chono continued the puzzle to find out who really sent it and planned to punish the others for lying. Dark Yugi emerged and turned the jigsaw into a Shadow Game, Dark Puzzle; as Chono continued to complete the puzzle, she felt the pain she was inflicting on others by doing it. The makeup on her face began to peel away, revealing her true ugly self. Chono then fleed the room, sparing the boys any trouble.[4]

After the incident, Honda plucked up the courage to ask Miho out directly, but she rejected him. Jonouchi then treated him to a hamburger to cheer him up and since then Honda became good friends with Yugi.[4]

Honda accompanied Jonouchi when he bought new top of the range shoes at the Junky Scorpion. Honda didn't see how such a fuss could be made out of shoes and tried to talk Jonouchi out of taking the store owner's test of putting his foot into a shoe, believed to have a scorpion in it. After leaving the shop, Honda, Jonouchi and Yugi were attacked from behind, by a gang who stole Jonouchi's shoes. They tracked down the gang afterwards. Jonouchi and Honda beat up the gang, who told them they were paid by the store owner. Dark Yugi played coin in sneaker with the store owner, resulting in Yugi returning to Jonouchi and Honda with the shoes, unaware of how he got them back.[6] 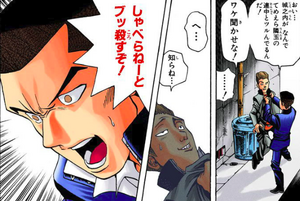 Honda started to worry when Jonouchi missed a day of school. Unable to recall Jonouchi ever missing school before, he suspected something was wrong. He, Yugi and Anzu investigated by visiting Jonouchi's apartment, but fled after Jonouchi's father yelled at them mistaking them for Jonouchi. They continued to search for Jonouchi and found him with Hirutani's gang, who were attacking someone outside the American Club. Afterwards Honda told Yugi and Anzu about Jonouchi's past with Hirutani and the three of them agreed that Jonouchi wouldn't have willingly rejoined the gang. Honda later interrogated one of the members into telling them why Jonouchi rejoined; He had been blackmailed, with Hirutani threatening to beat-up members of Jonouchi's class. Honda went to J'z in search of the gang, but found the place in a mess, with one unconscious member of the gang. Unable to get him to wake-up, Honda, Anzu and Yugi suspected Jonouchi was in trouble and split-up to find him. Honda later found Yugi tending to Jonouchi, after Dark Yugi defeated the gang in Landmine Search Network, unbeknownst to everyone else.[8][9]

As a favor to his sister, Honda takes his nephew Johji to the Kaiba Land. Here he meets with Yugi and Jonouchi and assists them in Death-T.

They meet Anzu at the start of Death-T 1, who had been hired at KaibaLand. Honda gets her to mind Johji, while he takes part in the first game, the Stardust Shootout. Using his sharpshooting skills, Honda takes charge. Since Kaiba rigged the game, Yugi and his friends laser guns were duds. But the staff were unaware Anzu was their friend, so she had been given a functional gun. Using her gun and hiding Johji on his back, Honda is able to take out the remaining opposition. In exchange for Johji's help, Honda had promised him a bath with Anzu, which she blatantly refuses.

Honda gets trapped in the Death-T 3 stage, after his coat gets caught under a falling block. After Dark Yugi rescues Mokuba Kaiba, from Seto Kaiba's artificial Penalty Game, Mokuba repays him, by saving Honda.

Honda arrives to cheer Yugi on in Death-T 5.

Honda, along with Yugi, Anzu and Jonouchi visit Ryo Bakura, to play Monster World. However, Bakura gets possessed by Dark Bakura, who turns the game into a Shadow Game.

Honda gets trapped in his piece, a magic gunman. His friends also get trapped inside pieces, while Dark Yugi leads them as the player. On their first encounter with Dark Master Zorc, Honda manages to shoot off one of his arms off. On a later encounter, Honda attacks Zorc, who has been weakened by the White Wizard Bakura, causing Zorc to turn into his final form.

After the game, Honda and his friends are returned to normal.

During the preliminaries, he cheers Yugi and Jonouchi on from the sidelines of their Duels.

As Yugi and Joey are about to enter the Duelist Kingdom finals, Saruwatari refuses Honda, Anzu and Bakura entry as they are not finalists. Jonouchi knocks out Saruwatari to let the others in.

The day before the finals, Honda asked Yugi to try and save the Kaiba brothers, remembering how Mokuba saved him during Death-T. Also, he went away to get Mokuba's body, but was caught by a guard. Later, Bakura arrived and freed him, then they left. Honda was acting suspicious about Bakura.

Honda cheered for Yugi and Joey from the sidelines during the final rounds.

He, along with Jonouchi, Anzu, and Sugoroku, tried looking for Yugi when he was lost in the Black Clown store, where he was actually playing D.D.M with Ryuji Otogi.

He, with Ryuji, went to the hospital to pick up Shizuka Kawai, Jonouchi's sister. He later cheered from the sidelines for Yugi and Jonouchi during the finals

Went Dark Yugi entered the world of memory to relieve his past, he went with Yugi, Jonouchi, Anzu, and Bobasa to the World of Memory, and witnessed Bobasa transforming into Hasan. He was tagging along with the group, and helped defeat Zorc Necrophades.

He witnessed the Ceremonial Battle, and said good-bye to Atem, before he passed on to the afterlife. 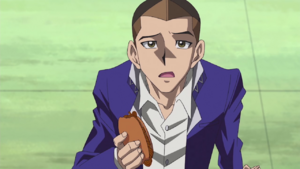 Hiroto Honda in The Dark Side of Dimensions