Sozoji, known as Fender Shrill in the English version of the Dungeon Dice Monsters video game, is a karaoke player who tries to get people to listen to his horrid singing.

He appears once in the Yu-Gi-Oh! manga 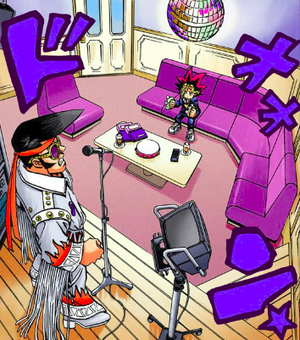 Yugi Mutou recalled a negative testimony from three boys, whom he labeled "Mr. A," "Mr. B," and "Mr. C", to express universal condemnation of Sozoji's music.[1] 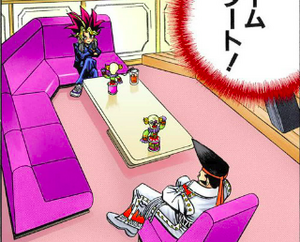 Yugi arrived at the show, not having sold any tickets. Sozoji then forced Yugi to listen to his music at a deafening volume and brought out Hanasaki, who was badly beaten, as the audience for the next act.[1]

Yugi switched to Dark Yugi, who challenged Sozoji to a Shadow Game for making Yugi and Hanasaki suffer. The silence game consisted of two Sound Pierrot toys, which dance when they detect sound. These were placed at opposite ends of a table in front of each player. The first one to cause their toy to dance loses. Sozoji noticed Dark Yugi's headphone jack balancing on a glass of water, and he excitedly anticipates it to fall and make noise. However, the sound of his increasingly pounding heart was amplified by the microphone in his hand, causing his toy to dance. As his Penalty Game, "Beat Festival", he was forced to listen to his deafening heartbeat.[1]