Goro Inogashira is a character in the Yu-Gi-Oh! manga. He was the senior class D festival committee president.

Goro's class served Hiroshima-style okonomiyaki for the school festival. When Anzu Mazaki's class won his class' favored spot at the festival in a raffle, he ordered his classmate's to tear down the Anzu's class' booth and claimed the spot. However Dark Yugi won it back by defeating Goro in the Shadow Game, Griddle Ice Hockey. 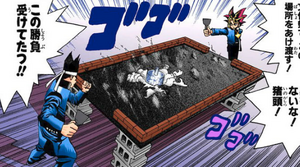 For three years, Inogashira's class cooked Hiroshima-style okonomiyaki for the school festival in the same spot. When he the first year class B took the spot, he demanded that they hand it over, although Anzu Mazaki protested that they won it fairly in the lottery. Katsuya Jonouchi tried to pick a fight with him but got stuck in his giant Bluebeard's Attack barrel. Goro punched Jonouchi hard in the face and ordered the rest of his class to tear up the other class' stand. Yugi Mutou tried to stand in their way, but was knocked down.[1] 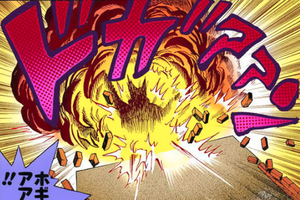 Dark Yugi called Goro to meet him at the festival spot in the middle of the night. Here Dark Yugi challenged him to a Shadow Game, Griddle Ice Hockey. They used the giant iron grill Goro's class were going to use for their cooking as an air hockey table with bricks forming the sides and a block of ice containing a tube of an explosive chemical as a puck. Goro dealt powerful blows to the puck, making it difficult for Dark Yugi to keep up. Dark Yugi, managed to nick the puck with his paddle, which had a sharp end as it was used for making the onmoyaki. This caused the ice to break with Goro's next blow and the chemical hit the hot surface, causing it to explode in front of Goro.[1]