Fuguta is a character in the Yu-Gi-Oh! anime. He is unnamed in the English version's dialogue, though is entitled as such in the English version's closed captions whenever he begins speaking his lines off-screen. On one occasion, Fuguta is mistakenly called Roland in voice dialogue.[2] He works for KaibaCorp and is often accompanied by Roland, both of whom are loyal to Seto Kaiba.

During Battle City, Fuguta and Roland stood in Domino Stadium to welcome the finalists as they arrived. When Seto Kaiba appeared, he ordered them to turn on the stadium lights. When Yugi Muto, Joey Wheeler, Mai Valentine, Téa Gardner, Tristan Taylor, Serenity Wheeler and Duke Devlin arrived, Roland confirmed Yugi, Joey and Mai had the required number of Locator Cards and Fuguta then gave them ID cards, instructed them to hold on to them at all times. He and Roland later tried to stop Téa, Tristan, Serenity and Duke boarding the Kaiba Craft 3 as they were not finalists. However Mokuba Kaiba said to let them on. Fuguta protested, but Mokuba appealed to Seto, who allowed it. After they boarded, Kaiba ordered the blimp to take off, despite Fuguta and Roland pointing out the last finalist had not yet arrived. Ishizu Ishtar arrived in time to be the eighth finalist and Fuguta confirmed that she had enough locator cards. He and Roland later tried to inform Kaiba of Ishizu's arrival, but Mokuba warned them not to interrupt him while he was preparing for his Duels.[2]

As the lottery to determine the pairings for the first Duel of the quarter finals was about to begin, Fuguta informed Ishizu that her presence was required. However Ishizu insisted that she was not needed as she knew she would be taking part in the fourth Duel.[3]

When Dartz took control of KaibaCorp, Seto told Roland that he was no longer his boss after Roland referred to him as "sir" (In the Japanese version, he called him Seto-sama). However Fuguta insisted that he would stand by Seto's side until he was back in control of KaibaCorp and Roland agreed, indicating the two's shared loyalty to Seto.[4] 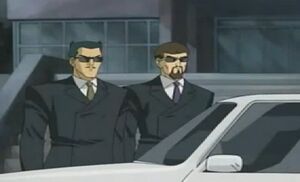 Roland and Fuguta in Yu-Gi-Oh! GX

He and Roland greeted Sartorius and escorted him to a meeting with Kaiba.[6]