From Yugipedia
Jump to: navigation, search
For the manga version of this character, see Esper Roba (manga).

Espa Roba, known as Esper Roba in the Japanese version, is a Duelist who claims to have ESP. In reality he is a fraud who uses his younger brothers to spy on and reply back to him the cards in his opponent's hand, thus allowing him to 'predict' the opponent's strategies almost before they perform them.

In the Singaporean English dub of the anime, Espa Roba has a Spanish accent.

Both his English and Japanese names are derived from extrasensory perception, or ESP for short. 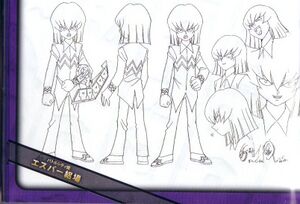 Espa made his first appearance in a cameo in Battle City and has made several ever since.

Espa was a young Duelist who entered Battle City to uphold his reputation and protect his younger brothers. He was first shown defeating Rex Raptor and taking "Serpent Night Dragon". Rex advised Joey Wheeler not to Duel Espa on the grounds that his psychic abilities allowed him to read all the cards in his hand. With an air of self-confidence, Joey accepted the Duel. 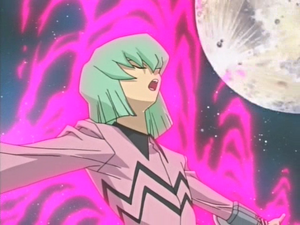 Espa pretending to have a psychic vision.

Although Espa initially gained an advantage due to the fact he knew what cards were in Joey's hand and on his field, Joey inferred what was happening and attempted to confuse his watchers from above by putting the cards "Skull Dice" and "Graceful Dice" close to each other.

Mokuba Kaiba eventually discovered the source of Espa's "psychic" abilities; his brothers spied upon Joey's hand from upon a high rise building. However, the brothers pleaded with Mokuba to let Espa continue with the Duel, stating that he was a strong Duelist despite his cheating ways.

The psychic front was to build an impression of an unbeatable Duelist and thus deflected any abuse that was usually heaped upon Espa and his brothers, they were heavily bullied due to being carnival folk before. To Mokuba, this situation paralleled his brotherly relationship with his older brother, Seto and he let Espa continue the Duel. Due to this, Espa's psychic reputation was tarnished, but he continued his Duel with Joey nevertheless. 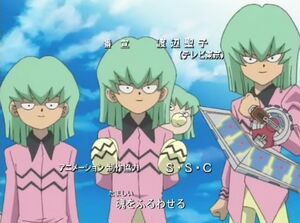 Espa appearing to challenge Mako Tsunami to a Duel

Espa eventually Summoned "Jinzo", who severely crippled Joey's overall strategy. Finally, Joey activated "Roulette Spider" which forced "Jinzo" to attack a random card on the field, "Jinzo" attacked "Reflect Bounder", who then reflected the assault back on "Jinzo", destroying them both, causing Espa to lose the Duel.

Due to the Battle City regulations, Espa forfeited his rarest card, "Jinzo", to Joey upon his defeat and commented that he was ready to stand up for his brothers without cheating.

He was later seen observing the semifinal match between Yugi and Kaiba in Domino City amongst other Duelists.

Espa made a cameo in the Japanese epilogue, appearing to challenge Mako Tsunami to a Duel.

In Yu-Gi-Oh! 5D's, a parody of him named Esper Rouba is listed as one the Duelists defeated by Hunter Pace.[1]

Espa Roba plays a Psycho Deck, relying on Machine-Type monsters and Magic and Trap cards that allow him to manipulate enemy monsters. His key card is "Jinzo", which he strengthens with "Amplifier".