From Yugipedia
Jump to: navigation, search
For other versions of this character, see Mako Tsunami (disambiguation).

Mako Tsunami, known as Ryota Kajiki in the manga and Japanese versions, is a fisherman who wants to become the greatest fisherman ever in honor of his father, who died on a shipwreck (in the dub, Mako is searching for his long-lost father, who survived the shipwreck, indicated by a missing lifeboat). He uses mostly WATER-based cards in his Duel Monsters Deck. He came third in the Regional Duel Monsters Championship (Japanese National Duel Monsters Championship in the Japanese version).

Kajikimagurō means "Swordfish". His English anime name, Mako, originates from the "Mako Shark", and a "Tsunami" is a type of large wave formed by earthquakes or volcanic eruptions. 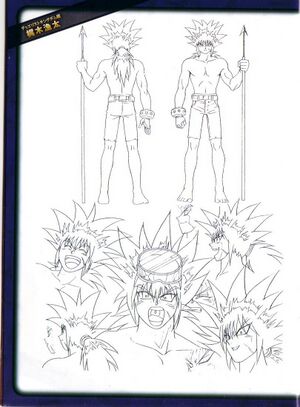 Mako's first appearance is in the Duelist Kingdom arc, where he Duels Yugi Muto in a battleground near the sea. Due to the fact that his side of the field was water, all of his monsters gained power bonuses and they were able to hide themselves from attack. Therefore, Mako's monsters were able to devastate Yugi's monsters until Yugi played "Full Moon" to increase the ATK of his "Silver Fang". From here, he shattered the moon with "Giant Solder of Stone", draining the sea and exposing Mako's monsters. From here, he played "Curse of Dragon" which in combination with the "Burning Land" card, incinerated Mako's monsters and won Yugi the Duel. 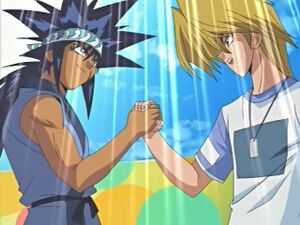 Mako congratulating Joey on his victory 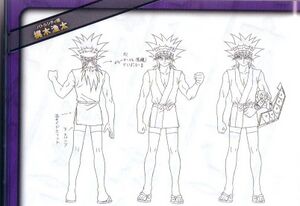 His next appearance in the series is during the Battle City arc. It showed him trying to catch fish in the killer whale tank at Domino City Aquarium, where he was chewed out by the Domino City Aquarium worker, the killer whale's trainer. When the worker was too ill to perform the scheduled show, Mako volunteered to take her place, due to his bond with all sea creatures.

He was found at the show by Joey Wheeler who he Duels to determine which one of them will go to the playoffs. Using the Field Magic Card "Umi", Mako gains offensive and defensive bonuses for his monsters as well as hiding them. Eventually, Mako calls forth his "The Legendary Fisherman", who is immune to Magic Cards and monster assaults as long as "Umi" is on the field. To Mako, "The Legendary Fisherman" is the embodiment of his father and also what he aspires to be in life. Mako then Summons "Fortress Whale", whose power allows him to dominate the field. Joey eventually uses "Panther Warrior" in conjunction with the Equip Magic Card "Lightning Blade" in order to weaken the "Fortress Whale" as well as increase the power of the "Panther Warrior". Mako then used his "Legendary Fisherman" as a shield to protect his Life Points but with the removal of "Umi" via Joey's "Giant Trunade", it was easily destroyed, winning Joey the Duel. Joey won his "Fortress Whale", and Mako gave his "The Legendary Fisherman" to Joey as well to thank Joey. This is Mako's final Duel in the series. Mako was also the only Duelist Joey faced in tournament apart from Seto Kaiba that didn't cheat or twist the game to their own will.

Mako is shortly seen along with the rest of the Duelists during the semifinal match between Seto Kaiba and Yugi Muto, in which he marvels at the power of the Egyptian Gods "Obelisk the Tormentor" and "Slifer the Sky Dragon". 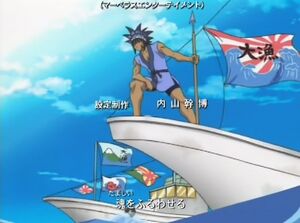 Mako is seen on a boat in the final episode.

In the final episode, Mako is seen on a boat that has a sail that reads "Tairyō" (大漁), which means a large catch of fish. When Kajiki arrives on shore, he encounters the Roba brothers, with Espa Roba ready to Duel. This scene is shown only in the original anime as it takes place during the credits.

Mako also makes a cameo in Yu-Gi-Oh! The Movie: Pyramid of Light watching the news of Yugi being the champion on TV, as well as a montage created by Maximillion Pegasus shortly before the final Duel when Pegasus says that everyone Yugi and the Pharaoh met had played a role in what was coming up next.

Mako uses a WATER Deck in Duelist Kingdom it is focused on using the "natural environment" to hide his strong WATER monsters. In the "Battle City" tournament, it is focused around utilizing "Umi" to conceal his monsters while also using cards such as "Tornado Wall" and "Torrential Tribute" to disrupt his opponent's strategies. He also uses this strategy to gather enough resources for his more powerful monsters such as "The Legendary Fisherman" and "Fortress Whale".