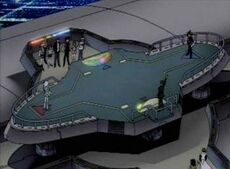 The Stratos Dueling Arena was the location of the Battle City quarter-finals. It was a raised platform on top of Kaiba Craft 3.

Since the blimp flew at 4000 feet, the arena is quite dangerous because of strong winds. Kaiba believed worthy Duelists should be able to withstand such harsh conditions necessary, and any finalists who couldn't take it didn't belong there.

The dangers caused problems for Joey, whose cards nearly blew off the edge of the blimp, and Tristan and Duke who toppled over the side in a fight, but were rescued by Shadi, while dangling from the edge.