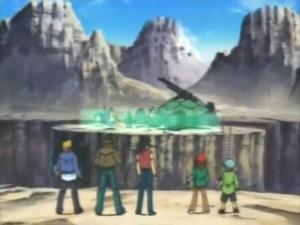 Death Valley is a location in the desert, about an hour away from where Arthur Hawkins lived.[1]

The valley has a canyon, with a mesa inside it. There used to be a suspension bridge connecting the mesa to outside the canyon, but it was cut down by Rafael.[2]

After the kidnapping of Arthur Hawkins, Rafael left Yami Yugi a note saying to meet him alone at Death Valley. Rebecca Hawkins found this note and passed it on to Yugi Muto. Yugi borrowed Rebecca's horse Copernicus to get there as Yami.[1]

Rafael was waiting for Yami in the mesa. Once Yami crossed the bridge, Rafael threw a pair of axes past him, cutting the ropes on the suspension bridge.[2]

Rafael gave Yami "The Seal of Orichalcos" during the Duel, hoping to prove Yami was evil. Despite Yugi's objections, Yami played the card, seeing no other way to win.[3] However Rafael still went on to win the Duel. Since the Seal only takes one soul, Yugi let it take his in order to spare Yami.[4]

Rafael got off the mesa by grabbing onto a rope, thrown from a helicopter. He carried Yami's body with him, but threw it down after they crossed the canyon.[4]