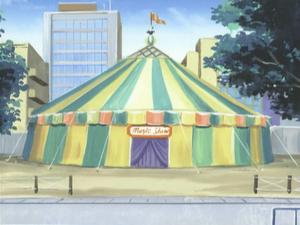 The Magic Show tent was a marquee in Domino City in the Yu-Gi-Oh! anime.

The tent was used as a means of luring Yami Yugi into the RPG Hobby Trading Cards store to Duel Arkana. The tent did not feature in the manga, wherein Yami went to the store on his own initiative upon suspecting it was a front for the Rare Hunters.

In the English dub, the text "Magic Show" is erased from the outside of the tent. However it remains on the sign inside the tent.

A harlequin appeared before Yami Yugi and gestured that he was to enter the tent. Yami wondered if the harlequin was a Rare Hunter and went inside. There he saw the harlequin again inside a magic box, as it gestured for him to come inside, before disappearing into its confined shadows. Yami went into the box, which was then engulfed in a cloud of smoke, before collapsing revealing Yami had disappeared. This was witnessed by Téa Gardner and Solomon Muto, who were following Yami, unable to get his attention.[1]

Yami was transported from the tent to the RPG Hobby Trading Cards shop, where he was then led by Arkana to Arkana's room, the basement Duel chamber, where KaibaCorp could not trace his Duel Disk signal.[1]