"The Lurking Duelists" is the eighty-eighth chapter of the Yu-Gi-Oh! manga. In its first English printing, it was numbered as the twenty-ninth chapter of Yu-Gi-Oh! Duelist. In the 3-in-1 edition, its number was changed to match the original Japanese printing.

Kaiba reaches Pegasus Castle, but is refused permission to see Pegasus without 10 Star Chips. While Yugi and Jonouchi prepare for their second day of the tournament, they are spied on by Bandit Keith and his goons.

AT 2:30 am, Kaiba arrives at the foot of the stairway to Pegasus Castle, while at the top, Saruwatari and another guard discuss the helicopter that Kaiba was being transported in. The other guard tells Saruwatari that they had lost contact with the pilot. Surprised, Saruwatari asks if it had crashed into the sea, but the other replies that it could not have, since the radio is still transmitting, although the pilot is not responding. With that in mind, Saruwatari recalls hearing a helicopter earlier. Before they can discuss the matter any further, Kaiba appears before the two of them demanding to see Pegasus. 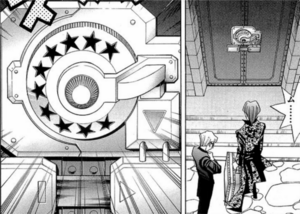 Croquet shows Kaiba to the gate.

The doors behind the two guards opens and Croquet emerges. He applauds Kaiba, and say they had not been expecting him this late. Kaiba sarcastically apologizes for not letting their spies kill him. Croquet invites him inside and the two make their way to the castle. He starts to talk about how this must be Kaiba's second time on the island, but Kaiba insists that he stop the chit-chat. He declares that he knows they have kidnapped Mokuba and demands to know where he is. Croquet pretends to take time to remember who Mokuba is and tries to politely deny kidnapping him. Kaiba is unconvinced and yells that Croquet is a waste of time. Croquet simply recommends that he speak with Pegasus, which is currently impossible as it is 3 am. He suggests getting Kaiba a room and letting him speak to Pegasus tomorrow. Kaiba is unwilling and seizes Croquet by the collar, telling him that he wants to see Pegasus now. Croquet smiles and says he understands. He shows Kaiba a gate, sealed with a large padlock, containing star-shaped holes and says that Pegasus is behind it and Kaiba may see him if he can open the gate. He explains that the door may only be opened by inserting 10 Star Chips, so only those who survive the Duels may pass and Kaiba is no exception. Instead he invites Kaiba to a room in the annex.

At 9:30 am, Jonouchi wakes up, having had a bad dream about his Duel with Kaiba. In the dream, he drew another weak card, which could not stand up to the "Blue-Eyes White Dragon". Kaiba laughs that Jonouchi is a worthless dog, who will be afraid to ever Duel again and calls him a loser. After realizing it was just a dream, he looks over at Yugi. Since Yugi has been defeating tough opponents without even flinching, Jonouchi sees no reason, he should be afraid himself.

Jonouchi calls the others to wake up. Bakura wonders if Kaiba made it to the castle last night. As Yugi ponders on that, Anzu comes over and Yugi asks her where Mai went, referring to her as "Miss Shiranui". Anzu replies that Mai was gone when she woke up, but had left the tent and enough food for all of them. Anzu then hands Yugi a note Mai left, which said that she owed him eight Star Chips.

As the group go in search of more duelists, Yugi notes that twelve of the forty participants were sent home yesterday. Between that and Player Killers targeting more in the night, he reckons half the participants are disqualified at this stage. Honda advises Jonouchi to be careful on finding more opponents to get six more chips off, without losing his current ones. Although they have a day left, Yugi says they cannot take long, as it is all over once four Duelists make it to the castle. Since the remaining Duelists are the ones who survived the first day, Yugi deduces that they are the stronger duelists. Honda smirks that Yugi is scaring Jonouchi with the talk of stronger Duelists. Jonouchi immediately seizes Honda asking who he is calling scared. He then vows to take down whatever enemy stands in his way.

Nearby Ghost Kozuka and Satake spy on the group. Kozuka suggests that they go after them, but upon inspection Satake finds out only two of them are duelists. He then realizes that one of them is Yugi. The two of them decide to tell Keith about this before doing anything.

The two of them rush over to Keith, who is telling Takaido about how he won a prize before. Kozuka and Satake report that they found two duelists. Kozuka suggests that they had better leave them alone, since one of them is Yugi, whom they might not be able to beat. Keith says that he has never heard of Yugi, but Satake tells him that he is the one who beat Kaiba and they are saying that he is likely to get to the castle. Keith asks who are saying that and remarks that he does not care if this person is Yugi or anyone else, the four of them are going to the castle. Takaido agrees and says that they are lucky to have met him. With a real pro-duelist on their side, they should storm the castle. Keith nods reassuringly and starts to take off his sunglasses, telling them that they will have nothing to worry about if they just listen to Bandit Keith. As the other three celebrate, Keith looks on at the castle vowing to get revenge on Pegasus for humiliating him on national TV. He sticks back on his glasses and says to himself that he will get these guys to win his Star Chips, so he can make it to the castle without soiling his hands.

Keith asks about the duelist accompanying Yugi. Satake informs him that the other guy looks like an amateur. Keith suggests that they separate him from the others, by taking him to the hole. The others are unfamiliar with this hole. Keith tells them that he found an entrance to caves under the island, which contains a Duel Box, like a hidden stage in a video game. The island was occupied by the military during the war. They buried their troops under the island. Like the other different terrains on the island, Keith explains that there is a Graveyard Field under the island. 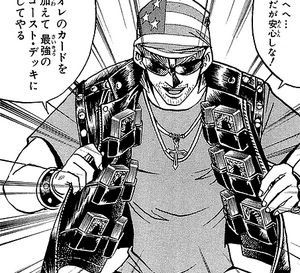 Since Kozuka has a Zombie Deck, Keith suggests that they get him to Duel Jonouchi in the crypt. Kozuka is happy to do so, but Keith takes a look at his Deck beforehand. Unsatisfied with its contents, Keith opens his coat, revealing bunches of hidden cards. By lending Kozuka some of them, they'll turn his Deck into the ultimate Zombie Deck. Takaido states that their success so far has been due to the cards that Keith has been lending them. Keith does not care that the tournament rules only allow players to have forty cards, since nobody is counting and he is not officially in the tournament himself. 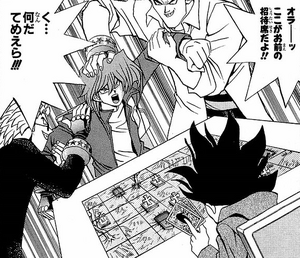 While Yugi, Jonouchi and their friends search for opponents, Jonouchi takes a break to urinate. Once he is done, Kozuka, Takaido and Satake sneak up and grab him. They drag him into the caves where Keith is waiting. Satake and Takaido stick Jonouchi into the Battle Box across from Kozuka. Kozuka welcomes him to the crypt and says his Zombies will make it Jonouchi's grave.

Outside, Yugi, Honda and Anzu wonder what is keeping Jonouchi.

The parts of this chapter concerning Jonouchi (known as Joey Wheeler in the English anime), his friends and Bandit Keith's gang are covered in episode 17 of the anime. Differences included:

The following cards appeared in this chapter.