"Enter the Labyrinth!", known as "Attack of the Labyrinth! in the Japanese version, is the ninety-second chapter of the Yu-Gi-Oh! manga. In its first English printing, it was numbered as the thirty-third chapter of Yu-Gi-Oh! Duelist. In the 3-in-1 edition, its number was changed to match the original Japanese printing.

Before Yugi, Jonouchi, Anzu, Honda and Bakura can leave the underground, Bandit Keith has his goons lock them in the tunnels, by rolling a boulder in front of the entrance. The groups search for another way out takes them to the Meikyû Brothers, whom Yugi and Jonouchi Duel in order to escape and gain spots in the finals.

Jonouchi's friends congratulate him on his victory against Ghost Kozuka. Anzu says it sounds like it went great, while Jonouchi boasts about his "one-shot deadly combo". Honda raises concern about Jonouchi's streak of good luck since coming to the island and wonders if he has used up his life's worth of good luck. While Jonouchi argues with Honda, Dark Yugi thinks that Jonouchi's wins cannot be put down to something as simple as luck or miracles and assumes it his desperation to win and concern for his burdens; the true strength of a Duelist.

As Bandit Keith, Kozuka, Takaido and Satake leave, Jonouchi calls after Bandit Keith. On hearing his name, Jonouchi's friends recognize him as the prize hunter, who was famous in America. Honda worries that Jonouchi picked a fight with him, but Jonouchi explains that he did not except a challenge from them, but they abducted and dragged him into the cave, like hyenas chasing their prey, and even punched him once. He suggests that Keith play fair next time, if he calls himself a Duelist. Keith swears at Jonouchi, demanding that he not tell him how to play. He believes card games are about outwitting your opponent and that starts even before the game. He asks if Jonouchi is faking it and advises that he stop pretending to be a nice guy, after which prizes and glory will come his way. To demonstrate, he opens his jacket, revealing the inside to be filled with Decks. He explains that he has all kinds of Decks, each with dozens of rare cards, ensuring he has one to beat anyone who faces him. Dark Yugi asks Keith was there not a rule saying each player could only bring forty cards to the island. Anzu agrees and says that players were allowed to trade cards on the boat, but once they got to the island, their Decks were checked and extra cards were confiscated. Keith replies that he is not officially in the tournament, so the rules should not apply to him. He states that he has only one rule, and that is to do whatever it takes to get to Pegasus Castle. As Keith leaves, Dark Yugi tells him that Duelists' pride is the rule on the island, but Keith tells him not to make him laugh. Jonouchi wants to threaten to beat Keith, but thinks Keith is too strong for him presently, so he needs to focus on getting stronger for now.

Jonouchi points out that he and Dark Yugi now have eight and six Star Chips, respectively and they agree to make it ten each after their next Duels. 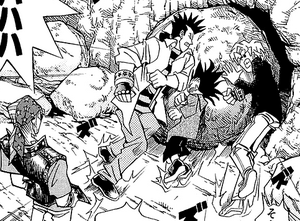 Keith gets his his accomplices to block the exit with a boulder.

As Dark Yugi, Jonouchi, Anzu, Honda and Bakura make their way to the cave exit, they see a boulder starting to block it. Outside, Keith has Kozuka, Takaido and Satake pushing the boulder in place and laughs that the others will be trapped down their forever. He peers inside the gap before it is fully closed and tells them that if it is the "law of the island" to win Duels, then it is his law to win like this. Now that he is close to the castle, he says that they are just in his way, so they can stay there in that "grave". He assures them that somebody will find them eventually, but it could take a few years. Jonouchi decides to say what he refrained from saying earlier and threatens to beat Keith. 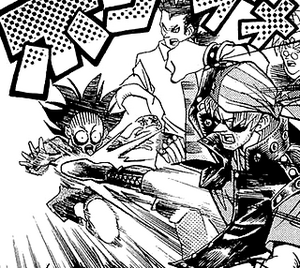 Keith turns on his companions.

Outside, Kozuka, Takaido and Satake are now out of breath and Kozuka wonders if they went too far. Keith laughs and announces that he is moving on to his next order of business. He proceeds to kick Kozuka in the stomach and tells him off for losing to a beginner. Kozuka pleads that he only played the cards Keith told him to. However, Keith kicks him the face and asks why he lost in that case. As Kozuka lies in pain, Keith spits on him and comments that without his Star Chips, he is useless and should just die. He then turns to Takaido and Satake and asks how many Star Chips they have. They both nervously reply that they have five each. Keith remarks that that is just enough for one and declares that he shall take them. Takaido and Satake are reluctant at first, but Keith angrily insists that he is the only reason they have gotten this far and demands that they hand them over. They both do so and Keith asks them for one of their Duel Gloves too. Keith looks at his Star Chips and thinks to himself that he has now earned ten, without soiling his hands in a single Duel. He anticipates getting to Pegasus, keeping in mind how Pegasus humiliated him. He then beats up Takaido and Satake and becomes the first participant to advance to the castle.

Inside the cave, Yugi, Jonouchi, Honda and Bakura unsuccessfully try to move the boulder. Looking back into the cave, they see two passages and know that the one on the left goes back to the Battle Box. Bakura notes that if they were on the surface, the right passage would lead them to Pegasus Castle. Anzu is impressed and begins to compliment his sense of direction, before realizing that he was using the Millennium Ring, which is pointing in the direction of Pegasus' Millennium Eye. Dark Yugi curiously looks at Bakura, whose eyes look a bit strange, while he holds the Ring. Using the lantern that Mai Kujaku left them, Honda leads the group into the right passage, thinking that they should be fine as long as the Ring keeps working. 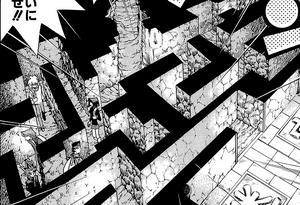 After walking for a while, Jonouchi notices the tunnel is getting thinner and the walls are getting smoother. They then notice they have entered a maze, which eventually leads them to a dungeon. 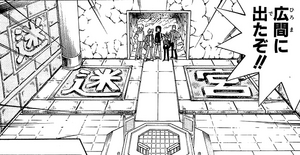 Two men do a number of backflips and land before the group. Jonouchi compares them to something from a Hong Kong film and they introduce themselves as the Meikyû Brothers, the guardians of the dungeon. Dark Yugi notices that they are wearing Duel Gloves and wonders if they are Player Killers. The brothers ask if they have come to find the right path and explain that to find the answer they will need to face them in a Duel. Dark Yugi notices that the Duel Table has two miniature doors, just like the actual doors in the room they are in. The brothers ask for two Duelists to step forward to face them in a Duel. Meikyû the Younger says that if the others can beat them, they will learn the right way. Meikyû the Elder adds that if they run, they will be lost forever.

Dark Yugi and Jonouchi accept the Duel and are asked to the brothers signal to the Duel Table, telling them to enter the Labyrinth Field. Dark Yugi wonders where the labyrinth is, if the table is considered to be the Labyrinth Field. He notes that there are two doors, labeled "Mei" and "Kŷu", each guarded by one of the brothers, and one of which leads to the surface. Jonouchi wages two Star Chips and Dark Yugi wagers four. Dark Yugi reminds Jonouchi that if they win this, they will each be qualified to enter the castle. The brothers grin and think he is being too optimistic, since they being the Player Killers of the Labyrinth, have orders from Pegasus to make sure their journey ends there.

The Duel begins and Meikyû the Younger plays "Labyrinth Wall", causing walls to form throughout the field, creating a maze.