"Second Stage", titled "Second Game" (２の Dai Ni no Gēmu) in the Japanese version, is the eighteenth chapter of the Yu-Gi-Oh! manga.

Shadi subjects Dark Yugi to the second stage of their Shadow Game. Yugi must solve a puzzle, while grasped by an illusion of Ammit.

Dark Yugi continues Shadow Game with Shadi. A portion of the floor has just collapsed, revealing a hole, with two large glowing eyes inside. Yugi realizes that whatever is down there is trying to make its way up, so he turns to run. Yugi's not quick enough, as two hands emerge and grab him by the arms. The rest of the crocodile-like monster, Ammit, emerges and opens her mouth over Yugi. Shadi explains that this is the second stage of their game, "Concentration or Death" and the only way for Yugi to escape Ammit's clutches is to win. 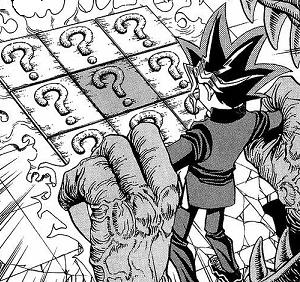 Dark Yugi faces the puzzle, while held by Ammit.

Yugi suspects Ammit is another one of Shadi's illusions. Shadi confirms that he is correct, but illusion or not, if Yugi feels her bite, he will die. Shadi says that her last meal was Curator Kanekura, not so long ago, so she must still be ravenous. For Yugi to survive, he must clear the stage, causing the illusion to vanish, Shadi informs him.

A 3x3 grid of stone plates labeled with question marks appear before Yugi, and Shadi begins to explain the rules. He compares the tablets to the game concentration, where players attempt to find matching cards on a surface of face-down cards, by turning over two at a time. Yugi spots a problem; such a game would require an even number of plates, but there are nine in this game. Shadi smirks that he's right and says that there is an extra plate in the middle and Yugi must name the picture on it. He doesn't need to match the other pairs, Shadi continues, however he is not allowed to turn over any of the nine plates. Shadi gives Yugi fives minutes to solve the puzzle before Ammit closes her jaws on him. Yugi starts to worry. Shadi laughs and gives him a hint to the puzzle; the plates are a mirror of Ammit.

The game starts and Yugi tries to concentrate, but thinks there are too few clues. He finds it hard to think straight as he is too scared. One of the ushebti starts to crack. Remembering that if shows weakness, the ushebti supporting Anzu will break, he vows to save her, even it costs his life and promises that he'll solve the puzzle no matter what. 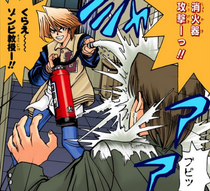 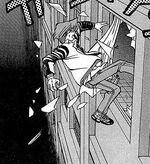 Jonouchi gets knocked out the window.

Unarmed, Jonouchi resorts to punching the Yoshimori. The professor takes the blow, seizes Jonouchi by the collar and pushes him towards the window. Jonouchi protests that they're on the third floor, but is shoved through the glass.

Outside the window, Jonouchi grabs onto the curtain to save himself from falling. However the curtain starts to come off its rail, unable to support him. Jonouchi swings into the wall managing to stand on a ledge, as the curtain falls.

Overhead, Jonouchi sees Anzu standing on the board over the side of the building. He wonders what she is doing there, but is interrupted, by the zombie professor, who is now climbing out the window.

the plates turn over, as Yugi solves the puzzle.

Yugi has one minute left to solve the puzzle. He fears that at this rate, both he and Anzu are doomed. He runs the puzzle by himself again; there are nine plates, the one in the middle is the puzzle and all of them are a mirror of Ammit. A mirror reflects a person's form and since this is a game of concentration, he deduces that, eight of the plates represent 4 pairs of things Ammit has and the remaining one is something she has only one of. He quickly checks; there are two ears, eyes, nostrils and hands on the monster. Shadi announces that there are five seconds left. Yugi thinks about what the monster has only one of and on the last second, calls out that the answer is "mouth". The pieces of the puzzle turn over, revealing the body parts Yugi mentioned, with the mouth in the middle. With that, Ammit, the plates and the holes in the floor all vanish.

Shadi congratulates Yugi on passing the second stage of his game, but now is the final stage, which will be much more difficult than the ones so far.