"The Secret Weapon", known as "New Weapon Capability!!" in the Japanese version, is the eighty-sixth chapter of the Yu-Gi-Oh! manga. In its first English printing, it was numbered as the twenty-seventh chapter of Yu-Gi-Oh! Duelist. In the 3-in-1 edition, its number was changed to match the original Japanese printing.

Jonouchi and Kaiba have just begun their Duel using Duel Disks. Jonouchi has just Summoned "Armored Lizard" to counter Kaiba's "Battle Ox". Yugi, Anzu, Honda, Bakura and Mai watch the Duel and are impressed by how lifelike the monsters are.

Kaiba thinks to himself that the Duel Disks are his secret weapon that will defeat Pegasus. Having seen Pegasus read the minds of his opponents from across the table, Kaiba concluded that the only way to beat him is to stay out of range.

Yugi wonders how the spinning disk makes the monster appear. Kaiba explains that the Duel Disk has a V-2 emulator and can hold as many as five cards. Its hyper 3-D engine creates Solid Vision using data from the microchips in the cards. Jonouchi does not fully understand the explanation, but comments that it is like fighting instant cup ramen. 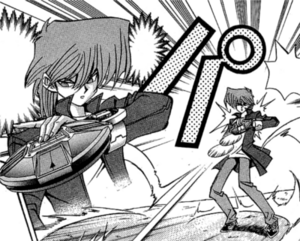 Jonouchi realizes the Duel Disk is like a yo-yo.

"Battle Ox" and "Armored Lizard" engage in battle, with "Battle Ox" plunging its axe into the neck of "Armored Lizard". Although the attack hit, Jonouchi says that the lizard is still alive as the axe was unable to fully cut through the armor scales. Kaiba insists that that does not matter, since "Battle Ox" has more ATK. "Battle Ox" raises its axe, carrying "Armored Lizard" with it and then slams it back on the ground, this time fully penetrating the armor and decapitating the lizard, destroying it and dropping Jonouchi's Life Points to 1800. The "Armored Lizard" card is then ejected from the Duel Disk, leaving Jonouchi chase after it. Yugi shouts at him to pick it up later, while Anzu looks away embarrassed, calling Jonouchi a "cheapo". Kaiba explains that when a monster loses, its controller is to jerk the wire on their Duel Disk to pull the disk back to them. Jonouchi does so and realizes the Duel Disk is like a yo-yo, which he considers himself to be good at using.

Anzu urges Jonouchi not to give up and Honda wonders if there is any way Jonouchi can beat Kaiba. Kaiba smirks and says that he presumes Jonouchi is the world's worst Duelist. He says that their special Duel is more like an exhibition and tells Jonouchi should not worry as he will not take his Star Chips, but he will shatter his confidence until nothing remains.

On Kaiba's turn, he announces that he is playing two cards to power up "Battle Ox" and will show Jonouchi the difference in skill between the two players. He uses "Polymerization" to fuse "Mystic Horseman" with "Battle Ox". Kaiba says that the two cards are from Greek myths, the Minotaur and centaur, and combines them to get the "Rabid Horseman". The increased speed raises its ATK and DEF. Yugi sees that with the Duel Disk, it is easier for Kaiba to make combos and has added Fusion combos to his Deck. 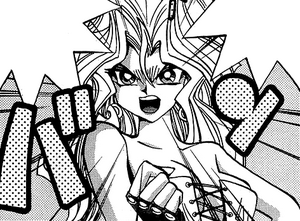 Mai orders Jonouchi to stand up and fight.

Jonouchi Summons "Swamp Battleguard", However, it is destroyed by the "Rabid Horseman". Over the next few turns, Jonouchi Summons more monsters, including "Axe Raider", "Battle Steer" and "Rock Ogre Grotto #1", until he has only 550 Life Points left. Kaiba laughs and suggests that Jonouchi give up. Jonouchi drops to one knee and thinks that he cannot win. His friends encourage him to continue and without thinking, Mai shouts at him, asking is he not ashamed and tells him to stand up and fight; she does not want to see him like this. She then gasps and puts her hand on her mouth, wondering what she did that for. Jonouchi tells her to shut up and says he does not want to hear from her. 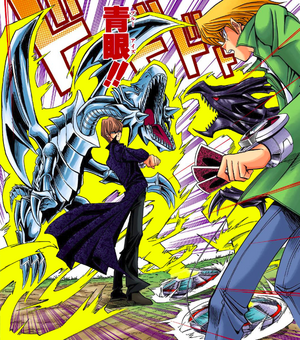 Jonouchi continues the Duel and draws "Red-Eyes Black Dragon", which he Summons. Kaiba is somewhat surprised to see this card. Yugi thinks that even though it uses a Fire attack, "Red-Eyes" its should still be able to win as it is much stronger. Using its "Black Fire Bullet" attack, "Red-Eyes" attacks and destroys "Rabid Horseman", dropping Kaiba's Life Points to 1600. Jonouchi's friends cheer and Kaiba says that he guesses that counts a scratch. Now much more confident, Jonouchi asks Kaiba how he likes that, but Kaiba mocks him for being so happy over winning just one turn.

On Kaiba's next turn, he said that he had been saving a card that could beat Jonouchi's anytime; a card that Yugi had gotten back for him. He Summons "Blue-Eyes White Dragon", which uses its "Burst Stream of Destruction" attack to destroy "Red-Eyes". Jonouchi is knocked over by the blast and his Life Points drop to 0. His friends rush over to see that he is okay and Kaiba asks Yugi if he sees now that he is the one who is going to beat Pegasus.