"Deathtrap Dungeon!", known as "Deathmatch!! The Labyrinth's Unknown Trap!!" in the Japanese version, is the ninety-third chapter of the Yu-Gi-Oh! manga. In its first English printing, it was numbered as the thirty-fourth chapter of Yu-Gi-Oh! Duelist. In the 3-in-1 edition, its number was changed to match the original Japanese printing.

The Labyrinth Duel between the team of Dark Yugi and Jonouchi and the Meikyû Brothers begins with the Duelists trapped within the "Labyrinth Wall" while "Wall Shadow" decimates their monsters.

Dark Yugi and Jonouchi have just begun their Tag Duel against the Meikyû Brothers and Meikyû the Younger has just used "Labyrinth Wall" to transform the field into a labyrinth. If Dark Yugi and Jonouchi lose, they will be trapped in the dungeon, until Pegasus decides to let them out, which Dark Yugi thinks could be never.

At the end of his turn, Meikyû the Younger takes time to explain the new rules: Each player has 2000 Life Points, but if one player loses all their Life Points, their teammate will lose too. Jonouchi worries that if he loses, he will never be able to face Yugi again. The order of play is Meikyû the Younger, Dark Yugi, Meikyû the Elder, Jonouchi. The brothers compare monsters to chess pieces and explain that if they are in Attack Mode, they can move a number of squares into the maze, equal to their Level. If the brothers are defeated, Dark Yugi and Jonouchi must then choose one of two doors, "Mei", the door of deception or "Kŷu", the door of the palace, only one of which will lead to the surface.

Jonouchi gets annoyed by the brothers antics. He points out that even if they win the Duel, they only have a 50-50 chance of choosing the right door, while their lives are at stake. In order to give them a chance, the brothers say that from now, one of them will always tell the truth and one will always lie. Dark Yugi says that that much had better be the truth. Meikyû the Younger replies that it is of course, but Dark Yugi seems skeptical. Each brother then goes on to claim that they are guarding the correct door.

While Jonouchi wonders which of the brothers is telling the truth, he remembers hearing a similar riddle. In the riddle, a man stood at crossroads, leading to Honest Town and Liar Town. There he met a villager, but did not know which of the two villages, he was from. The man wanted to go to honest town, but was only permitted to ask one question. The solution to the riddle was that he ask the villager to take him to his village. If the villager is from Honest Town, he should be honest and take the man there. If the villager is from Liar Town, he should lie and take the man to Honest Town.

Jonouchi insists that the brothers must answer their questions and they agree to answer one question from each of them. Jonouchi asked that the brothers direct him to their own door, thinking that they should each point to the same door, making it clear which one is the liar. Each of the brothers pointed to the "Kŷu" door, leading Jonouchi to deduce that Meikyû the Elder is the liar.

Jonouchi notices that Dark Yugi is still unsure and asks him what is wrong. He thinks that Jonouchi's solution was logically correct, but wonders if they can really take the brothers words at face value. He thinks it is too dangerous to compare their situation to the Honest Town riddle. Unlike the riddle, they are faced with two "villagers" and their claim that one always tells the truth, while the other always lies is suspicious, since if one is indeed a liar, both of them should claim to be honest. He considers the possibilities that both are liars and that there is no "town" at the end of the road, but rather a "cliff". He decides that they should play on for now and that he will find the correct door eventually. 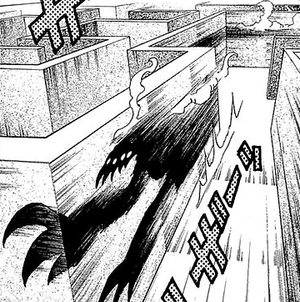 "Wall Shadow", moving through the walls

Dark Yugi begins his turn and Summons "Beaver Warrior", which he moves four spaces into the maze. He notes that there is quite a distance between his team and the enemy and presumes that the battles will not take place until the second half of the game. Meikyû the Elder is aware of what is thinking and thinks that it is wrong. He activates "Polymerization", combining "Shadow Ghoul", with the "Labyrinth Wall", creating the "Wall Shadow", which can move quickly along the walls of the labyrinth. It reaches "Beaver Warrior" and destroys it with its "Labyrinth Kamaitachi" attack, dropping Dark Yugi's Life Points to 1600. "Wall Shadow" then retreats back into its wall. Meikyû the Elder claims that that the "Wall Shadow" will instantly intercept any intruders and that Dark Yugi and Jonouchi are as good as captured by the "giant beast called the labyrinth".

Jonouchi Summons "Axe Raider" and plays one card face-down. Since he cannot fight what he cannot see, he decides to keep "Axe Raider" away from the walls and on standby to attack if anything comes close. Dark Yugi thinks that that was a good idea and Jonouchi hopes that Dark Yugi understands his strategy.

Anzu hopes that Jonouchi does not anything stupid, but Bakura says not to worry, as Dark Yugi will back him up. Honda hopes that Bakura is right, since the tag team nature of the Duel could allow the opponents to concentrate on Jonouchi and take him down. 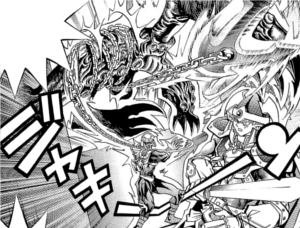 "Wall Shadow" gets caught by "Kunai with Chain".

Meikyû the Younger plays a Trap Card, "Jirai Gumo", face-down. Now if one of Dark Yugi or Jonouchi's monsters steps on one of a particular group of squares, it will fall victim to the landmine spider. He then Summons the "Labyrinth Tank", which he plans on using to attack their monsters that they keep from "Wall Shadow".