"The Legendary Dragon" (の！！ Densetsu no Doragon!!) is the seventy-sixth chapter of the Yu-Gi-Oh! manga. In its first English printing, it was numbered as the seventeenth chapter of Yu-Gi-Oh! Duelist; in the 3-in-1 edition, its number was changed to match the original Japanese printing.

Dark Yugi and the Ventriloquist of the Dead finish their Duel. 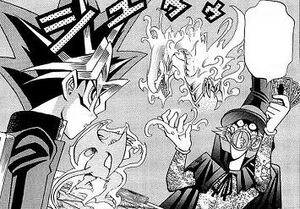 The Ventriloquist of the Dead is surprised to see the "Blue-Eyes White Dragon" he played disappear in front of him. Dark Yugi is also stunned at first, but suspects this was due to Kaiba: he had believed in Kaiba and knew that his will to lived dwelled in that card. Jonouchi doesn't understand why the dragon self-destructed, but compliments Dark Yugi, thinking it was a result of something he did. Anzu wonders why it happened and thinks that Kaiba's card actively refused to attack; Jonouchi tells her that idea is stupid, since cards can't think like people do.

Regardless of how it happened, Bakura notes that Dark Yugi now has a chance to win. Saruwatari wonders if there was some sort of malfunction with the Battle Box, but Mokuba says that a KaibaCorp Battle Box would not break that easily - his brother's cards can't be used by just anyone.

Dark Yugi (500 Life Points) and the ventriloquist (700 LP) continue the Duel. The ventriloquist has no monsters in play, and Dark Yugi urges him to hurry up and play one. Doubting a miracle will happen twice, the ventriloquist is convinced victory is assured if he can draw the remaining "Blue-Eyes White Dragon". In the meantime, he plays "Grappler" (1200 DEF) in Defense Mode.

With "Stop Defense" in play, Dark Yugi is forced to play his monsters in Attack Mode, and will lose if the ventriloquist plays the last "Blue-Eyes White Dragon". Dark Yugi plays one card face-down and then Summons "Celtic Guardian", which he uses to attack and destroy "Grappler".

The ventriloquist plays an unnamed monster in Defense Mode and another card face-down; Dark Yugi plays another card face-down and "Mystical Elf" in Attack Mode. Jonouchi comments that the Duel is so thick with tension, it's becoming difficult to watch. With face-down cards on both sides, Bakura bets that one of them is the trump card that will decide the Duel. 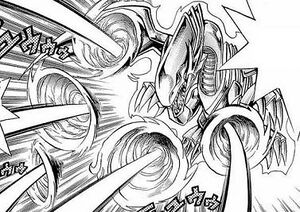 The attack reflected by "Mirror Force" is sucked into space-time by "Negate Attack". 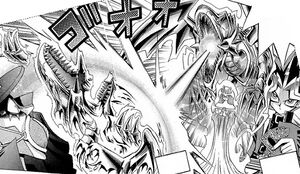 The ventriloquist imagines the doll taking his form and coming to life.

With the Duel over, Dark Yugi is still enraged at the theft of Kaiba's Deck and his soul being played with using a a doll, and refuses to let the ventriloquist just walk away. He inflicts a Penalty Game on the ventriloquist that causes him to imagine the Kaiba doll, now transformed into a duplicate of him, coming to life and tormenting him. As he screams for help, the doll is shown lying harmlessly on the ground.

Dark Yugi now has six Star Chips and retrieved Kaiba's Deck - however, he notices Mokuba is gone and suspects Pegasus' men took him back to the castle. Back at Kaiba Manor, Kaiba has just awoken from his coma and storms out of the mansion, chewing out his bodyguards for allowing Mokuba to be kidnapped. Despite his maid trying to keep him from leaving, Kaiba has a helicopter ready to take him to Duelist Kingdom.

Dark Yugi vs. Ventriloquist of the Dead[edit]

In the Yu-Gi-Oh! anime, the end of the tenth episode, "Give up the Ghost", is based on this chapter. There are a number of differences including: