"Duel Without End" is the eighty-ninth chapter of the Yu-Gi-Oh! manga. In its first English printing, it was numbered as the thirtieth chapter of Yu-Gi-Oh! Duelist. In the 3-in-1 edition, its number was changed to match the original Japanese printing.

Jonouchi Duels Ghost Kozuka in the Graveyard field. Keith, who has spruced-up Ghost's Zombie Deck, advises him against playing Zombies for the first few turns, which initially seems disadvantageous, as Jonouchi's monsters plow through them. 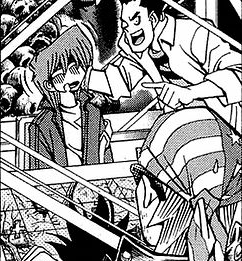 Kozuka lays his cards on the table and threatens to have his Deck of Zombies tear the flesh off of Jonouchi's bones, as he prepares to duel him. Satake tells Jonouchi to get out his cards, but finds he has fainted. The others start to laugh at him and Keith is disappointed, as he had been thinking this guy would be worth beating since he is a friend of Yugi.

After a bit more teasing, Keith orders them to wake him up. Satake delivers a slap to the side of Jonouchi's face. On reaction, Jonouchi grabs him by the collar and presses him against the wall of the Battle Box. Looking out of the box, he notices the floor lined with skulls and asks where he is. As he sits down, Kozuka tells him that they are in the crypt, a hidden Duel Monsters arena, and that the caves are haunted by the spirits of soldiers killed in the Pacific War. Terrified, Jonouchi lays his Deck down on the table and Kozuka declares that they shall both bet all 4 of their Star Chips.

Keith watches the Duel from behind Takaido and Satake. It looks like he is about to win another 4 Star Chips, he thinks and thanks to teaming up with these idiots and taking out duelists one at a time, he should be at Pegasus Castle in no time.

Remembering what Kaiba said about him becoming too afraid to Duel again, Jonouchi feels that if he runs now, he really will be a loser. And if he acts like a loser, he will not be able to look Yugi in the eye.

Both players start with 2000 Life Points and Jonouchi prepares to make the first move.

Outside Yugi, Honda, Anzu and Bakura search for Jonouchi, who has been gone for 20 minutes. Honda is certain Jonouchi could not have gotten lost. Yugi hopes he did not accept a challenge without telling them, but considering Jonouchi has been keen on proving himself lately, Honda thinks it is possible. The group split up; Honda and Bakura check the Duel boxes, while Yugi and Anzu check the forest.

Kozuka's monsters getting destroyed in battle

Jonouchi Summons "Axe Raider" and Kozuka thinks that it is just a common Warrior card, that his Zombies will have no problem tearing apart. He prepares to play "Medusa's Ghost", which being a Zombie should get powered-up by the Graveyard terrain. However Keith stops him and insists that he play "Zanki" instead. Ghost wonders why he is suggesting that, since it is not a Zombie, but Keith says that he put that card in the Deck for a reason. Kozuka objects that it is weaker than "Axe Raider" and will get beaten, but Keith assures him that if he listens to him, he cannot go wrong. Satake agrees, mentioning that they got this far thanks to Keith's advice. Jonouchi calls Kozuka and tells him to fight by himself and stop asking his friends for help. Kozuka decides to trust Keith and plays "Zanki" in Attack Mode. "Axe Raider" uses its "Shippugiri" attack to destroy "Zanki", dropping Kozuka's Life Points to 1800. Jonouchi celebrates winning the round, while Keith thinks everything is going according to plan.

Kozuka wonders why Keith got him to do that and prepares to Summon a Zombie on his next turn. However, Keith stops him again and instructs him to play "Crawling Dragon". Kozuka thinks the same thing will happen and it will get killed straight away, but Keith advises him to do it, insisting that he has a strategy. Kozuka plays "Crawling Dragon" in Defense Mode and it is destroyed by "Axe Raider".

On his next turn, Kozuka plays "Crass Clown" and Jonouchi counters with "Flame Swordsman", who defeats it with his "Tôki Enzan Ken" attack, dropping Kozuka's Life Points to 1350. Jonouchi thinks that he can win and reflects on how he has relied on Dark Yugi in the past, but thinks he is now confident enough to trust his own instincts. Letting his confidence take control, he offers to fight all of Kozuka's friends after he wins this Duel. 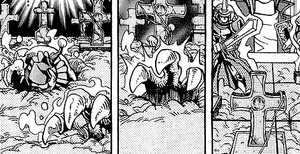 Kozuka's monsters emerging from the ground

After drawing his next card, Kozuka realizes what Keith's plan had been. Keith orders him to play the trump card and Kozuka activates "Call of the Haunted". Keith explains that using cards that are already undead does not give you the most out of your Graveyard, but there are better ways, like this. The three monsters that Jonouchi destroyed, emerge from the ground, as unkillable zombies. "Zanki", "Crawling Dragon" and "Crass Clown" become "Armored Zombie", "Dragon Zombie" and "Clown Zombie" respectively and gain a 30% power boost, due to being Zombies in the Graveyard terrain. 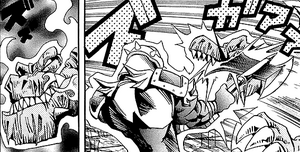