This chapter was originally printed in the Weekly Shōnen Jump magazine in Japanese. Its first English release was in the Shonen Jump magazine. It has been reprinted in volume 5 of the tankōbon and volume 4 of the bunkoban.

Katsuya Jonouchi takes part in a TV game show, called The Get the Million Game in order to pay off his father's gambling debts.

At school, Katsuya Jonouchi tells Anzu Mazaki, Hiroto Honda and Yugi Mutou that he is going to be on TV, on a show called "The Get the Million Game". If a player wins all the challenges, the grand prize is ¥1,000,000 (about $10,000 US at the time). Once he wins that Jonouchi says that he will not have to work himself to death with part time jobs. Honda points out that he has not won the money yet. Jonouchi tries to ignore him, assuring himself that he is got to win. He thinks to himself that if he wins, he can pay off his father's gambling debts and liquor store tab. Then he will not have to run from the collection agencies anymore and will start a new life; his days of struggling are over.

Anzu mentions how Jonouchi has been doing a lot of work to put himself through school and Honda reminds them of how he did that paper route in middle school and all the other kids called him the "lone paperboy". He put all his hopes in the postcard he sent out the TV people, Jonouchi thinks, and the guy who picked it must be a god.

Yugi suggests that they be in the studio audience so that they can cheer Jonouchi on.

At a ZTV programming department, the producer asks what sucker is going to be on the "Get the Million Game" today. A man hands him information on Jonouchi, saying that they picked him out from the entries. He had his postcard decorated with rainbow colors to make it stand out. They have done a thorough background check on him and found that his father is an unemployed alcoholic with a gambling addiction and Jonouchi works part time to pay off his father's debts. He is is 100% poor, the man says. The producer says that he is perfect; Dead end job people will do anything to get a million yen. They go money crazy and the public love it. The producer smirks and adds that no matter how hard Jonouchi tries he will not win and starts laughing. 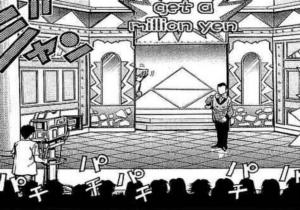 The Get the Million Game

In the studio, The Get the Million Game is starting. The host introduces today's contestant as "This strapping young man. 16 year old Jonouchi from Domino City." Jonouchi starts waving at his friends in the audience, saying he is on TV. Anzu, Yugi and Honda cheer him on.

In a control room, the producer ha a technician zoom in on Jonouchi and add the caption "Needs to win the grand prize to repay his father's debts... Can he make it?!" The producer smiles; The audience now know pathetic the kid is. There is nothing like a good sob story to boost your ratings. 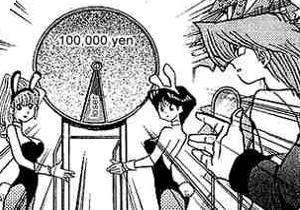 The first game on the show begins, "Darts of Fortune". If Jonouchi wins, he gets ¥100,000 and can go on to the next stage. A blonde and a black-haired bunny stand at a wheel, which is divided into one large and one small sector. The large sector has "¥100,000" printed on it and the small one has "lose" printed on it. The host explains the rules; They will spin the wheel and Jonouchi is to try and throw the dart into the "¥100,000" section. Jonouchi throws the dart and it lands just outside the "lose" section. The host announces that Jonouchi wins. Jonouchi sweats a little, seeing how close he was to losing. Jonouchi is awarded a medal with "10" (100 in the English version) on it. 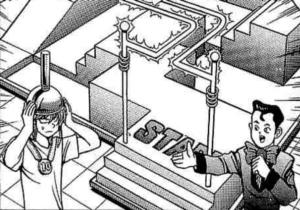 They proceed to the second game, where the prize is now ¥500,000 and the risks have also increased. The game is "The Electric Helmet". This is a variant of the "do not touch the wire" game. Jonouchi must wear a helmet with a bar on top while he runs through a course between two overhead high voltage wires within the time limit and without letting the bar on the helmet touch the wires. If the bar makes the slightest tap to the wires, Jonouchi will receive a devastating electric shock. The game starts and Jonouchi walks through the course with his heart pounding and thinks of the prize money. As time starts to run out, he races to the end of the course and clears it. The black-haired bunny awards him a "50" (500 in the English version) medal. Anzu compliments Jonouchi and Honda says that he is one step away from getting the whole million.

The host announces that they will take a break and be right back after a word from their sponsors. Jonouchi thinks to himself; If he wins the million, he and his father will be able to put the past behind them and become a real family again.

Yugi leaves his seat to go to the bathroom. As he searches the hallway, he realizes that he is in a TV studio and wonders if he will meet a star. He passes the producer and a technician. The producer asks how the rating are and the technician replies that they are good. The producer then asks if the wheel in the next round is rigged to lose. The technician says that is; everything is ready. Yugi overhears this. He watches the two of them leaving. The producer laughs that the one thing better than seeing a poor person struggling for money is seeing them fail at the last minute; Suffering is always a profit. He calls the idea of giving a poor person money a joke and does not care as long as he gets paid. Yugi gets mad over the producer taking advantage of Jonouchi's desperate hopes and vows to never forgive him. 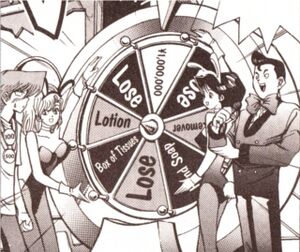 The Wheel of Fate

The show continues and the host says that it is now time for the final round; If Jonouchi clears this he will win the million yen. The final stage is The Wheel of Fate. The two bunnies stand next to a wheel, which is to be spun. If the wheel stops on the "¥1,000,000" section, he will win. If he fails, he will lose all the money he has won so far. The wheel is divided into eight sections. How they are labeled is different in the Japanese and English versions. Starting at the top and going clockwise they are: In the Japanese version: "¥1,000,000", "Scar", "Thrash", "Loser", "Scar", "Tissue", "Trash" and "Scar". In the English version: "¥1,000,000", "Lose", "Makeover", "Hand Soap", "Box of Tissues", "Lotion" and "Lose". Jonouchi goes for it and the wheel starts. It would not stop until he says "stop".

Back stage, the producer and the technician watch. The technician is given orders to push a button when Jonouchi says stop. There are fourteen buttons, but the technician has painted the one he needs to push red, so he will not make a mistake. When he pushes the button, it will be impossible for the button to land on the "¥1,000,000" section. 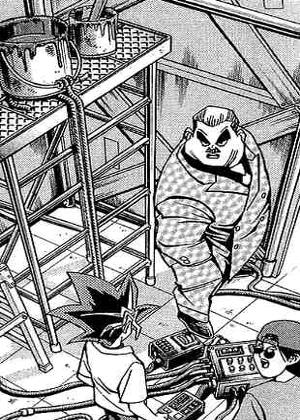 Dark Yugi appears behind the two of them, holding two ropes. The producer tries to shoo him away, but Dark Yugi ignores him and asks if they are feeling lucky. He shows them that there is a can of paint on top of the scaffolding next to them. Out of the two ropes, he is holding, one is tied to its handle. He wants himself and one of them to tie their arm to a rope and on the signal, each of them are to pull their rope, giving them a 50-50 chance of getting the bucket. The producer tries to shoo him again, but Dark Yugi insists that they play if the producer does not want anybody to know about him rigging the wheel.

The producer orders the technician to take a rope. He picks the one of the right and Dark Yugi takes the one on the left. They each tie it to their arms. After they are both ready, Dark Yugi says when to pull. The bucket of paint comes down on top of the technician's head. With him out of action, the producer goes to push the button himself, but finds the switchboard is now covered in red paint, so he cannot tell which one to push. If the wheel stops on the winning space, he says that "that shiftless bum" will get a million yen. Dark Yugi points out that the producer is now showing his true colors and inflicts the Penalty Game "Mind on Air", making yen symbols appear in the producer's eyes. 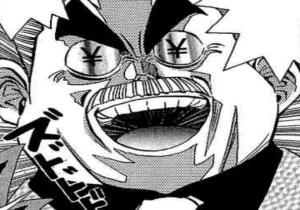 On the stage, Jonouchi is asked to tell the wheel when to stop. The wheel stops on "¥1,000,000". The blonde bunny starts clapping. The host stutters and shouts out that Jonouchi wins the million yen, but thinks to himself that this never happens. He hands Jonouchi the check for ¥1,000,000.

Everyone's attention is diverted as the yen-eyed producer is now over at the camera laughing and yelling at the audience to stop watching TV for long enough to send him their money. The cameraman sighs and someone else tries pulling the producer away. The hosts sighs that they are done for. Dark Yugi walks away, saying that apparently true poverty lives in the soul.

Several days later, Anzu, Yugi and Honda see Jonouchi crying. Honda asks what is wrong and is told that the TV production company went bankrupt and Jonouchi's check is now just a worthless piece of paper.