"Call of the Grave" is the ninetieth chapter of the Yu-Gi-Oh! manga. In its first English printing, it was numbered as the thirty-first chapter of Yu-Gi-Oh! Duelist. In the 3-in-1 edition, its number was changed to match the original Japanese printing. 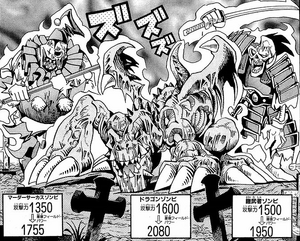 Kozuka has just revived his monsters as Zombies with "Call of the Haunted" and destroyed "Axe Raider" with "Dragon Zombie". He asks Jonouchi how he likes that and boasts that his "army of darkness" is invincible. Jonouchi wonders to himself how he is supposed to kill what is already dead.

Kozuka urges Jonouchi to get on with his turn, unless he is scared, in which case he requests that Jonouchi not start foaming at the mouth again. Jonouchi insists that he is not scared, but a real Duelist, who does not run from Zombies. Jonouchi Summons "Garoozis" and gets it to attack "Clown Zombie" with its "Five-Point Slash" attack. "Clown Zombie" is destroyed at first, but instantly revived with "Call of the Haunted", with a further 10% ATK increase. Now at 1890 ATK, "Clown Zombie" uses its "Knife Toss, Acrobatics of Hell" attack to destroy "Garoozis", leaving Jonouchi with 1530 Life Points.

Jonouchi realizes that even if he beats these Zombies they just come back stronger and wonders if this means that there is no way to win. Looking at the four Star Chips, he wagered, he thinks that if he loses, he is out of the tournament. He reflects on Kaiba calling him a loser and saying that he would be too afraid to Duel again. He decides that he cannot give up or lose. If he believes in himself, he thinks he can win or otherwise he will not be able to face Dark Yugi again. 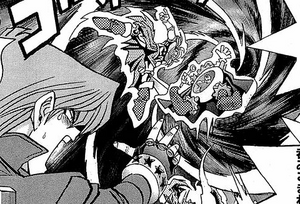 The effect of "Time Wizard" backfires.

Jonouchi draws "Time Wizard" and thinks that he might be able to use it to throw the Zombies into a time vortex. Keith starts to worry, having not expected Jonouchi to have that card. He realizes that if it uses its "Time Magic", there is a chance that the zombies will be killed. "Time Wizard" spins its "Time Roulette", which needs to stop on a "win", for it to use "Time Magic" on the opponent's monsters. However, it stopped on a skull, causing it to self-destruct. As a result, "Flame Swordsman" and "Time Wizard" were sucked into a vortex of time and Jonouchi took damage equal to half the ATK of "Flame Swordsman", bringing him down to 630 Life Points. Kozuka and his companions erupted into laughter, mocking Jonouchi for destroying his own cards.

Jonouchi plays "Kojikocy" in Defense Mode. Kozuka prepares to destroy it with "Dragon Zombie", but Keith stops him and explains that destroying it will not damage Jonouchi's Life Points. He suggests that Kozuka use the chance to draw a new card and beef up the Zombie army instead. Jonouchi calls Keith a kibitzer and asks who he is. He introduces himself as Bandit Keith, a top-ranked prize hunter in the United States, but does not expect himself to be well-known in Japan. The name sounds familiar to Jonouchi, who then remembers Kaiba talking about him. He says that Keith is the prize hunter, who fought Pegasus. He remembers that Keith is a Card Professor, whom Pegasus was the only person to ever defeat. With Keith helping Kozuka, Jonouchi thinks that he never had a chance of winning.

Keith explains that he is teaching Kozuka, Takaido and Satake perfect strategies for their Duels and says that Jonouchi does not have a prayer. Satake adds that after Jonouchi loses, he should tell Yugi that the four of them are going to Pegasus Castle. Keith claims that whenever he defeats someone they never play Duel Monsters or any card game again, because he beats them so bad that the sight of a card brings back flashbacks that cripple their whole body. Kozaku claims that it is the same for him and that he will make Jonouchi say farewell to his cards forever. 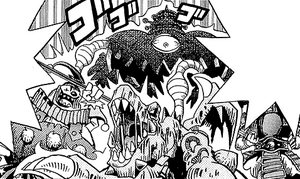 "Pumpking the King of Ghosts" feeds the other Zombies.

Under Keith's instruction, Kozuka Summons "Pumpking the King of Ghosts". He describes it as the king of the undead, whose body is nothing but a sac of ectoplasm, the fuel of evil spirits. It plugs its tentacles into the zombies to feed them, raising their ATK by 10% every turn. The ATK of "Armored Zombie", "Dragon Zombie" and "Clown Zombie" goes up to 2100, 2240 and 2025 respectively.

"Dragon Zombie" attacks and destroys "Kojikocy". On Jonouchi's next turn, he plays "Armored Lizard" in Defense Mode. On Kozuka's turn, "Dragon Zombie", now at 2400 ATK destroys "Armored Lizard". Kozuka remarks that Keith's strategy was perfect and Jonouchi plays "Glass Man" in Defense Mode, but Keith fells that it is not perfect yet; not until Kozuka draws "Stop Defense". As "Glass Man" is defeated, Jonouchi thinks that there is no way he can win and thinks of Yugi. 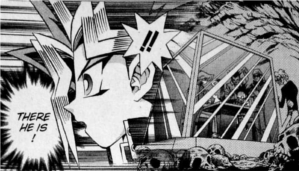 Elsewhere, Yugi wonders where Jonouchi could be and switches to Dark Yugi. Bakura and Honda report that Jonouchi was not where they were looking. Anzu calls Yugi, telling him to come on. However, Dark Yugi clasps onto the Millennium Puzzle and sees a vision of Jonouchi in a Battle Box underground. He starts running and tells his friends to follow. He hopes that Jonouchi does not give up and thinks that there is always a way to win, no matter how bad it looks.