"D.D.M.!!", known as "D.D.D!! in the Japanese version, is the 136th chapter of the Yu-Gi-Oh! manga. In its first English printing, it was numbered as the 77th chapter of Yu-Gi-Oh! Duelist. In the 3-in-1 edition, its number was changed to match the original Japanese printing. This chapter contains the first appearance of Dungeon Dice Monsters.

The Black Crown game store releases a new game, D.D.M., which makes everybody in town line up to buy it. Yugi and his friends go to the store to check it out as well, but Yugi is lured by Mr. Clown, who seeks revenge for losing to Yugi's grandfather, and set up to play D.D.M. with his son, Ryuji, who is none other than the creator of the game.

Yugi mocks Sugoroku, unaware he is behind him.

At the grand opening of the Black Crown, the launch date of D.D.M. has drawn in a massive line, much to the surprise of Yugi (who for once is not wearing his school uniform), Anzu and Bakura. Bakura explains that everybody has been waiting since last night to get a copy of D.D.M, and Anzu is shocked that the game could be so popular despite being completely unknown. Yugi looks at his watch, noting that it looks like Jonouchi is late and there is only half an hour until the store opens. He admits that he does not have enough money to by copies for him and Jonouchi because Grandpa cut his allowance over worry about the store. Bakura adds that there probably are not very many in stock on the first day, and Anzu comments that there probably will not be any left by the time Jonouchi arrives, calling it his own fault for being late. Jonouchi quickly turns up, apologizing for being late. Anzu tells him to go to the end of the line, and Jonouchi asks her not to be so mean. Yugi reassures Jonouchi that he is glad he made it in time, and Jonouchi replies that of course he did; everybody wants a copy of D.D.M, so he is going to get his hands of the first day limited edition and sell it for a good price. Anzu mutters that she knew it, and Yugi looks sadly over at the Kame Game, which is utterly deserted due to the Black Crown. Jonouchi apologizes as Yugi mutters that it looks like a ghost town. Yugi asks his friends not to tell his Grandpa that he bought a game from the Black Crown; they are their rivals after all. He does not notice his friends blanching at the sight of Sugoroku behind him, going on to claim that they know him; if there is a new game out, he has got to get it, and it does not matter if it is a rival store. Yugi whispers to his friends that just between them, his grandpa's taste in games is kind of old-fashioned, so it is no wonder their store is not popular. Jonouchi and Anzu try to warn Yugi of his peril, and Yugi finally sees his Grandpa looming behind him. As Sugoroku burns with anger, Jonouchi and Anzu leave Yugi to his fate and Sugoroku calls Yugi a traitor. 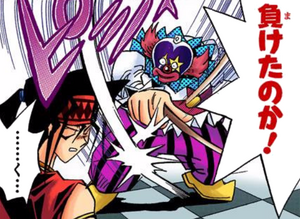 Up in the Black Crown, Mr. Clown watches the line from the window with his mask off, his shadowed, wizened face smiling at the sight of Yugi and Sugoroku. The door opens, and Ryuji enters, but looks away from his father and apologizes. Mr. Otogi puts his mask back on, reassuring Ryuji that it is okay and he asks if it is time. Ryuji states that they are all set up, and all that is left is to open the store. Mr. Otogi laughs, stating that at long last the curtain will go up on the drama of their revenge. Ryuji slowly admits that he challenged Yugi to a game the other day to see how good he was, and he was more than good; he was amazing. Mr. Otogi pulls out a switch out, asking what Ryuji is saying; he didn't lose, did he? Ryuji finds himself unable to answer, much to his father's shock, and he strikes Ryuji across the face, asking again if he lost. He screams that Ryuji cannot lose to Sugoroku's grandson, and Ryuji apologizes; he tried his best. Mr. Otogi rips off his mask and he orders Ryuji to look at his face, asking if Ryuji knows who did this to his face; it was Yugi's grandfather Sugoroku. Ryuji protests that he knows, since his father has told him that since he was little, and he begs his father to put his mask back on. Mr. Otogi covers his face again, apologizing to Ryuji for scaring him. He states that he will not do it anymore, and that Ryuji is all he has. Ryuji reassures his father that it is okay; he has taken on his father's sadness and anger, and he asks him to watch him as he gets revenge on Yugi and his old man. 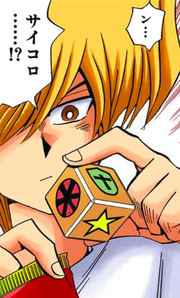 Jonouchi finds that D.D.M is dice.

11 am strikes, and the crowd floods into the Black Crown, sweeping up Yugi and his friends. The security officers maintain order, keeping excess people out of the store and ordering them to form a line to the from register. Everyone demands D.D.M, with one boy trying to by thirty packs, but the store only has enough for six boosters per customer. Poor Yugi keeps getting people cutting in front of him, separating him from Jonouchi (helpfully pointed out by Kazuki Takahashi as being on the other side of the store).

Jonouchi and Sugoroku manage to get out of the store with some packs of D.D.M with Anzu and Bakura. Despite himself, Sugoroku seems excited, and they open the packs to see what the fuss is about. Jonouchi takes out a large dice, and Bakura notes that the dice all have different symbols on the sides. Jonouchi wonders how you play the game, and Sugoroku suggests that they play it at his house. Jonouchi enthusiastically agrees, while Anzu wonders where Yugi went.

Yugi is still stuck in the Black Crown, but the crowd is beginning to die down. He frets that the store might sell out before he can get to the counter and wonders if everyone else got a pack, but Mr. Otogi waves him over, slipping a few packs of D.D.M into his pocket without him noticing and exchanging a look with a security guard. Yugi remains oblivious, having been moved to the front of the line. Before he gets to the counter, two security guards politely ask him to come to the office with him, before scooping him up by the arms and taking him to the office.

Packs of D.D.M are planted on Yugi

Yugi asks what he did in surprise, and is horrified to be accused of shoplifting. The guards search Yugi, stripping him of his jacket and the Millennium Puzzle despite Yugi's protests that he would never steal. Yugi begs them to give him back the Millennium Puzzle since it is important to him, but the guards tell him that he can have it back once he is proven innocent. They find the D.D.M packs in his jacket pocket, much to Yugi's shock. Mr. Otogi declares that this is a serious problem as he holds the Millennium Puzzle, commenting that it appears that underneath Yugi's innocent mask is the face of a thief. Yugi protests that he did not see anything and he tells the clown to return his Puzzle. Mr. Otogi declares that little boys who will not say "sorry" need a physical lesson and he orders the guards to take him away as Yugi yells at them to let him go. He laughs to himself, thinking that the Millennium Puzzle is his now. 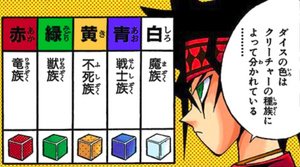 Ryuji explains the creature variations of D.D.M. (In the black-and-white manga, the different colors are represented by the level of dithering.)

The guards toss Yugi into a darkened room with a checkered floor. Ryuji sits at a gaming table, telling Yugi that he has been waiting for him. Yugi is shocked to see him, and Ryuji tells him to sit down so they can play a game. Yugi asks what Ryuji is doing and why he is here, and Ryuji explains that his father owns the Black Crown, while Ryuji is the inventor of the game they are about to play - D.D.M. Yugi is shocked to learn that Ryuji created D.D.M, and as he sits down at the table, Ryuji begins to explain the rules of D.D.M, short for "Dungeon Dice Monsters". He opens a case of dice, explaining that they are the dice that they will use to play. Each player will choose a "Dice Pool" of twelve dice; there are over 500 variations, each with different Levels and abilities. Ryuji tells Yugi to choose the dice that suit his strategy; Ryuji has already chosen his own Pool, and he will allow Yugi to choose the dice he wants. Yugi looks through the case, noting the different colors and symbols, and he wonders what dice to choose. Ryuji explains that the color of the dice indicates the type of Creature; white are Spellcasters, blue are Warriors, Yellow are Undead, Green are Beasts, and Red are Dragons. As Yugi muses over the term "creature", Ryuji adds that black dice are the exception; they contain special abilities and magical powers. Yugi chooses a Pool of blue, white, and black dice, and Ryuji explains that the stage for their game is the "Dark Field", a land of perpetual darkness deep underground. 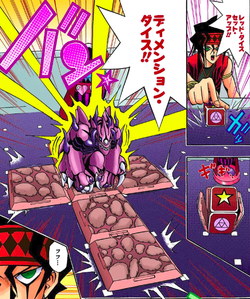 Holes open up in the table in front of them, and Ryuji states that the game is ready, telling Yugi to place his dice in the shooter. The holes close, and then the table works, dispensing the dice into a slot in front of Yugi. Ryuji explains that the table will automatically dispense his Dice Pool, and it should be shuffled fairly, as the dice sequence is an important factor in the game. He tells Yugi to take three dice, and Yugi does so. An opening four spaces wide appears on the table in front of Yugi, dispensing a strange wizard-like figure, while one resembling Mr. Otogi appears in front of Ryuji. Ryuji explains that these figures represent the players' life; they are the Dungeon Masters. They have three Life Points, so if a player takes three hits, they lose. He tells Yugi that it is time to go, and they declare "Game Start!"

Ryuji goes first, explaining that on each turn, the player will roll their three dice. He rolls two star symbols and a symbol of crossed swords, and he celebrates getting two Summon Crests. Ryuji explains that when two out of three dice show the same Crest he can activate that power. In other words, he gets to summon one of his creatures. Yugi is surprised that Ryuji is summoning a creature, and Ryuji states that he will place one of the dice on the field. He chooses a Red Dragon dice, and places it onto one of the spaces on the board near his Dungeon Master. He declares "Dimension Dice" as the dice unfolds, revealing a hologram of a gargoyle-like dragon. Yugi is shocked that a creature came out of the dice, and Ryuji confirms that this is a tactical combat game where you create your own dungeon, attack the enemy's territory, and then win.

This is a D.D.M. match. Check the article for rules.

While no cards appear in this chapter, "Blue-Eyes White Dragon", "Summoned Skull" and "Kuriboh" appear as plushies.

The following creatures appeared in this chapter.