"Defeat the Darkness!" is the eighty-second chapter of the Yu-Gi-Oh! manga. In its first English printing, it was numbered as the twenty-third chapter of Yu-Gi-Oh! Duelist. In the 3-in-1 edition, its number was changed to match the original Japanese printing.

Dark Yugi tells the Player Killer that he shall show him the card he will defeat him with and reveals the "Swords of Revealing Light" in his hand. He explains that the swords have the power to block enemy attacks for three turns and even if they try to hide in darkness, the swords will find them. He proclaims that the Player Killer's monsters will be destroyed by this card. The Player Killer worries, but says that the darkness cannot be conquered by a card of that level. Dark Yugi laughs that he will sees what he means in five turns.

Dark Yugi Summons "Curse of Dragon" in Defense Mode and places one card face-down in his Spell & Trap Card Zone, before ending his turn. The Player Killer thinks that the face-down card must be "Swords of Revealing Light". Dark Yugi then points out that it is now four turns until the Player Killer dies.

Anzu asks Mai if it is okay for Dark Yugi to show his cards, like he just did. Mai says that it is not against the rules and theorizes that Dark Yugi might be planning on using another weapon against the darkness; something other than a card. She says that there is one thing that can get through the darkness and that Anzu knows what it is. 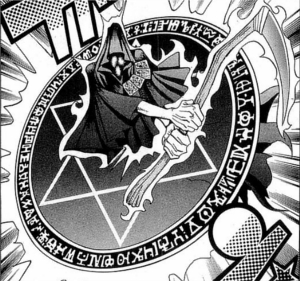 "Reaper of the Cards" gets caught in "Spellbinding Circle".

The Player Killer Summons "Reaper of the Cards", which uses its "Card Eraser" ability to attack Dark Yugi's face-down card. He celebrates, thinking he has destroyed Dark Yugi's trump card. However Dark Yugi points out that he never said that the card he played was "Swords of Revealing Light". The Player Killer realizes that "Reaper of Cards" has stopped moving and asks what is going on. Dark Yugi then reveals that the card he actually played was "Spellbinding Circle" and by attacking it, "Reaper of the Cards" has now become trapped in its hexagram. Dark Yugi explains that when playing Spell or Trap Cards, "Reaper of the Cards" is something you should be cautious of, but now that he has it trapped in the hexagram, he does not have to worry about that. 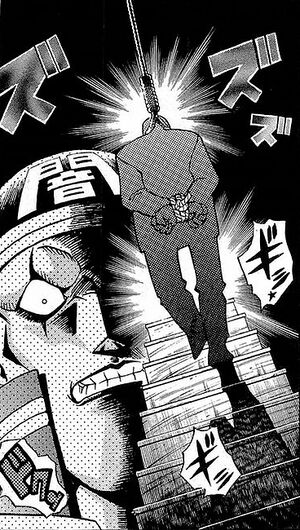 The Player Killer of Darkness sees a vision of himself going to the gallows.

Anzu sees that Dark Yugi's threats have put the Player Killer off balance, making Dark Yugi win by talking. She wonders if this is what Mai was talking about. Mai takes note of how the Player Killer is being scared in his won territory by the power of Dark Yugi's words. She is impressed by the self-confidence Dark Yugi displays. 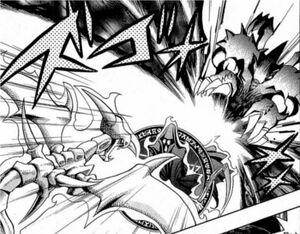 "King of Yamimakai" attacks "Reaper of the Cards" instead of "Curse of Dragon".

The Player Killer draws his ultimate card, "King of Yamimakai", with 2600 ATK, and Summons it. Dark Yugi heard the card's name from the Player Killer and although he cannot see it, he thinks its ATK seems high. He laughs that it is the card that is going to kill Dark Yugi and it will all be over before he can play his trump card. "King of Yamimakai" attacks "Curse of Dragon" with its "Evil Shock Wave" attack. However "Reaper of the Cards" is still trapped between the two monsters inside the hexagram. The reaper acts as a shield for "Curse of Dragon" and gets destroyed instead, dropping the Player Killer's Life Points to 1200.

The end of episode 14 and the beginning of episode 15 of the anime are based on this chapter. A number of changes are made, including: