"Terror Cubed!!!" is the thirty-third chapter of the Yu-Gi-Oh! manga.

Inside the empty Death T-3 room, Yugi and his friends reminisce over how their lives have changed, before large blocks start to fall from the ceiling.

Sugoroku Mutou is rushed along on a stretcher. He is described as being in respiratory distress, following an angina secondary to psychogenic shock. His heart and blood rate have elevated. Overall he is in an extremely critical condition. On the stretcher, he pants and repeats Yugi's name.

In Kaiba Land, Yugi feels Sugoroku's heartbeat in his cards, which he realizes is getting faster. He tells his grandfather to hang in there. In order to save him, Yugi thinks that he must defeat Kaiba with the Heart of the Cards. Honda points the the entrance to the next stage up ahead and says that they are getting closer to Kaiba, one step at a time.

In his control room, Kaiba observes that Yugi and his friends have made it to Death T-3. He does not believe this is outside the realm of chance, but realizes that he has underestimated a number of factors. They are a good team and have been winning the games due to their friendship, so Kaiba decides that he must break this union. He smiles and comments that friendship is just an illusion and everybody cares most about themself. Once Yugi and his friends find themselves in real trouble, they will betray their friends to save themself, which is where Death T-3 comes in, he smiles. 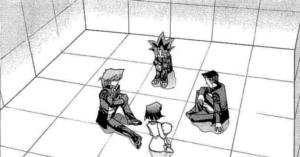 The group wait for something to happen.

The gang arrive at the entrance to Death T-3. Johji has now fallen asleep. Wondering what could come after the Horror Zone, they think that this could be even more cheap and sadistic, since Kaiba designed it. However they find themselves in an empty room and the door slams shut behind them. They look around for an exit and do not find anything at first. Honda notices the ceiling is very high up. It is too dark up there to tell, but there could be an open at the top, he thinks. He sees a hole in the wall about 10 meters up, but there is no way they can climb up to it. Yugi starts to wonder if this was Kaiba's plan all along, to get them trapped, but Jonouchi advises him not to give up and suggests that they just wait and see what happens. The group sit on the floor and wait, but after waiting a long time nothing happens.

Yugi thumps his fists on the floor, weeps and apologizes for getting everyone into this mess, saying that it is all his fault; if he wasn't here none of this would have happened. Jonouchi seizes him by the jacket, says that that's enough and orders him not to say that again. Honda tries to calm him down, but Jonouchi continues. He asks Yugi not to say stuff like that and if he understands why they came with him. It's because they're friends, Jonouchi tells him. Honda gets Jonouchi to let go, reminding him that he's not the same Jonouchi who used to beat Yugi up.

Jonouchi addresses Honda and says that hey have been stupid punks. Honda agrees that they were. Jonouchi claims to have lived in a stupid society, with stupid parents and his stupid self. He never learned to like himself, until he met Yugi. Yugi was an innocent kid that everyone took advantage of, Jonouchi explains, at first he couldn't stand to watch him and thought Yugi was an idiot. However, Jonouchi now says that it wasn't Yugi he was really mad at. He was mad at himself.

Honda says that he knows how Jonouchi feels, he was the same; he would get so wound up that he needed to pick a fight. It didn't matter who with; some local punks or even a telephone pole. He would hit them with everything he had, he says, but then realized that the person he wanted to hit was himself. Anzu looks at him surprised.

He tells Yugi that he can laugh, at what he's about to say, but back when he stole part of the Millennium Puzzle, giving it back took him more courage than anything. Ii was at that point that he started to like himself a bit for the first time in his life. He seizes Yugi again, demanding him to he listen. Friends are people who you like and because of them you learn to like yourself, he says and that is why he hangs out with Yugi. So if something is hurting Yugi, Jonouchi wants to share it, because that's what friends are for. Yugi wipes the tears from his eyes, as Jonouchi convinces him to not give up. 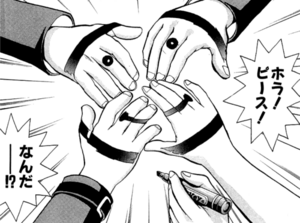 The symbol of friendship

Anzu says that no one learns to like themselves on their own; it is a game you play throughout life. She gets her friends to look at the room and asks if the white walls remind them of a canvas. She says that she always thought that if she went somewhere special with her friends, she would leave her name there to remember it by. Jonouchi asks if she is a tagger. Anzu laughs and winks as she takes out a marker. She gets Honda, Jonouchi and Yugi to put their right hands out next to hers and draws a symbol of friendship, in the form of a smiley face, across the four of them. The others are confused at first, but she explains that after they graduate and go their separate ways, if they are ever alone, all that they have to do is think of the smiley face and remember being there and being friends. Even when she is studying dance in New York, she plans to always remember the time she spent with them. Although the ink will wear off, the ring will still be there in their hearts, she explains.

A giant cube drops from the ceiling just above the four, who leap out of the way. Yugi realizes that this is the game. Anzu picks up Johji, who is still asleep. The next cube falls, just missing Yugi.

In his control room, Kaiba smiles and wonders how many of them will make it out without being flattened.

Yugi damns that there is no way of telling where the blocks are about to fall; all they can do is run and dodge.

Kaiba smirks that their numbers are a liability in this game; if one stops to worry about someone else, they get squashed. He doesn't believe that they can win without sacrificing their friends. 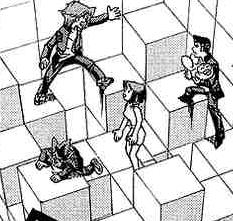 The room filling with cubes.

Jonouchi comments that this is like dancing with death and that there is nowhere left to run. Yugi tells them to climb up on the cubes and that the idea of the game is to get out of the room through the hole in the wall. The others follow suit. Yugi advises them to keep away from the edges, because if they get boxed in, they will die. At this rate, Jonouchi believes they will get flattened. They continue to climb up as the blocks fall and pass around Johji, who to Jonouchi's surprise can sleep through this.

Anzu suddenly notices a rhythm to the timing of when the blocks fall. She wonders if there is a rule to where they fall as well. Yugi understands that since Anzu is a trained dancer, she has talent for reading rhythms. Anzu concentrates, starts to count and on "three" correctly points to where the next cube would fall. Anzu explains that the timing of the cubes is the rhythm and where the cubes will fall are like the steps of a simple dance. The mechanism of the game must be too complicated for the computer program controlling the game, Yugi says, so it has to use a simple dance, rather than a complex one.

Jonouchi gets close to the exit, holds Johji and helps Anzu up. Honda is down a bit lower and urges Yugi to hurry up. Anzu notices the rhythm suddenly change and shouts at Honda to look out. The block lands at Honda's back, barely missing him. Johji, Jonouchi and Anzu make it out and tell Honda and Yugi to get up there. Honda asks Yugi to take his hand, but Yugi tells Honda to save himself first. Honda refuses and orders Yugi to take his hand, before the exit gets blocked. Honda grabs Yugi's hand and lifts him up to Jonouchi, who helps him out.

Jonouchi and Anzu shout at Honda to come on and ask what he is waiting for. Honda says that this is as far as he goes and shows them that his jacket is caught between two cubes. He gives a thumbs up and says goodbye, before a cubs falls and blocks the exit.

This chapter was redone in the Toei anime in episode 22, ""Tearing - Boarderline Shooting"".

Jonouchi's speech, encouraging Yugi to not give up occurred after the latter had revealed that he had felt the presence of another Yugi, occurred in episode 23, ""Capmon King! The Decisive Battle"".

Like the rest of Death-T in this series, Johji was not present and Miho Nosaka was. When the group entered the room, they did not reflect on how their lives had changed and the game immediately began.

Elements from this chapter were used in the anime in the first episode, "The Heart of the Cards".

Some of the dialog is reused before Yugi faces Kaiba. Jonouchi says that his life changed after meeting Yugi and that he used to love fighting, but it was Yugi who changed him. (This is changed in the English version.) Anzu also drew the symbol of friendship, but with a few differences: