"Challenge!!", known as "Challenge!!!" in the Japanese version, is the sixtieth chapter of the Yu-Gi-Oh! manga. In its first English printing, it was numbered as the first chapter of Yu-Gi-Oh! Duelist. In the 3-in-1 edition, its number was changed to match the original Japanese printing.

Starting with this chapter, the plot shifts to a Duel Monsters centered universe.

Yugi and his friends watch the Japanese Duel Monsters tournament finals on TV, before Yugi opens a package from Industrial Illusions, containing a recording of Maximillion J. Pegasus, the creator of Duel Monsters.

At Domino High School, Duel Monsters is being played by the students at recess. As someone Summons "Mountain Warrior". Yugi Mutou comments that Duel Monsters is "a trading card game where players become wizards who summon monsters and cast spells to do battle". 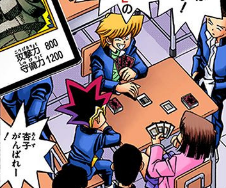 Katsuya Jonouchi, who is facing Anzu Mazaki Summons "Rock Ogre Grotto #1" in Attack Mode and laughs as he attacks Anzu with it and brags about how strong it is. However on Anzu's turn, she activates the Spell Card, "Wind of the Gods". The holy wind erodes Jonouchi's monster, turning it into dust and blowing it away. Jonouchi's Life Points drop to 0 and Anzu wins the game. Jonouchi throws his cards up in the air in frustration. Anzu smirks and calls Jonouchi lame.

Jonouchi seizes Yugi by the shoulders and shakes him as he asks why he can't win and what it is he's doing wrong. Yugi asks to see his Deck and looks through it. To Yugi's surprise, all 40 cards in Jonouchi's Deck are monsters. Jonouchi grins and says that he stuffed it with the toughest monsters he could find. However Yugi says that's not good; The biggest strategy in the game is combining monsters with Spell Cards. If someone fights with monsters alone, the opponent can easily dodge their attacks. Jonouchi pauses and thinks about that. He then grabs Yugi by the shoulders again, begging that he train him to become better at the game. Yugi agrees and invites Jonouchi to come by his house after school. Jonouchi has a great time, Yugi says, since the Duel Monsters tournament is on TV at 5:00 tonight.

Yugi arrives home, with Anzu and Jonouchi just as his Grandpa closes the family shop. Jonouchi is surprised to see Grandpa closing this early. Grandpa laughs and says that he can't be stuck watching the shop when the Duel Monsters finals are on.

Inside, Grandpa hands Yugi a package that arrives earlier. Yugi wonders who it is from, but there is no name on the return address. 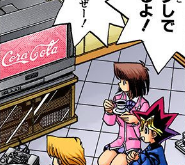 Everyone gathers around the TV.

At 5:00, Anzu, Yugi, Jonouchi and Grandpa sit down with some food and drink to watch the Duel Monsters final on TV. In front of the TV is a console, resembling a PlayStation. Just before the show starts there is a Cora-Cola commercial on the TV.

Jonouchi says that this tournament will determine the number one duelist in Japan. He asks Yugi why he didn't take part, commenting that Yugi had the potential to have went all the way. Yugi replies that he had made a decision; When he enters a tournament it will be to fight "him". Anzu asks if he means Kaiba. Yugi affirms this and says that it is dream to duel Kaiba fair and square. Anzu says that she hears Kaiba is still in the hospital, and Yugi says that he visited Kaiba yesterday, but there was still no change. Even if Kaiba does come back, Jonouchi says, he will never trust that creep.

The presenter then says that, for the thousands of Duel Monsters fans across the country, it all comes down to this moment; the final round of the Duel Monsters tournament is about to begin. Out of the two hundred who made it through the regionals, he introduces the two finalists; the fourteen year old Insector Haga from East Japan, and the fifteen year old Dinosaur Ryuzaki from West Japan. 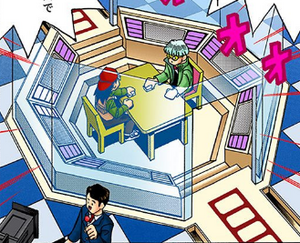 Haga and Ryuzaki prepare to Duel.

Haga and Ryuzaki sit down in a Virtual Simulation Box, which was developed by Industrial Illusions in cooperation with KaibaCorp. Haga says that he can feel Ryuzaki's cards shaking in fear. However, Ryuzaki is unmoved, and says his dinosaurs will crush Haga like an ant.

The Duel begins, and Jonouchi asks Yugi who he thinks will win. Yugi explains that Haga specializes in insect combos, while Ryuzaki uses the megaton power of his dinosaurs to overwhelm his opponents. To Jonouchi, there's no question that the dinosaurs will beat insects.

The presenter declares Haga the winner, and introduces a guest to give Haga his trophy and prize money. The guest is Maximillion J. Pegasus, the president of Industrial Illusions and creator of Duel Monsters.

Pegasus congratulates Haga and hands him the trophy. As he does so, he tells Haga that he must come to the tournament his company will be sponsoring.

The presenter announces the end of the show, and reminds viewers to collect the limited edition Duel Monsters tournament cards at centers near them.

Grandpa and Yugi aren't surprised that Haga won, but Yugi still feels it was a great Duel. From watching the Duel, Jonouchi now understands what Yugi said about how strong monsters can't stand against a good combo, and urges Yugi to train him.

Before Yugi starts training Jonouchi, Grandpa suggests that he open the package first. Everyone gathers around as Yugi opens the box and finds a gauntlet, two star-shaped chips and an 8 mm videotape. They're slightly puzzled, but Jonouchi guesses that there might be some explanation on the tape and asks if Yugi can play it. Yugi says that they have an 8 mm player and inserts the tape.

Maximillion Pegasus appears on the TV screen, saying that he is pleased to finally meet Yugi. Yugi and Jonouchi are surprised and recognize him as the American who was on the TV, the man who created Duel Monsters. Pegasus says not to be surprised, he just wanted to send a video letter to Yugi, "the real champion". Pegasus congratulates Yugi on his Duel Monsters skill and victory over Seto Kaiba. Pegasus expresses his desire to test Yugi's skill and challenges Yugi to a game of Duel Monsters against the recording of him. Yugi is shocked and Grandpa says how preposterous it is to Duel against a prerecording; There's no way Pegasus can know what cards Yugi is playing. Pegasus instructs Yugi to build his Deck in front of the monitor and says that they shall begin their Duel in five minutes. Yugi considers it a dream to be able to face the creator of Duel Monsters and accepts the challenge. He spreads some cards across the floor and prepares his Deck.

After Yugi is ready the Duel begins. Yugi goes first and Summons "Koumori Dragon", the "Devil Dragon" card. On the TV screen, Pegasus guesses that Yugi is playing "Koumori Dragon". Yugi, Grandpa and Jonouchi are surprised that a prerecording can know what cards Yugi has. Pegasus explains that he knew Yugi would play that card and he even knows the other cards in Yugi's hand. He says that Yugi was planning on combining "Koumori Dragon" with the "Dragon Knight" on his next turn to increase its power. Yugi is stunned and wonders if Pegasus can read his mind.

Pegasus says that they can't allow that combo and counters with "Dragon Capture Jar". "Koumori Dragon" is removed and sealed it in the jar. To Yugi's surprise the illustration on the card is sucked out and drawn into the TV screen. He quickly realizes that this is a Shadow Game, so the other Yugi takes over to continue the Duel. He thinks that this isn't going to be easy as he is facing the creator of the game. Pegasus smiles and a portion of an artificial eye is barely visible behind his hair.

Episode 2 of the anime, "The Gauntlet is Thrown" is based on this and the next two chapters of the manga.